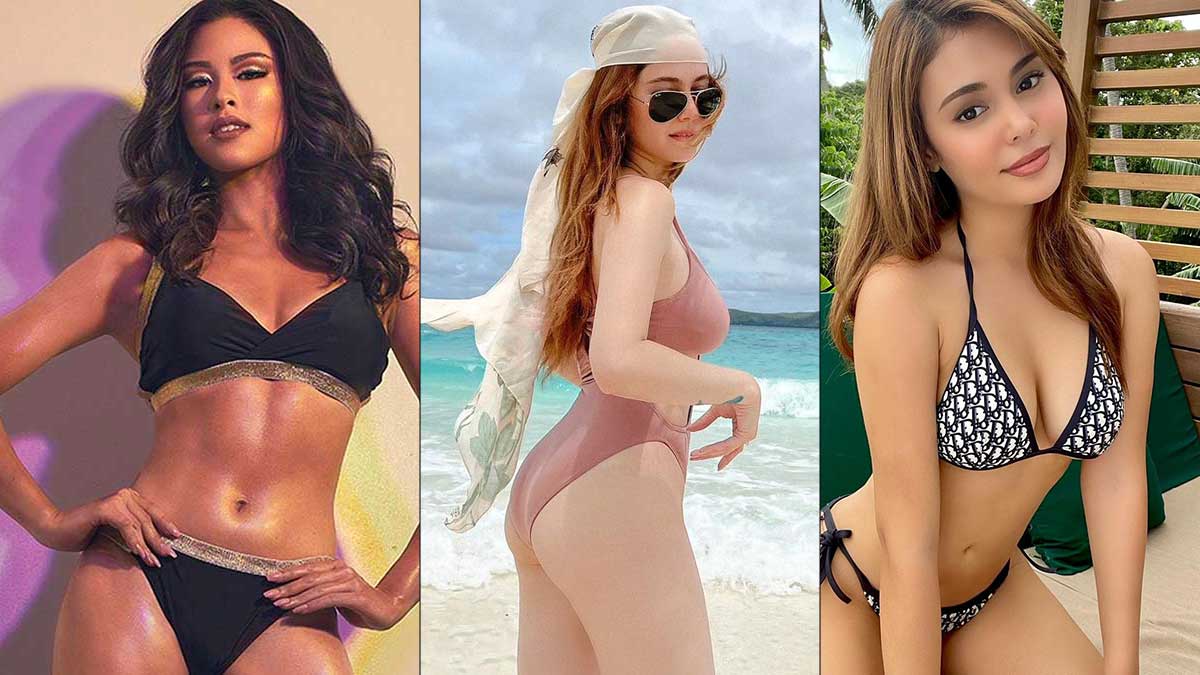 The year 2021 has seen some seriously sexy pictures of celebrities showing some skin and soaking up the sun in barely-there bottoms and skimpy bathing suits.

As a year-end gift, we’ve scoured the Internet for the most enviable bikini photos of your favorite local celebs over the past year.

Once more, for your drooling pleasure, here they are:

Soaking it up! Marian, a 37-year-old hot momma of two, is seen wearing a Fendi bikini near the beach in images shot during the Dantes family’s Halloween 2021 vacation in Amanpulo, Palawan.

“Kissed by the sun [heart emoji],” she captioned the viral photo on Instagram.

Aside from her figure, Marian’s followers raved about her flawless kili-kili. The post has garnered over 359,000 likes as of December 21, 2021, since it was posted last October 2021.

Count on Heart to make a bold move in her statement jewelry pieces! She was spotted at Balesin Island Club with some major Cartier jewelry worth about PHP10.7 million.

Pia has set our Instagram news feeds on fire over the past year with her sexy bikini pics.

Probably one of the sexiest ones is when the 32-year-old former beauty queen published photos of herself wearing an itty-bitty plum-colored bikini in August 2021.

“I stan my tan [emojis],” Pia said in the post, happily flaunting her tanned skin.

If there’s ever a time to go for a swim-ready appearance that’s dazzling and over-the-top, it’s now, and Ivana understood the assignment.

During her sister Mona’s birthday trip to The Farm in San Benito in Batangas last August 2021, the sultry actress sported a Dior swimsuit with the famed Oblique motif, the French fashion house’s signature logo that first appeared in 1967.

The bikini top and bottom are offered individually for USD410 on the brand’s official website. In pesos, that would be approximately 42,000.

Just when we thought yellow was summer’s staple color, we were proven wrong. Breaking the rules is never a bad thing, especially in the swimsuit sector.

Bea is seen in a scarlet red bikini in one of the photographs shared by a fan on Instagram. In November 2021, the 34-year-old Kapuso actress posted photographs from her calendar shoot on her Instagram account.

The advantage of being in the tropics is that you can go to the beach at any time of the year. Nadine Lustre is one celeb that takes full advantage of this.

Her swimsuit of choice is a halter bikini top, and she clearly packed a fashionable, albeit selected, outfit for her trip. For a variety of reasons, this specific style is attractive for her body type.

On September 2021, the singer is seen wearing an Issa the Brand x Blackbough Swim patterned bikini, and she is always sure to accessorize! For contrast, she wore the colorful ensemble with a basic Nike logo cap.

Kisses is dressed elegantly in a black two-piece ensemble that accentuates her abs. The picture was taken at the Henann Resort Convention Center in Panglao, Bohol, which hosted the pageant’s gala coronation night.

The 32-year-old celebrity mom’s slimmer physique and flatter belly became the talk of the town after she posted a photo on Instagram in October 2021.

The caption reads, “While everyone was sleeping [emoji]” wrote the Eat Bulaga! host. The photos were taken at Amanpulo, a luxurious beach resort in Palawan.

Large gatherings, body shaming, and nasty emotions are all things we’re not bringing with us into 2022.

The things we’ll do: practice self-love and self-care, which is precisely what Gabbi Garcia’s post is about.

On October 2021, the 23-year-old actress shared a selfie of herself wearing an olive green swimsuit and a wrap dress in the same hue.

“I used to be so shy & hesitant when it comes to wearing triangle-shaped bikini tops,” Gabbi admits in her caption. “But now, I learned to finally embrace it [sparkle emoji] Flaunt it and be proud [white heart emoji] #FlatandProud”

The actress is out and about living her best life. She looked stunning on the beach in a dusty pink one-piece.

The shot was taken at Amanpulo and posted via Instagram in August 2021.