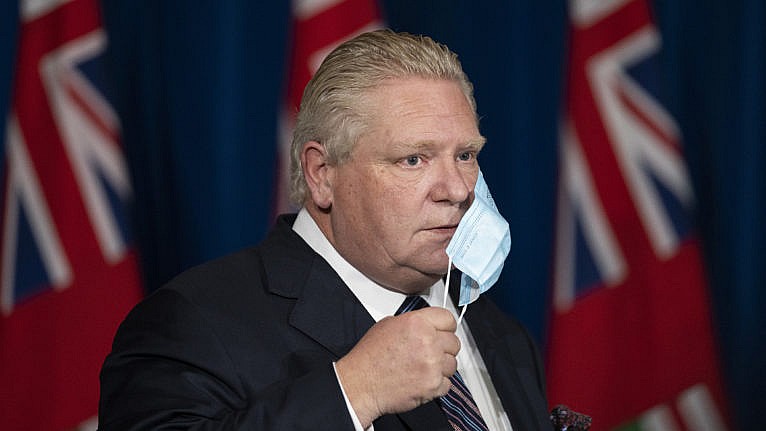 Philippe J. Fournier: The PCs still have the edge in our latest projection, but a collection of diverging polls suggest public opinion is in flux

With the Ontario provincial election campaign expected to be launched this spring, the state of the race between the main parties remains unclear, especially since polls in the latter half of 2021 showed significant disagreement. Lo and behold, there were no fewer than five Ontario polls released last week and, although I often quip that more data means a better understanding of the landscape, last week’s Ontario polls did little to clear the air. In fact, as you will see below, the picture could hardly be any blurrier.

Let us take a closer look at the main numbers from each polling firm (see the complete list of Ontario polls here):

(As an aside: The Quebec media and Twittersphere were set ablaze last week by a five-point disagreement between polls from Léger and Mainstreet Research: While Léger had Québec solidaire at 14 per cent, Mainstreet measured QS support at 19 per cent, tied with the Quebec Liberals for second place. Mere days later Angus Reid split it down the middle with 16 per cent. I hardly can imagine the reaction a 17-point spread would have created in media and partisan circles.)

What is there to make of such discrepancies in Ontario polling? Here is a comparative graph showing polls results and the adjusted 338Canada weighted average:

For the Ontario PC party, polls measure its support between 31 and 37 per cent province-wide, meaning current polling agrees that the PC stands below its 41 per cent result from 2018. While this six-point spread should be considered a modest polling disagreement, our electoral system invariably produces wildly different seat totals within this range of popular support. At 37 per cent (Abacus Data), the PC party would almost assuredly secure a second straight majority at Queen’s Park, whereas with support of 35 per cent or below, the most likely outcome would be a PC plurality—depending how evenly split the non-PC vote would be. This projection has the PC at an average of 35 per cent.

The Ontario Liberals stand at an average of 27 per cent, but, as mentioned above, there is a wild spread between where Innovative (36 per cent) and Angus Reid (19 per cent) estimate Liberal support. Naturally, this dramatically increases the uncertainty of the projection and, consequently, widens considerably the Liberal seat projection probably density. In fact, in the best-case scenario for the Ontario Liberal Party, it edges out Ford’s PC in seat count; in the worst-case scenario, it does barely better than in 2018.

The Ontario NDP also averages 27 per cent support in this projection. However, there once again is a major disagreement between numbers from Innovative (22 per cent) and Angus Reid (36 per cent). Angus Reid’s is the only poll of late that shows Andrea Horwath’s party above its 2018 result.

As for the Green Party of Ontario, the latest polls show its support as stable between 4 and 6 per cent. Its current average stands at 5 per cent provincially.

Here are the adjusted 338Canada seat projections. The Ontario PC party leads with an average of 59 seats, just below the majority threshold of 63 seats. Of note: The PCs are the only party whose upper confidence interval stretches into majority territory. In fact, the PCs win the most seats in 91 per cent of all simulations:

The Ontario Liberals and NDP are in a statistical tie with averages of 34 and 30 seats, respectively. Notice on the graph above how wide the Liberals’ brackets are compared to the NDP’s: this indicates the Liberal Party has a noticeably higher ceiling than the NDP, but also a much lower floor. In fact, by comparing the Liberal and PC seat probability densities, we see that the curves overlap:

… which means the Liberal Party’s seat total could rival the PCs’ with a modest overperformance from the Liberals. However, should the Liberals slip into third place, their seat harvest could easily fall in the low 10s.

As for the NDP, while it has more safe seats than the Liberals (bringing the party’s floor upwards), it is projected as competitive in fewer ridings than the Liberals. In the projection’s upper confidence interval, the NDP wins between 40 to 45 seats. Considering the NDP won 40 seats in the 2018 election, its potential for net gains remains limited according to current data.

Obviously, these seat projections are based on a weighted average of polls, so if either Innovative Research’s or Angus Reid’s numbers are closer to the reality on the field, the seat totals for each party would tilt towards the extremes. Taken alone, Angus Reid’s numbers (NDP +3) would most likely produce a very close result in terms of seats between the PC and NDP, leaving the Ontario Liberals barely at the threshold of official party status. If we take Innovative Research’s latest numbers (Liberals +1), the Liberals could even hope to win a plurality, thus unseating Doug Ford and relegating the NDP to a third party holding the balance of power.

Opinion polling tends to produce greater swings between surveys when public opinion is in flux, especially many months before election day. As the campaign approaches and news cycle tend to focus more on policy and state of the race, we expect numbers to tighten up and converge. We will follow Ontario polling closely in the coming months.

Details of this projection are available on the 338Canada Ontario page. To find your home district, use this list of all 124 provincial districts, or use the regional links below: