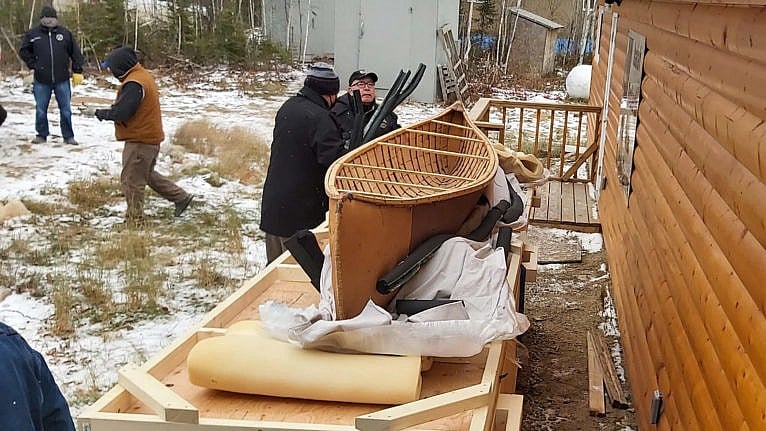 When Rose Roberts went in search of her Cree family’s birchbark canoe, she had no idea it was right under her feet, in the basement of the post-secondary institution where she had spent much of the past 25 years.

“It was very emotional,” says Roberts, after she had discovered that the family treasure was in the Archaeology Building at the University of Saskatchewan in Saskatoon. A graduate of community health and epidemiology, Roberts is now an educational development specialist at the Gwenna Moss Centre for Teaching and Learning.

The canoe, approximately 12 feet long, is the work of master builders Isaiah and Annie Roberts, Roberts’s grandparents. During the early 1970s, the Robertses made the canoe step-by-step using materials from the land for the film My Last Canoe, which was produced in Cree and English. Fluent Cree speakers, the Robertses are seen making the canoe in detail on the banks of Otter Lake, Sask. The Roberts family lived in Stanley Mission, one of six communities that are part of the Lac La Ronge band in north-central Saskatchewan, and Rose Roberts remembers heading into the bush in the summer with her family to collect the roots for the canoe.

However, shortly after the film was produced, the canoe disappeared.

‘A rush of memories’

In recent years, the family had been working to find out what happened to the canoe. Then, in February 2020, Roberts received an email from USask’s department of archaeology and anthropology, where the canoe was sitting on top of storage racks, untouched for years. It was brought from the basement to a workroom.

“As soon as I saw it, I had this rush of memories from that summer,” says Roberts.

Asked why the canoe disappeared, Roberts says she sees it as being part of a widespread phenomenon of Indigenous artifacts being appropriated for research and display by Western institutions.“They take our cultural items and house them for the purpose of education,” she says.

As a child, the Robertses’ granddaughter Rose helped collect roots for the canoe (Courtesy of Rose Roberts)

An unknown number of Indigenous artifacts are held in Canadian museums and academic institutions. The issue is addressed by the Truth and Reconciliation’s 67th call to action, which calls on the federal government “to provide funding to the Canadian Museums Association to undertake, in collaboration with Aboriginal peoples, a national review of museum policies and best practices to determine the level of compliance with the United Nations Declaration on the Rights of Indigenous Peoples and to make recommendations.”

Canadian academic institutions, which also hold uncounted Indigenous artifacts and ancestral remains, have been slowly repatriating them to their rightful owners over the past few decades. Some institutions have repatriation policies in place, such as the department of anthropology at the University of Toronto, or have one in development, such as the University of Manitoba.

While Roberts was inquiring about the canoe, Gerald McKenzie, a Lac La Ronge band councillor, was also searching for it, after talking about the canoe with Elders at a culture camp. McKenzie then contacted a few archaeologists at the University of Saskatchewan. Dr. Terence Clark, a professor in the department of archaeology and anthropology, eventually became involved. “It was obvious that it was theirs; there is video evidence of it,” says Clark. “It was a no-brainer; we just knew it had to go back.”

There is more work to be done to repatriate artifacts and ancestral remains, says Jas M. Morgan, an associate fellow at the Yellowhead Institute. For example, institutions must be transparent about their holdings. “It’s still a gate-kept industry,” says Morgan, who is the author of Yellowhead’s 2020 report, “A Culture of Exploitation: ‘Reconciliation’ and the Institutions of Canadian Art.” Morgan believes institutions operate in fear and require an overhaul. “We are beyond the possibility of ‘search and find’ initiatives into museum collections,” Morgan says, speaking on behalf of Yellowhead. The organization is working on a brief demanding that museums repatriate ancestral remains immediately and commit to Indigenous-led repatriation. The fact that most of the people overseeing Indigenous remains and artifacts are non-Indigenous, says Morgan, “speaks volumes.”

To repatriate the birchbark canoe and ensure it arrived safely at its destination, Clark built a wooden crate. Roberts did a small ceremony with the four medicines—tobacco, sweetgrass, sage and cedar—and placed them inside the crate before the canoe made the trip to its final destination. “It was really nice, there was no fanfare, no media,” says Roberts.

But the Lac La Ronge band incurred the cost of the transport.“The cost and the labour [of repatriation are] on the communities themselves,” Morgan says. Morgan says the federal government should provide dedicated funds for the return of cultural items and human remains to Indigenous communities.“We’re talking about human rights grievances, especially now with the unearthing of babies’ bodies at residential schools across Canada,” Morgan says. “What is the difference with our ancestors’ bodies in collections?”

The Yellowhead’s 2020 report, while noting specific provinces and institutions that have established repatriation policies—Alberta in 2000 and the Museum of Anthropology at UBC, for example—points out that no federal legislation governs repatriation. “There’s this dissonance there,” says Morgan. “There’s a discourse about the TRC, and then there are the actual actions of what is in the TRC. I think there should be repatriation acts.”

A sense of belonging

What does the birchbark canoe mean for the community?

“[It’s] to make sure we can have something to use to copy and to teach our culture [to the next] generations,” says McKenzie.

Today, the birchbark canoe is being stored in the Grandmother’s Bay school library, just over 100 km north of La Ronge. Eventually, it will be permanently displayed at the Isaiah Roberts Memorial Cultural Centre, which was named in honour of Robert’s grandfather.

On Oct. 23, 2020, an unveiling and ceremony took place. “It was kinda completing the circle for me when they opened it, and to be able to take the medicines and burn them in a clean fire,” says Roberts.

Roberts is grateful for the work universities are doing but says there is more work to do. “I think [the artifacts] should all be repatriated because they’re ours,” she says. “So many of our communities and youth are trying to find that sense of pride and belonging and knowledge, and I think we should be able to access that.”

This article appears in print in the 2022 University Rankings issue of Maclean’s magazine with the headline, “Returning the past to its rightful owners.”