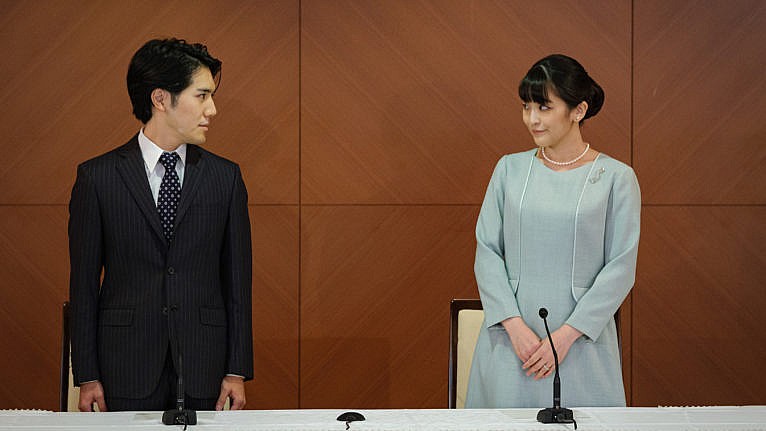 When Princess Mako, niece of Emperor Naruhito, married her university sweetheart, she swept aside family traditions, wearing a simple blue dress instead of a white gown at a press conference with her new husband, Kei Komuro. “I love Mako,” he said. “I would like to spend my one life with the person I love.” The couple endured a fraught four-year engagement, marked by intense, critical media scrutiny, disapproval by the public, Mako’s father and the Imperial Household Agency, which maintains tight control over the family. Japan’s imperial family is venerated by much of the public as the embodiment of the nation’s traditions, so any perceived impropriety by Princess Mako or her new husband is seen by some as a negative reflection on the country itself. “There was truly unilateral speculation. I felt fear about such spread, and I felt saddened as well,” she said at the press conference, in reference to the misinformation spread about the couple and their relationship. Almost from the start, Komuro was deemed unsuitable to be her groom as everything from reports of a $36,000 debt owed by Komuro’s mother to his pandemic ponytail (later chopped) were analyzed and dissected. Komuro finally went abroad in 2018, a year into their engagement, earning a law degree in the United States, where he now practices. Such was the furor that Mako, who worked at a Tokyo university, now suffers from post-traumatic stress disorder. In the end, the couple decided to carve their own path, eschewing even a dowry for Mako, who, like other royal women, loses her title and royal status upon her marriage. Yet family tensions remain. As Mako left the family palace, only her younger sister, Kako gave her a farewell hug. Now Mako is reportedly going to join her husband in New York, where he is clerking for a prestigious law firm, for a fresh start.

The post A wedding fit for a commoner appeared first on Macleans.ca.