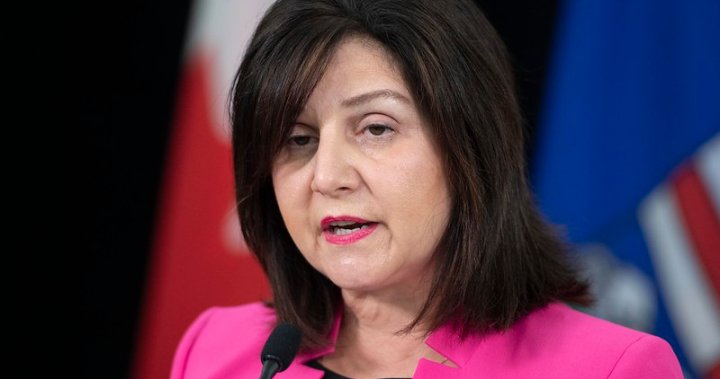 Alberta’s education minister says she “categorically denounces” a guidance document that recommended the province’s students learn about how the Nazi regime “strengthened” the German economy in the lead-up to the Second World War.

The document, published in January 2020 by the province’s education ministry, recommended teachers consider whether educational materials revealed “both the positive and negative behaviours and attitudes of the various groups portrayed.”

“For instance, if a video details war atrocities committed by the Nazis, does it also point out that before World War II, (the) German government’s policies substantially strengthened the country’s economy?” the document, titled “Guidelines for Recognizing Diversity and Promoting Respect,” read.

The document went on to note that most history books “dwell on the mistreatment of (First Nations) peoples by Caucasians and do not include any examples of non-(First Nations) individuals or groups actively opposing this type of treatment.”

“Without omitting or glossing over the many instances when members of one group have cruelly wronged persons of another group, the resource should attempt to provide some balance by presenting factors causing the behaviour or portraying positive qualities exhibited by members of the group that have acted inappropriately,” the document suggested.

The document surfaced online Friday morning and was immediately denounced by anti-hate campaigners.

Bernie Farber, the chair of the Canadian Anti-Hate Network, told Global News that it is completely appropriate to teach students about the economic conditions and factors of post-1919 Germany that led to Hitler’s rise to power.

What isn’t appropriate, in Farber’s view, is presenting that as a “positive” aspect of the murderous Nazi regime.

“If this was being presented as a document to teach the history of Germany from 1900 to the end of World War Two, of course you can’t ignore all aspects of it. But this is a diversity document, this is a document to explain to people how you have to be cognizant of and care for the welfare of the groups that you’re dealing with,” Farber said.

“So in other words, they’re saying you have to be cognizant of the welfare of Nazis … That nobody caught that in the entire education ministry of government is mindboggling.”

“It is shocking that the Alberta Ministry of Education would consider the genocidal Nazi regime as a good example of a group that had positive behaviours, given Nazis murdered six million Jews and millions of others, in addition to completely destroying their country because they initiated a war,” Michael Levitt, the president of the Friends of Simon Wiesenthal Center, wrote in a statement.

In a statement posted to Twitter, Alberta Education Minister Adriana LaGrange said she “immediately” instructed the department to remove the document from all Alberta Education materials when it came to her attention Friday.

“The wrongheaded views outlined have no place in our society and I categorically denounce what is written. There is not a ‘positive’ side to tell of the murderous Nazi regime, as this document wrongfully suggests,” LaGrange wrote.

LaGrange said the document has “nothing to do with the curriculum process” and that “under no circumstances would (her) office approve horrendous content like this being taught to Alberta students.”