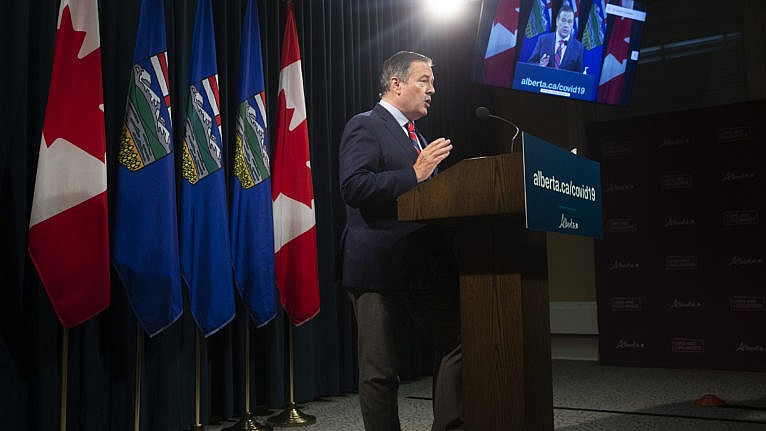 Albertans voted on Monday in a province-wide plebiscite calling for the equalization system (an area of federal jurisdiction) to be removed from the constitution, and while the results won’t be known for another week, it looks like it passed. Advocates say this should lead to reform in the program, the Post reports.

Kevin Lacey, the Alberta director of the Canadian Taxpayers Federation, described the referendum as one of the “biggest and most significant constitutional referendums” since the Charlottetown Accord’s failure in 1992. “Albertans delivered a clear message that while they’re willing to contribute to Canada, they won’t be taken advantage of anymore and the results show that Albertans want to stand up and they want to see change,” Lacey told the National Post.

Just a baby step: Political scientist Barry Cooper tells the Hill Times the next step ought to be a referendum on independence.

Not a big deal: Other political scientists, though, say the vote carries no legal weight and won’t force Ottawa to do anything.

“A change in the Constitution requires something close to total consensus right across Canada,” said Eric Adams, a professor at the University of Alberta specializing in constitutional law. “I don’t think it’s a surprise to anybody that Alberta is nowhere near reaching that consensus on equalization, and I don’t think that’s going to change.”

Waters muddied: In the Globe, Andrew Coyne argues amusingly that the rest of Canada should ignore the vote.

Moreover, the results in Alberta are anything but “clear.” Not only is the majority unlikely to much exceed 50 per cent, but the meaning of the vote was greatly muddied by the Premier, Jason Kenney, who insisted it was not about the question on the ballot – the one that he put there – but rather about giving Alberta “leverage” to demand changes to the program.

Again, this would be sufficient for the rest of Canada to ignore the result. A referendum on an explicit demand for a specific constitutional change is one thing, but a referendum that has been publicly and repeatedly described by its sponsors as a giant bluff practically begs to be disregarded.

Focus on seats: In the Calgary Herald, Rob Breakenridge argues persuasively that adding three seats to the House of Commons for chronically underrepresented Alberta will do more than the referendum to give Alberta clout in Ottawa.

New mayors: Edmonton and Calgary also elected new mayors, both of whom are of first-generation Canadians with Punjabi heritage.

Vaccine mandate on Hill: MPs will have to be vaccinated to enter the parliamentary precinct, the board of internal economy has decided, CTV reports. Will some Conservatives object? There is reason to wonder. The Western Standard likens the unjabbed to Soviet spies.

Paul, who announced last month she would resign, remains in the top spot as she negotiates with Green executives about compensation for costs incurred during legal battles with the party, sources say.

How they lost: Defeated CPC MP James Cumming is set to examine how Tories lost votes to both the PPC and NDP as part of his review of the recent election for the party, CP reports. “Anywhere that we’ve had bleed of vote, I think that that’s important that we study and understand what the factors were, so the PPC would represent some of that. In Alberta we saw significant bleed of vote to the NDP, so that’s an entirely different situation … in all cases we have to look at where we performed and where we didn’t perform and do that analysis on a riding-by-riding basis, region-by-region basis to better understand what the dynamics are within that vote.”