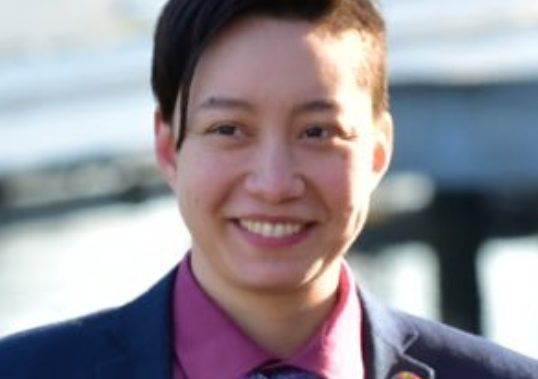 Amita Kuttner, the newly named interim leader of the Green Party of Canada, says their job is to “heal” the party after months of infighting and strife.

Kuttner, 30, who identifies as nonbinary and transgender, wants to bring an end to internal squabbles and get the party “back on track” before the Greens choose their next leader.

The astrophysicist from Vancouver says that, with flooding and climate change devastating the country, Green policies on fixing the planet are crucially needed.

“This is the exact moment that we need a Green party, with everything that is going on in the world,” said Kuttner, who was appointed to the role on Wednesday night.

In an interview with The Canadian Press, Kuttner admitted that some internal party politics had been “very nasty” and that a small minority of party members “have forgotten to treat each other as the full humans that they are.”

Kuttner revealed they had personally been the target of “brutal” transphobia, with Green members questioning not just their pronouns but whether they should be considered transgender at all.

“I would like people to actually know that I don’t mind if you mess up my pronouns. I just want you to recognize me as a human, a person, an individual that is deserving of respect and dignity,” Kuttner said. They said they are also currently undergoing transition-related medical procedures.

3:05
‘We have entered the world of a climate emergency:’ Elizabeth May calls for national effort to take on climate crisis

‘We have entered the world of a climate emergency:’ Elizabeth May calls for national effort to take on climate crisis

Kuttner said that understanding why people were angry and what motivated them was a key to resolving conflict, as well as a “willingness to show up to learn.” They said that being so passionate about threats to the planet could affect people’s outlook.

“My approach to healing is trying to find common ground,” Kuttner said.

“We are all are in this because we care about the same things. We are tied together by our values and the fact that we deeply care about our community.”

Public support for the Greens plummeted in the Sept. 20 election and then Annamie Paul quit as leader. Paul, who is Black and Jewish, said she was the target of vitriol, faced racist and sexist accusations from within the party, and her time as leader was the worst period in her life.

Kuttner said they are resilient.

“Everything that has been going on for the last year and how everybody is feeling in the party — healing is a big part of it,” they said.

“They’re just a really extraordinary human being, and I love working with them. I love them,” May said.

“And of course, the groundbreaking aspects of being a racialized young person who is non-binary, who is a genius scientist — you don’t run across people like Amita every day.”

According to the Green Party’s constitution, a leadership contest must start within six months of the appointment of an interim leader.

May says she hopes the process will “reflect that reality of our values.”

“The job is to be the chief spokesperson, and our membership decides the policies,” May said.

The party has “a lot of rebuilding to do,” May added, after “the last disastrous period.”

“I feel so happy because I know that, the minute the interim leader is appointed, I feel like, OK, this is turning the page,” May said.

“Canadians can see the face of people in the Green Party, of people who are positive and committed and rebuilding, and that’s what we really, really desperately needed.”

As leader, Kuttner said they wanted to “put in a system to protect ourselves from internal discrimination and external discrimination.” This could include amending the party’s code of conduct so Green members are not instantly thrown out but taught about differences and how to respect them.

“People say the party as an organization is not responsible for random members having horrible opinions and being willing to hurt people, but in the end, they are,” Kuttner added.

Kuttner said their “general approach to politics” was collaborative and “consensus-building” to get things done.

Kuttner is the child of a Chinese mother from Hong Kong and an English father. They said they were “pulled by multiple cultures and traditions” and would “approach things differently based on my age and my gender and my race.”

In 2005, Kuttner’s mother was killed and their father was seriously injured after a mudslide crushed their North Vancouver home.

“I just turned 14 when I lost my home and my mother,” they said. They said it was “a rift on my life and my entire neighbourhood.”

The new interim leader said they were “committed to learning” in the role.

9:54
‘We have to do more and faster:’ Green MP Elizabeth May on COP26 commitments

“Just because I am marginalized and have multiple identities, it doesn’t mean I don’t have things to learn and it does not mean I won’t make mistakes,” they said.

Kuttner, an expert in black holes, was brought up in Vancouver and educated at a boarding school in California. They gained a PhD in astronomy and astrophysics from the University of California, Santa Cruz.

Kuttner said they believed that in future centuries humankind could become an “interstellar species” travelling to distant planets. But to do this humankind would have to work hard to ensure planet earth survives.

“It’s going to take hundreds of years and if we are going to get there we need to survive the next few (hundred years) and that means having a way of life that is actually, very literally, sustainable.”