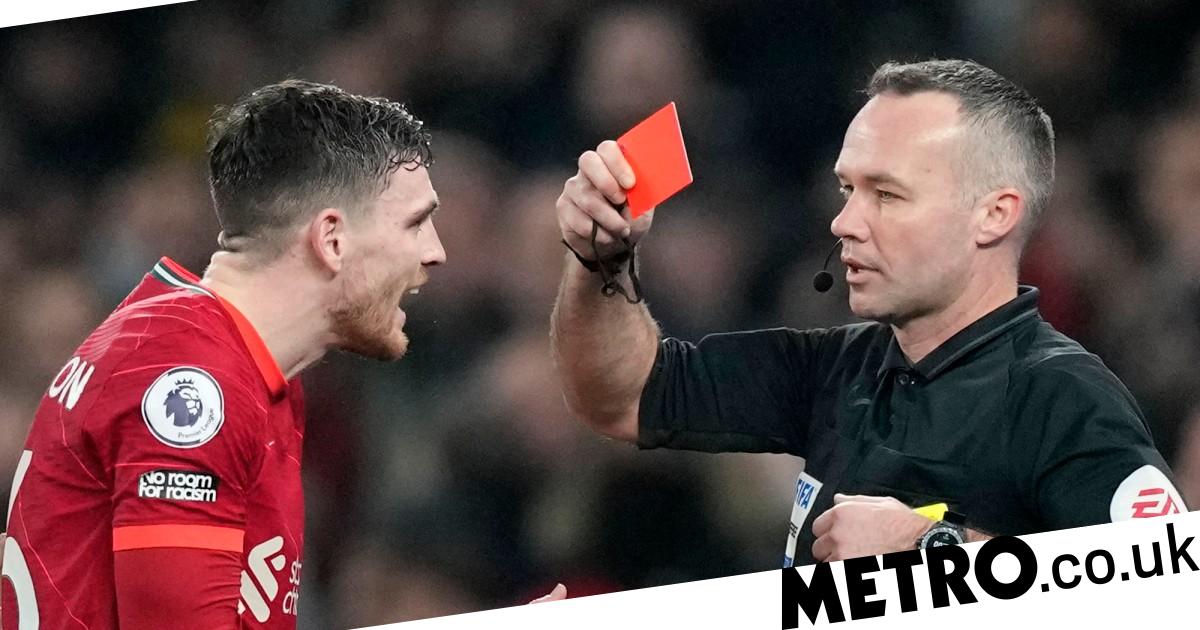 Andy Robertson admits his red card tackle in Liverpool’s 2-2 draw with Tottenham was ‘poor and misjudged’.

Robertson was sent off in the second half for his challenge on Emerson Royal, although Liverpool were furious after Harry Kane was not dismissed in the opening 45 minutes for his tackle on the Liverpool left-back.

Jurgen Klopp’s side were able to hold on for a point against Spurs but they are now three points behind Premier League leaders Manchester City.

‘I was brought up to take responsibility when you’ve done something wrong and I have to admit my challenge was poor and misjudged. My mistake giving them the chance to make the decision. Gutted!’ Robertson posted on Instagram after the game.

‘Probably best I don’t speak about other things in the match, other than to say how proud I am of the rest of the team. Me aside, the boys were different class in unbelievably difficult circumstances.

‘Support unreal as well in difficult times! Wish we could of rewarded it with a win! Stay safe, YNWA.’

Klopp also agrees with Robertson’s red card but was furious with the decision to keep Kane on the pitch and referee Paul Tierney’s call to turn down Diogo Jota’s penalty shout in the first half.

‘We saw it now back and, yes, you can give a red card there. It’s not the harshest ever but it’s not the smartest as well,’ said Klopp.

‘He knows that and he’s a really good boy but he lost it a little bit, so this red card you can give.

‘But this is the proof that the VAR was there today because before that we thought he might not be in his office, because the two other situations I think we all agree now that Harry Kane should have seen a red card and he didn’t.

‘And the penalty situation, Mr Tierney told me that he thought Diogo Jota stopped on purpose, he wanted to get hit. If you watch this situation back, that’s a very exclusive view and it’s really difficult to do these things that quick. It was a very quick decision of him, you could see that he saw it and was directly like this.

‘I’m not sure if he was prepared for it or whatever but if you watch the situation, how can you react that quick? It’s a clear penalty but he thought it’s clearly not a penalty. Wow.

‘That’s obviously two wrong decisions of him, I would say, and one right, all three against us.’