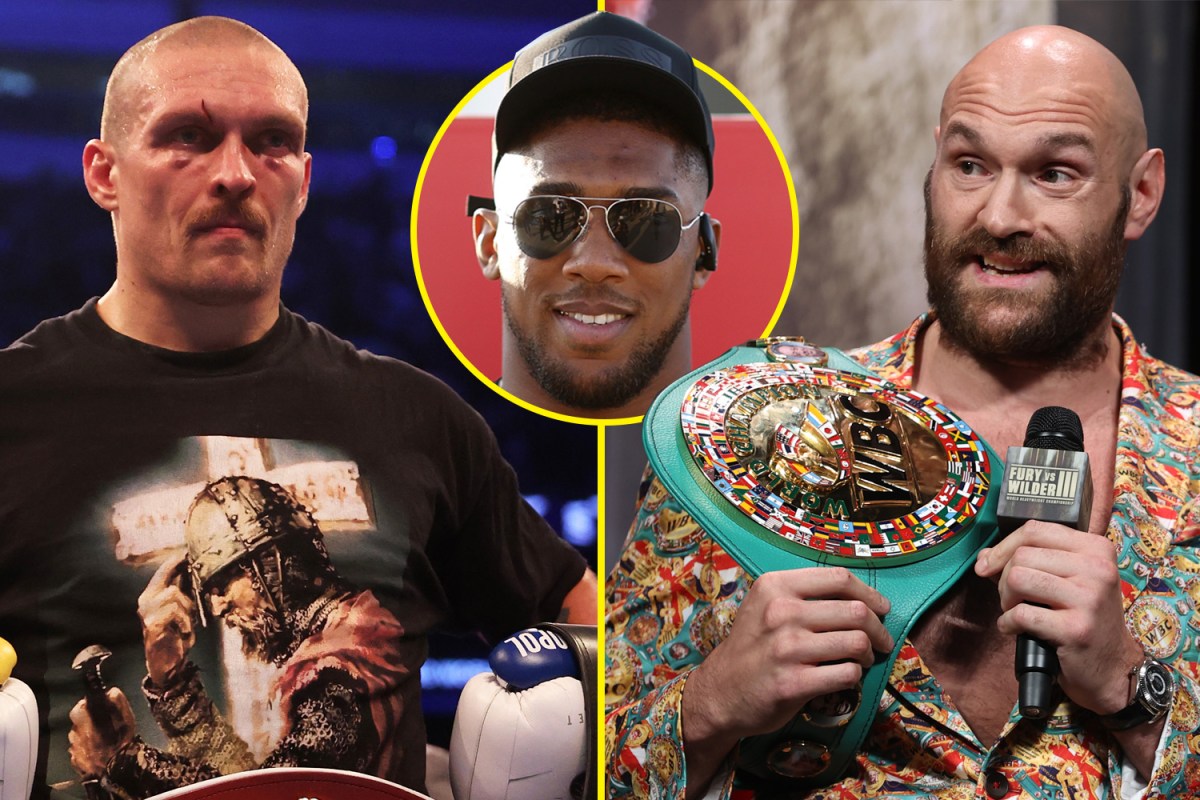 Anthony Joshua may accept a multi-million pound payout to step aside to allow a showdown between Tyson Fury and Oleksandr Usyk.

The plans for an all-British undisputed fight between AJ and Fury were scuppered when the former lost to Ukrainian Usyk in London last year.

The Gypsy King held up his end of the bargain by beating Deontay Wilder in his trilogy fight to retain the WBC heavyweight title.

Joshua activated his rematch clause to face Usyk again in a bid to reclaim his WBA, IBF and WBO belts, with that fight due to take place in April.

The idea had been mooted for some time that AJ could step aside, for a substantial payout, and then fight the winner.

The Telegraph report the 32-year-old is now ‘close to accepting’ a £15million payout that would pave the way for a Fury vs Usyk showdown.

But Joshua has hit back at the reports, saying: “You know what’s bad about all these interviews I see, I see certain interviews that quote what I said and I think to myself ‘I ain’t done no interviews’. Where did this person get this information from?

“I’m hearing people saying ‘AJ accepts £15m to step aside’. I ain’t signed no contract. I ain’t seen no contract. Stop listening to the b******* until it comes from me.

“I’m the man in control of my own destiny. I’m the man that handles my business. I’m a smart individual and I make calculated decisions every step of the way.

However, Joshua stepping aside has not been ruled out by his promoter, Eddie Hearn, who said on Monday: “I’m meeting with AJ and 258 management [on Tuesday] to go through plans for his next fight.

“We have a number of proposals and options to discuss. The goal remains the same of course – to re-capture the world heavyweight crown.”

The Middle East has been touted as a potential location for Fury vs Usyk, which would give boxing it’s first undisputed world heavyweight champion since Lennox Lewis in 1999.

Usyk’s promoter Alex Krassyuk said: “We are in talks regarding Tyson Fury since November. Though Anthony Joshua gave his consent [reportedly] we still have not reached final point in negotiations.

“Unless we get it – AJ rematch remains the basic option for us.”

One potential stumbling block from the Fury side could be the situation surrounding Dillian Whyte.

Whyte remains in a prolonged legal battle with the WBC over his mandatory title shot.

The sanctioning body ruled that the bout would have an 80/20 purse split in Fury’s favour, if it goes to purse bids.

Whyte’s team were campaigning for a split of 55/45, and intend to contest this ruling with a WBC appeal or arbitration hearing.

As a result, the purse bids have been delayed multiple times.

Fury’s co-promoter Bob Arum told talkSPORT that the situation was far from ideal.

“What’s happening is just promises coming out of the Middle East about doing a unified fight with Usyk and Fury, and is Dillian Whyte gonna step aside.

“And people that have absolutely no contractual ties – like Frank Warren’s Queensberry and our Top Rank do – are getting involved.

“It’s a typical terrible kind of situation, but hopefully it’ll get sorted out.”