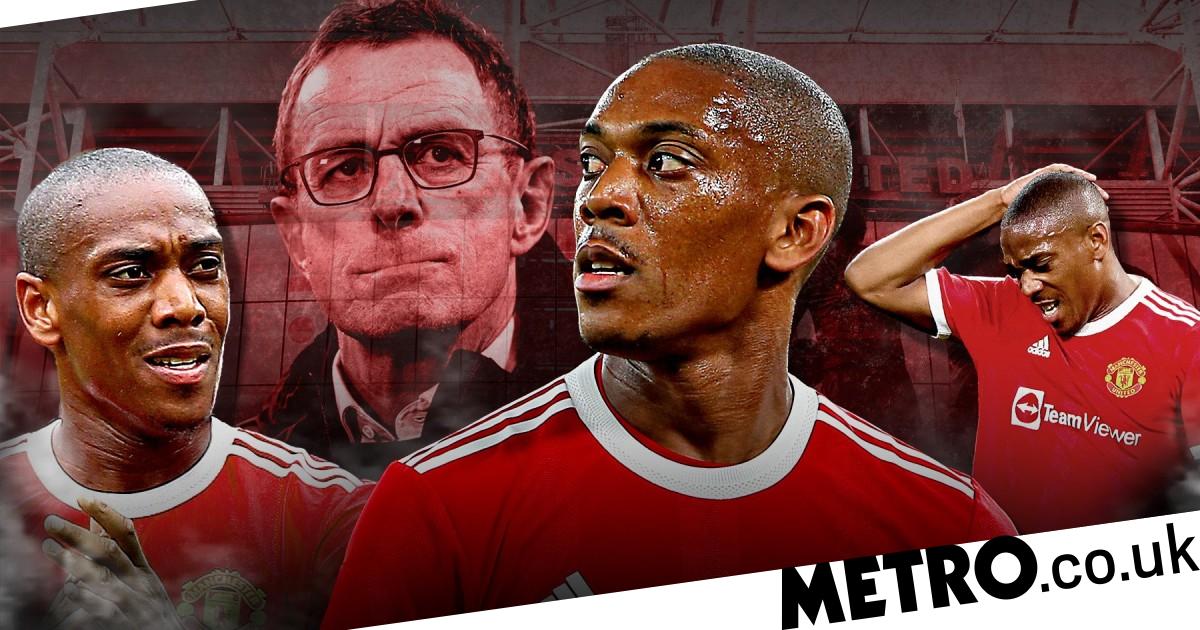 If you were looking for a single figure to sum up Manchester United’s malaise in the last decade, you wouldn’t be short of options.

From a deadline day dash to sign Marouane Fellaini in 2013 to the £6m loan signing of Radamel Falcao, United have made blunder after blunder since Sir Alex Ferguson’s retirement.

But while there’s been countless failures, nobody quite symbolises United’s decline quite like Anthony Martial.

The Frenchman arrived at Old Trafford in 2015 as a relative unknown. The fact United spent an initial £36million on him suggested the club thought they had found a gem, while Monaco were so sure of his potential that they demanded the inclusion of a ‘Ballon d’Or clause’ that would see United pay an extra £5m should he win the most prestigious individual award in world football during his time at the Theatre of Dreams.

Just a month after his arrival at the club, Louis van Gaal said United had decided to spend so much on Martial because he was ‘for’ his assistant Ryan Giggs, who was being lined up as the Dutchman’s successor. It looked money well spent when Martial scored a stunning goal against Liverpool on his debut and he finished his debut campaign as the club’s top scorer.

I have not bought Martial for me, I have bought him for the next manager of Manchester United.

But fast forward six years and five different managers, and there’s a strong argument that Martial’s career has barely progressed. The forward’s suffered dramatic losses of form, failed to find his strongest position, angled to leave under two managers and Ralf Rangnick is just the latest coach to decide Martial is not cut out for life at the club.

The Frenchman felt compelled to hit back at Rangnick on social media last weekend after the German appeared to suggest Martial was unwilling to play in United’s 2-2 draw against Aston Villa.

Rangnick did his best to clear up the situation, insisting it was a case of his words being lost in translation and Martial was subsequently reinstated to the squad for the win against Brentford.

But he watched on from the bench, remained an unused substitute throughout as Anthony Elanga impressed with the type of can-do attitude and work-rate that Martial lacks. With the league campaign past the halfway mark, Martial has just one goal to his name in all competitions.

There have undoubtedly been bigger failures at Old Trafford in the last nine years but Martial’s inability to fulfill his promise makes him the perfect embodiment of the post-Ferguson years. He would be no great loss if he gets his wish of leaving the club.

It was always going to end in tears but even the most cynical of Evertonians couldn’t have foreseen Rafael Benitez’s reign ending so quickly.

The Spaniard’s history with rivals Liverpool meant he could barely afford a slip-up in the blue half of the city but in-fighting, poor decision-making and a distant approach meant Benitez’s marriage with supporters was doomed from the start.

But Benitez’s failure is as much on the club as it is on him. Owner Farhad Moshiri knew what style of play Benitez would bring with him to the club and he backed him to make wholesale changes behind the scenes, dismissing chief medic Danny Donachie, Director of Football Marcel Brands and Head of Recruitment Gretar Steinsson after power struggles with the Spaniard.

Ultimately Benitez was a move away from supporters’ demands and for the second time in three years, Duncan Ferguson has been made caretaker manager in a bid to restore some pride to the team. The Scot wants the job on a full-time basis but Moshiri’s shortlist shows the lack of direction that’s crippled the club in recent years.

Roberto Martinez has been targeted, four years after he was dismissed for losing the dressing room and making a string of poor signings. Alongside Martinez, the Toffees want to speak to Jose Mourinho, while they plan on interviewing Frank Lampard and Wayne Rooney.

The four candidates couldn’t be more different but of them all, Rooney is the only one worth considering.

That Rooney is even a candidate for the job so soon into his managerial career speaks volumes of his rapid progress. Derby County are eight points from safety in the Championship, despite being handed a 21-point reduction earlier in the campaign. That verdict appeared to consign the Rams to relegation but Rooney has inspired the players to put them in with a fighting chance of remaining in the league against the odds.

That in itself says much about Rooney’s capabilities as a man-manager, particularly after the squad’s performances under Philip Cocu. After dealing with the turmoil of being hit with a 12-point deduction, Rooney had to contend with a further nine-point penalty in November that left his side on -3 points and 18 points from safety.

Another manager would have been tempted to jump ship but Rooney has amicably dealt with the turmoil, contending with problems upstairs at board level that would have troubled managers with far more experience than him.

Though Rooney is understandably keen to see out the season with Derby as the Rams could achieve something no other side has before, he would struggle to turn down his boyhood club and Everton should harness that love he has for the Toffees before the offers come in from elsewhere.

Graham Potter is destined for the top-six

It didn’t take a draw against Chelsea to prove his credentials as one of the finest managers in the Premier League but it’s another feather in Graham Potter’s cap.

Truth be told, the Seagulls have played better on several occasions this term but it speaks to their progress under Potter that they’re unbeaten against Thomas Tuchel’s side this season.

Tuchel’s admiration of Potter is clear and the German was quick to deflect criticism of his side and instead praise for the Seagulls on Tuesday night.

‘We have to respect the opponent. It is very, very tough to play at Brighton,’ said Tuchel.

‘They played it like a cup game and the noise at the final whistle was as if we’d lost the game. This can very give you the impression we lost and we didn’t lost.

‘Other teams will struggle to get points here. It is tough when you are at full strength and are not tired. So there are some obstacles to overcome and I refuse today to be angry because it’s not about our ambition or our want.’

Brighton have lost just four times in 21 games this season, a record bettered only by Liverpool, Manchester City and Chelsea.

But Brighton’s results are just part of Potter’s story, with the former Swansea boss transitioning the club’s style of play away from Chris Hughton’s pragmatism towards his own attacking brand.

It is hard to be a sexy name when you are called Potter, especially if your first name is Graham

With such limited resources at his disposal, it’s a triumph in itself that Potter can blend results with such style.

Potter has ambitions to manage at the top but opportunities are scarce, particularly with the likes of Pep Guardiola, Antonio Conte, Jurgen Klopp and Thomas Tuchel occupying four out of the top six clubs.

Manchester United and Arsenal look his only viable short-term options but the trajectory of Potter’s long-term is only heading in one direction and that’s up.


MORE : Diego Carlos speaks out on his future as London club rival Newcastle for Sevilla defender