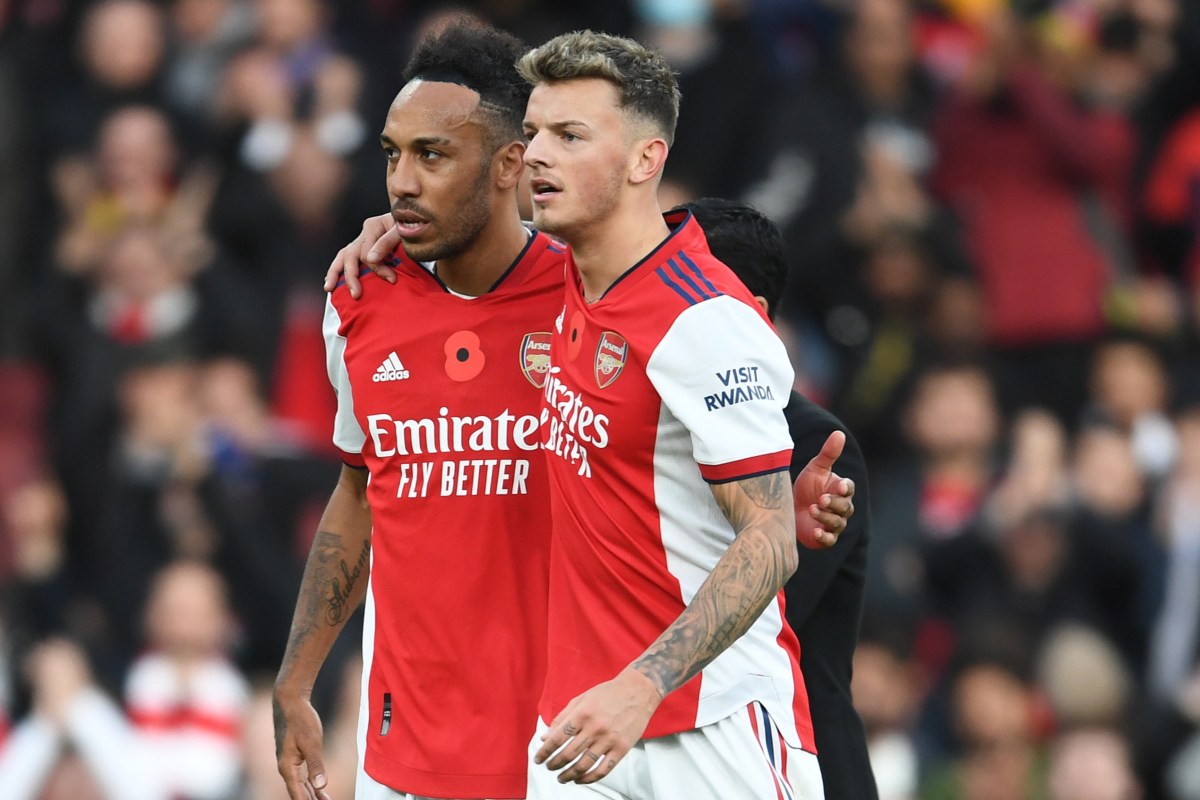 Ben White has told talkSPORT the Arsenal players are missing ‘nice guy’ Pierre-Emerick Aubameyang with the striker still in exile from the Gunners first team.

And the centre-back feels he has some of the right qualities to be captain, amid claims the summer signing is a contender to succeed the striker as the club’s next full-time skipper.

Aubameyang’s Arsenal future is in doubt after Mikel Arteta dropped his captain due to a ‘disciplinary breach’.

The 32-year-old has not made an appearance since the Gunners’ Premier League defeat to Everton on December 6, and has been strongly linked with a move away from north London in the January transfer window.

He’s the latest player to fall foul of Arsenal’s captain ‘curse’, with the debate raging on over who could be handed the armband next.

With an apparent lack of leaders in the squad – the words of Arsenal legends, not us – the likes of White and fellow summer signing Aaron Ramsdale have been linked with the role, despite not yet being Arsenal players for a year.

The centre-back responded to those suggestions in an exclusive interview with talkSPORT host Jim White ahead of the Gunners’ Boxing Day trip to Norwich.

And while he said it would be an ‘honour’ to lead the team, he says the whole squad are missing the presence of their teammate.

Asked if the Aubameyang situation has been a distraction for the in-form team, White said: “It hasn’t really looked it on the scoresheet. We’ve been playing well.

“Obviously it’s disappointing for Auba but we’ve all got our heads down and we’re working hard.

On the suggestions he could be Arsenal catpain, the £50million man said: “I’ve never done it before, but it would obviously be an absolute honour to be captain.

“I think I’ve got some of the qualities to be captain, but we’ll see in time.”

White also revealed all about Arsenal’s exciting young squad, Arteta’s man-management and the pressure of his north London move.

Speaking of that £50m transfer, White said he didn’t feel the pressure of his high price tag, but admitted to getting a ‘kick up the arse’ after receiving heavy criticism from the press after his Arsenal debut, which ended in a humiliating defeat.

“It’s a weird one – I’ve been asked this question before and I’ve spoken to my mum about it, she asked me the same thing,” he said about the pressure of his transfer from Brighton.

“It’s not really anything to do with me. I don’t decide the price tag, it’s not anything that I’m involved in.

White made his Arsenal debut against Brentford and was ‘hammered’ for his display, as the Gunners lost their opening game of the new campaign against the newly promoted team.

It was Brentford’s first Premier League game in their history.

“It wasn’t ideal,” White said. “I got hammered in the press and it obviously wasn’t nice.

“But it gave me a little kick up the arse to get back out there and show them why I’m at Arsenal.”

White also spoke highly of Arsenal’s bright young team, who head into Christmas back in the Premier League top four and into the semi-finals of the Carabao Cup.

The Gunners boast an impressive stat of their youngsters delivering in front of goal – their last 18 league goals have been eiter scored or assisted by a player under the age of 23, with 21-year-old Smith Rowe their top scorer in the league this season with eight goals, plus two assists.

“We’ve got a young team, there are so many squad members who can play and the guys who have been playing have been performing,” added White, who also heaped praise on Arteta, his attention to detail and man-management.

“Aaron [Ramsdale], B [Bukayo Saka], Emile [Smith Rowe] – we’re getting really close together and all we want to do is win, and trying to get into the habit of doing that is important.

“We’re building our way up slowly and we’re hoping to be there [back in Europe] this season, but we’re taking each game as it comes, we’re not getting ahead of ourselves.

“We’re doing well at the moment, but that might change. We’re just trying to get three points in every game, and then move onto the next one.

“We’re focusing on ourselves. The teams around us are going to do their best, and we’ll be doing the same.”

“I’ve had a few managers and I’d say his man-management is the best I’ve been under. Every player is different and needs different things, and he definitely understands that.

“He’s a top manager and it’s showing – we’re getting the results now.”

Norwich vs Arsenal is LIVE and EXCLUSIVELY on talkSPORT on Boxing Day – tune in for live festive commentary!