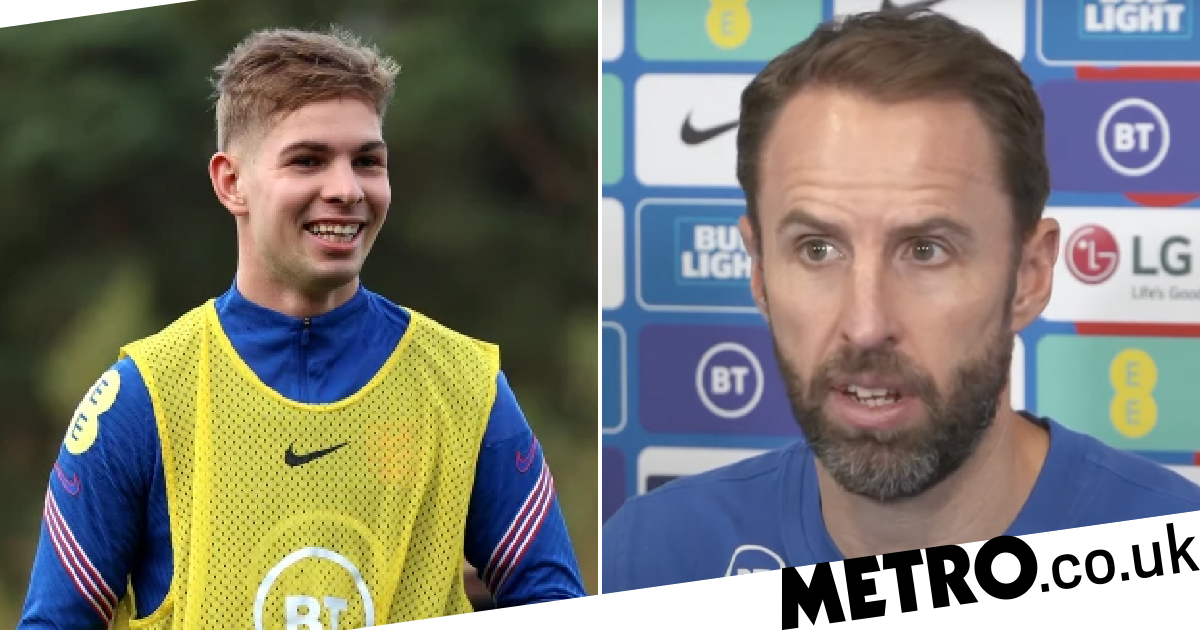 Gareth Southgate has hinted Emile Smith Rowe could make his senior England debut in the side’s upcoming World Cup qualifier against Albania, with the youngster already making a big impression with his ‘quality’ in training.

Smith Rowe put himself firmly in the frame for selection on the back of an eye-catching start to the season with Arsenal, scoring in his last three Premier League games for his boyhood club.

But the 21-year-old missed out on Southgate’s initial 25-man party for England’s upcoming games versus Albania and San Marino and was instead named in Lee Carsley’s Under-21 squad.

However, Marcus Rashford, James Ward-Prowse and Declan Rice are all struggling with illness and Smith Rowe was called up for the first time as a replacement, joining up with his new team-mates at St George’s Park on Monday.

Competition for places is fierce given Southgate has an embarrassment of riches to choose from in the attacking areas of the pitch, but it appears Smith Rowe could be given the nod at Wembley tomorrow night.

‘We’ve brought him here to be involved with the team with a view to being involved in the two matches,’ the England head coach told reporters at his pre-match press conference.

‘He’s settled really well. I think he obviously knows a couple of his club team-mates, Phil from when he was in the Under-17s as well, and this is a group that makes young and new players very welcome.

‘I don’t think it’s a difficult environment to fit in, his quality has been apparent in the way that he’s trained so he’s ready.

‘We’ve enjoyed having him with us already.’

Key squad members pulling out has threatened to derail England’s final push for Qatar 2022, but Southgate is pleased with the level of performance he’s seen in training.

‘Training has been very good. We’ve obviously had quite a few players who have had to withdraw from the squad, but we’re used to dealing with that,’ he added.

‘It’s never straightforward and we’ve just got on with it. I don’t think anyone here would have felt anything unusual in the way we’ve prepared.

‘I’ve been really happy with the level of training and the attitude of the players and I’m looking forward to tomorrow.’

England require two points from their two games with Albania and San Marino to guarantee their place at next year’s World Cup.

Southgate is wary of the threat posed by a ‘very well organised’ Albania side, who sit third in Group I ahead of their meeting under the Wembley arch.

‘We’re obviously very aware of the team from not only our game there, but also their other matches in the group which we’ve watched closely,’ he went on.

‘They’re a very well organised team, the coach has done an excellent job, quite familiar patterns of play.

‘Across the qualifying campaign there have been quite a few changes within the team as well so we never focus too much on individual players, we’re always talking about the patterns and the collective way of playing. That doesn’t matter if we’re playing any other nation.

‘Maybe if you have a particular player who favours a particular foot that you go into a bit more detail on or a particular attribute. that needs watching from a defensive aspect or something we can exploit defensively.

‘But we prepare the same way for every game we play and we always have that respect for the opposition.’