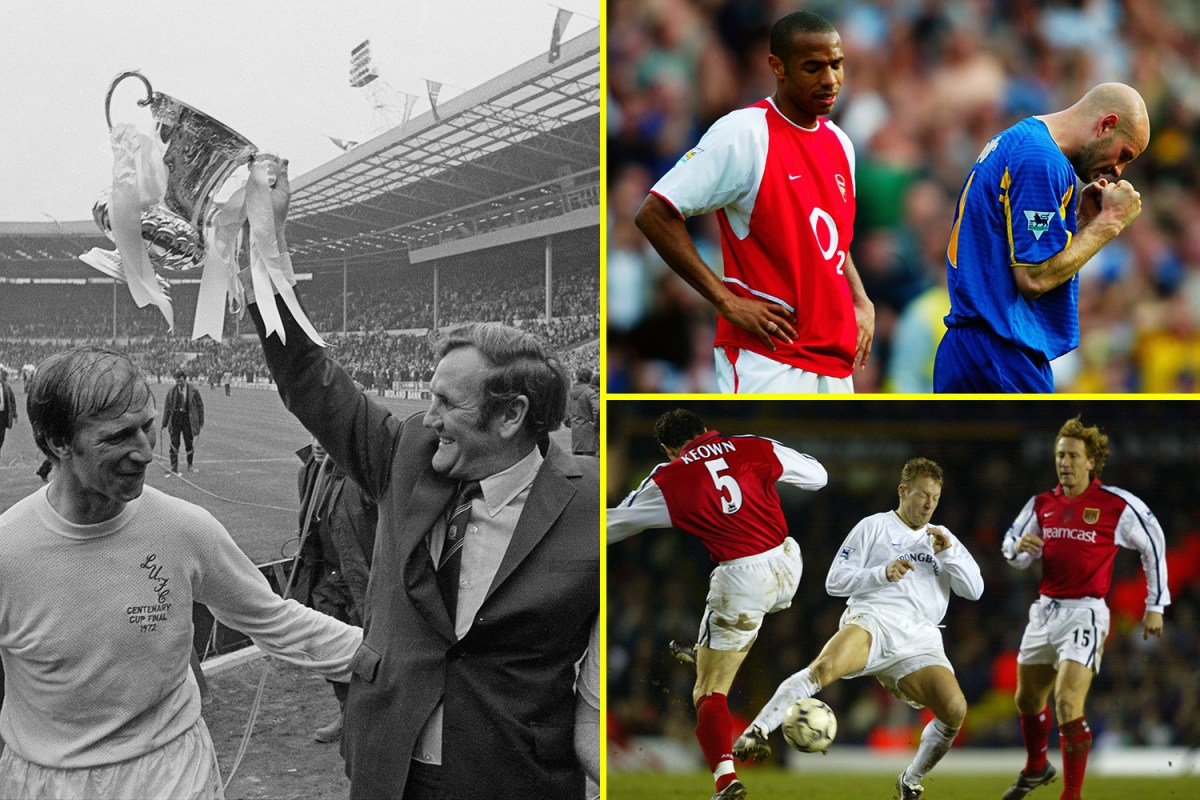 It’s 1998 at Highbury. Arsenal are beating Leeds 3-1. But more importantly, a ferocious little teenager is about to reignite a rivalry which had been long forgotten.

Alan Smith, like an actual Yorkshire terrier, yapped and scrapped his way underneath Arsenal’s skin in just 15 minutes from the bench, showing utter disregard for two icons in Tony Adams and Martin Keown.

“Those players took exception to that,” former Leeds full-back Danny Mills recalls. “It was almost unheard of. You didn’t do that. And it sparked a little bit of a rivalry.

“When we went away with England, we used to wind up Keown something atrocious. Sometimes him and Smithy had to be kept on the same team in five-a-sides and little games.

“Martin was no shrinking violet and the lads would get into his ribs: ‘Martin, you got bullied by a little kid? Are you going to let that happen?’”

As Giles Grimandi got sent off for headbutting the 18-year-old, the tone was set for what would become one of the most violent fixtures in English football for the next five years.

Between that game in 1998 and 2001, the seven matches between Arsenal and Leeds saw four red cards, more than 50 yellows, and three consecutive FA investigations.

Things got so heated between the two clubs that FA chief executive Adam Crozier had to issue a statement in 2001.

“It is something the two clubs have to do a little bit of work on – it is not healthy to have that kind of rivalry going on.”

Crozier’s statement came after Leeds had just beaten Arsenal 2-1 at Highbury, finishing the match with nine men after Lee Bowyer and Mills got sent off, the latter for trying to play a one-two off Ashley Cole as the Gunners full-back lay injured on the turf.

“I thought it was quite clever,” Mills tells talkSPORT.com. “I didn’t boot it at him, it was a tiny little tap.

“The problem is Ash is quite skinny and it didn’t go out of play – it came back off his bony backside into play and Patrick Vieira came steaming in over the top. Then it all kicked off.

“There was a TV room in the tunnel at Highbury, so I was in there with Bowyer and Smithy watching the lads win.

“Jeff Winter [the referee] came up the tunnel and he’s getting all sorts of abuse, emotions are highly charged. Things were said. It was industrial language, as it always was, and Jeff reported it to the FA.”

While geography renders a rivalry between Leeds and Arsenal quite strange, history makes more sense of it.

Back in the late sixties and early seventies, Don Revie built a physical Leeds side which bordered on dirty – and they fought the Gunners for everything.

As former Arsenal midfielder Ray Parlour tells talkSPORT.com: “They were far worse in the seventies – that’s when they really used to smash into people!”

The Whites beat Arsenal in the final of the 1968 League Cup, the north Londoners edged a thrilling title race in 1970-1971 when only one point separated the two sides, before Leeds got their revenge in the 1972 FA Cup final.

Describing Arsenal’s 1-0 defeat in the FA Cup final, one reporter wrote: “The game itself was as dismal as all the other Arsenal-Leeds games had been: the two teams had developed something of a history, and their meetings were usually violent and low-scoring.”

Although the sides barely met in the post-Revie years, their volcanic relationship was merely dormant, lying in wait for two decades, ready to erupt.

Tensions began to simmer in the mid-nineties when Leeds appointed former Arsenal boss George Graham following his acrimonious exit from Highbury, with the Gunners’ record appearance-maker David O’Leary as his assistant.

But it was only when O’Leary took over as manager at Leeds in 1998 when it got really tasty.

Mills says: “If you speak to a lot of Arsenal players, O’Leary wasn’t the most popular man. Maybe there was a little bit of that hanging over. Maybe they hyped it up.”

It had all the ingredients for ferocity: Highbury and Elland Road. Two outrageously physical teams. History. And it was personal.

Under O’Leary, fairly or not, Leeds redeveloped their ‘Dirty Leeds’ reputation through hard nuts like Bowyer and David Batty.

“We weren’t dissimilar to the Leeds team now, we played with a high tempo and we were aggressive. If you wanted a physical battle, bring it on.”

And Arsenal weren’t innocent, either. “They were very talented, an exceptional team,” Mills continues. “But they were physical. And we were happy to go toe-to-toe with them.”

Mark Viduka’s arrival in 2000 added extra spice to the rivalry, and like Smith, it’s fair to say he didn’t get along with Keown – who received a £10,000 for elbowing the Australian in 2001.

But Leeds weren’t just a dirty side on a wind up, far from it. This is a team that reached the Champions League semi-finals in 2001, with the likes of Rio Ferdinand, Jonathan Woodgate, Harry Kewell and Viduka at their disposal.

Indeed, Leeds twice denied Arsenal the title, in 1999 and 2003, handing the crown to Manchester United on both occasions – which must’ve felt bittersweet for the Yorkshire faithful.

“Elland Road was a really tough place to play,” Parlour tells talkSPORT.com. “Away games are tough anyway, but that was a seriously tough one.

“The crowd were really up for it – any London team going to Leeds struggled because they were up for a fight. The atmosphere at Elland Road was always superb.

That victory in 2003, which helped Leeds stay in the Premier League for one more season, inspired the start of Arsenal’s ‘Invincible’ era and ultimately signalled another end for the rivalry – and perhaps for good this time.

In the 16 years Leeds spent away from the top-flight, football has undergone irreversible alterations which makes a third coming of the rivalry almost impossible.

Parlour says: “Football has changed. It’s not as physical, you can’t get away with it now. Referees will send you straight off.

“In our era, you could get away with doing a couple of bad ones. All football was like that.

“I’d love for it to be like back in the day, with players steaming in. It would be better for the fans too, they loved it. It gave it an edge.”

With Leeds battling at the wrong end of the table and Arsenal looking to reassert themselves as top four contenders there is set to be plent of edge on Saturday evening, live on talkSPORT at 5:30pm.