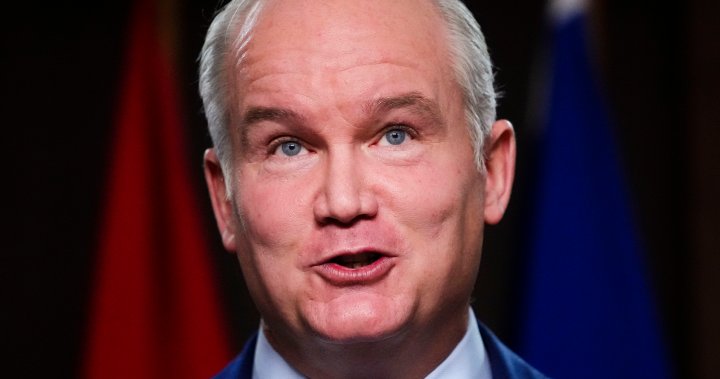 Conservative Leader Erin O’Toole emerged onto an Ottawa street Thursday after spending two days behind closed doors with his elected members, plotting out their priorities ahead of Parliament’s return.

One thing he still insists on keeping a mystery, however, is whether all 119 Conservative MPs will be allowed to enter on Monday, when a vaccine mandate kicks into effect for the House of Commons precinct.

“As I’ve said, you’ll see us in the House on Monday, and we’re looking forward to, as we always have, following the rules of the House of Commons, making sure we’re holding the government to account,” he said while speaking to reporters briefly.

That day, MPs must appear in person if they want to vote for Speaker, a position for which some Conservatives plan on running.

O’Toole remains the only federal party leader with seats in the House who has so far refused to confirm how many of his members are fully immunized against COVID-19.

As Opposition leader, he has previously said any MP he’s tapped to take on a critic role will be ready to appear there.

But on Thursday, when asked directly whether his entire Conservative team will be able to assume their seats, he said: “We’re going to be ready to go Monday. You’ll have to stay tuned.”

Several other MPs said they will wait and see what happens.

“I certainly know that I’m going to be in the House, and I’m hopeful that I’m joined by all my colleagues,” said Michael Barrett, deputy Opposition House leader.

Opposition House leader Gerard Deltell said earlier in the day that any of his Conservative colleagues who are not yet vaccinated against COVID-19 should roll up their sleeves.

Deltell said he believes the majority of Conservative MPs are immunized and hopes “that everybody will get vaccinated to sit in the House of Commons.”

“If they want to attend the House of Commons, which is their duty, they have to be vaccinated.”

An analysis by The Canadian Press shows at least 82 Conservatives, including O’Toole, say they have been double vaccinated.

At least four, including Ontario MP Leslyn Lewis, say they don’t disclose their vaccination status as a principle, and two others say they can’t be immunized for medical reasons. Lewis had previously questioned the efficacy of vaccinating children against COVID-19.

Saskatchewan backbench MP Cathay Wagantall, who is among those who haven’t publicly disclosed whether she’s fully vaccinated, teased after Thursday’s meeting to “come and see” whether she appears Monday.

MPs will be required to show proof of vaccination any time before they walk into the House of Commons starting on Monday. Many have done so at their swearing-in events and kiosks have been set up around the Commons for MPs to show their vaccination certificates.

O’Toole didn’t make vaccination a condition for candidacy in the recent federal election and says while he encourages all Canadians to get immunized, he respects the rights of individuals to make their own health choices and to keep that information private.

That position, which sets him apart from other party leaders in the House, has dogged him since the national vote. He has had to manage the issue of vaccine mandates within his caucus, as MPs have varying views on the policy’s importance.

In an attempt to strike a balance between caucus members who strongly oppose vaccine mandates and those who feel like the issue has become a distraction for Conservatives, O’Toole has said when the House resumes his caucus will raise a point of privilege with the Speaker over how the decision was made.

He’s taken issue with the fact the policy wasn’t set by MPs in the House of Commons, but was decided by an all-party parliamentary committee that governs administrative issues.

Joel Godin, a Quebec Tory MP who’s running for Speaker, said Thursday that he believes it’s important for all elected members to be able to vote.

In terms of priorities for the upcoming Parliament, O’Toole said he would focus on Canada’s relationship with the United States and trade, expressing concern with approaches taken by Prime Minister Justin Trudeau.

Barrett added Conservatives expect the government to address how it plans to deal with the flooding in British Columbia, and the impact inflation is having on Canadians’ cost of living.

O’Toole and his inner circle likely hope this can be their focus, too, after Sen. Denise Batters launched an online petition earlier in the week in hopes of forcing a referendum on his leadership in the next six months.

As a result, O’Toole kicked the party stalwart out of his caucus and warned other elected members they won’t be allowed to stay if they follow Batters’ lead.