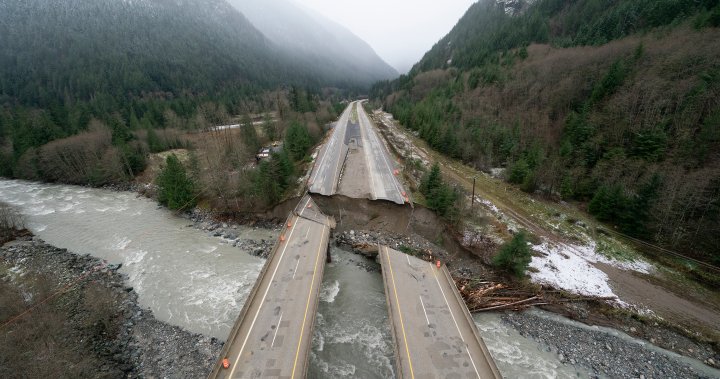 Defence Minister Anita Anand says the emergency response to catastrophic flooding in British Columbia over recent days is requiring an “all hands on deck” approach from across levels of government.

In a press conference on Thursday evening, Anand said additional aircraft deployed to the province over the past 24 hours are working on conducting “damage assessment” and that by the end of the day, there will be 120 Canadian Forces members on the ground in the hard-hit city of Abbotsford.

Thousands of others are on standby to deploy as needs are assessed and as officials determine which roads can be used to move supporting crews into the province.

“Over the next 30 days, and possibly longer if needed, the Canadian Armed Forces will be there to help the people of British Columbia through this crisis,” Anand said.

“This is an all-hands on deck effort, and I know that our Canadian Armed Forces will rise to the challenge as they always do.”

The Canadian Forces sent in an additional Hercules search-and-rescue aircraft as well as a Griffon and Cyclone helicopter that will be helping with the emergency response efforts.

“Activities will include providing assistance with evacuations, transport of emergency response personnel and equipment, and area reconnaissance,” said the military in a statement earlier in the day.

Members from the military’s disaster response unit based in Edmonton are also now in B.C. and will be doing “reconnaissance and coordination” ahead of future operations and resources coming in.

The exact number of members who will be deployed remains in flux, as do the specifics for where further military assets will go in the province once officials wrap up the work to identify key needs.

Examples of support that could come include transport assistance, logistics chain support to get resources from one point to another, and humanitarian aid, though details remain to be settled.

Three military helicopters and a search-and-rescue aircraft were sent into the Fraser Valley earlier in the week after hundreds of people were trapped on roads by landslides and cut off from help.

According to the Royal Canadian Air Force, the aircraft and crew were able to evacuate a total of 311 people as well as 27 animals to safety in the city of Agassiz.

The province is grappling with catastrophic damage from severe rainfall over the course of Sunday and Monday that has flooded whole communities and washed out vital transportation links connecting the cities of the province, and connecting Vancouver to the rest of the country.

The Coquihalla Highway is snapped in two from the flooding and could take weeks or even months to restore. The highway is a major route between the cities of B.C.’s Lower Mainland and those in the Interior, and was one of several key roads damaged in the floods.

4:47
How BC floods further strain supply chains and charitable donations

How BC floods further strain supply chains and charitable donations

Transport Minister Omar Alghabra said at the press conference on Thursday that all options are currently on the table as officials look for ways to restore supply chain access, including discussions on whether to divert any shipments to the Port of Prince Rupert.

The impact on the agricultural sector, he said, is “catastrophic.”

“The priority is restoring essential connectivity to supply local communities,” Alghabra added. “We’re also working to restore Canada’s trading connection through Vancouver to the rest of the world.”

He met with leaders from CN Rail, CP Rail, local ports and the trucking industry earlier in the day to discuss how best to respond, and called Canada’s supply chain “resilient.”

But the devastating impact of the floods, caused by severe rainfall on Sunday and Monday, has put increased focus on the worsening impacts of climate change on Canadian communities.

Just four months ago, many areas of B.C. faced terrifying wildfires and intense heat, and Natural Resources Minister Jonathan Wilkinson said adapting communities and infrastructure will have to be “front and centre” in the rebuilding efforts.

“We are going to have to adapt to these emerging realities, and we have to prevent it from getting worse,” he said on Thursday.

“In the medium term we will also have to think about how we build back smarter.”

The flooding in B.C. marks the 12th request for natural disaster assistance made to the Canadian Forces under Operation Lentus, their domestic emergency response mission, since the pandemic began.

Emergency Preparedness Minister Bill Blair described the recent disasters in the province as an “extraordinary trend line” of severe weather, adding the flooding this week is “without recent precedent.”

River levels are beginning to drop, he noted, but said the situation on the ground remains “critical.”

“There is a long period of recovery,” said Blair.

1:46
B.C. floods: ‘We’re not out of this by a long shot:’ Abbotsford mayor on floodwaters from Washington state’s Nooksack River

B.C. floods: ‘We’re not out of this by a long shot:’ Abbotsford mayor on floodwaters from Washington state’s Nooksack River