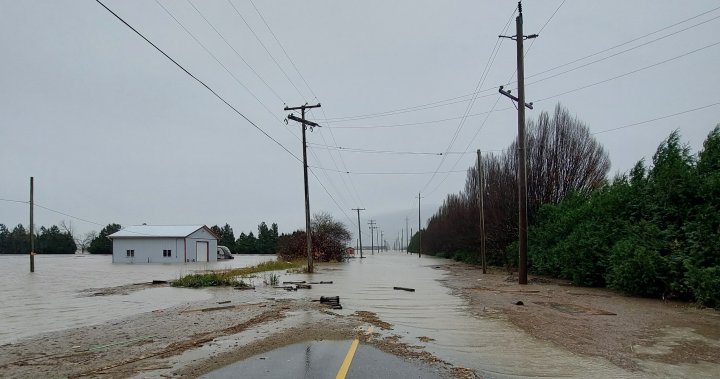 The battle against floodwaters in Abbotsford, B.C., entered a new phase Thursday, with the city announcing plans to build a levee that could force some residents from their homes.

The Sumas Prairie, a former lake bed, continues to be inundated with water from the flooding Nooksack River in the U.S., now exacerbated by two dike breaches to the southwest and the northeast near Highway 1, Mayor Henry Barun said.

Braun said plans were now underway to build a levee between Highway 1 and Sumas Mountain to shore up the larger breach, and that as many as 10 properties could be sacrificed.

The 2.5-kilometre levee is intended to prevent water from flowing from the Sumas River area across the freeway and into the low ground of the prairie, where it would refill the old lake.

Crews are racing against time, Braun said, with another 80 to 100 millimetres of rain forecast to begin Tuesday. Meanwhile, the city isn’t able to open a floodgate that could drain water into the Fraser River until water levels in the Fraser drop by at least 24 centimetres.

2:22
‘A lot of them have lost their investments’: B.C. flooding disaster deals heavy blow to farmers

‘A lot of them have lost their investments’: B.C. flooding disaster deals heavy blow to farmers

“The army is here, the military is here, we’re going to start working fix this breach. We have to do that; we have to stop this water,” Braun said.

Efforts in Abbotsford so far have focused on protecting the Barrowtown pump station, which is capable of pumping 2.2 million litres of water per second out of the prairie, and evacuating residents in the area.

More than 600 people have been evacuated, including another dozen overnight, but Abbotsford Police Chief Mike Serr said an estimated 40 holdouts remain with their property.

“You are putting our first responders, our rescue services, at risk by staying there, should we have to go in there when this gets much more complicated. So please, leave the area,” Serr said.

An estimated 2,000 out of 20,000 head of cattle in the agricultural area are believed to have died, Braun said.

He urged people to stay out of evacuation areas, and not to be fooled by water receding in some parts of the city, which were simply flowing to lower ground. Conditions were changing rapidly, and roads that appeared clear may not be safe, he added.

“We understand that people are desperate to get home to their property and their livestock. As with all emergencies it is vitally important for people to heed the advice of our emergency officials and to follow the … orders that are in place in order to ensure their safety and the safety of our first responders.”

Braun said he mentioned in conversations with Prime Minister Justin Trudeau, Premier John Horgan and other provincial ministers that the repair bill will be costly.

“They said the province will be there for us but when you start totalling this up, you’re going to get up to $1 billion, I predict.”

Braun said the community had a cost assessment of $400 million a few years ago to rebuild the same dikes that have now been breached.

Mayor Ken Popove of Chilliwack, which borders Abbotsford, said about 12 homes in the community of Yarrow have been evacuated due to flooding.

“I went for a little tour here (on Thursday) up into the mountainside of Chilliwack and there are washouts, there are slides. Staff told me there are about 14 slides that happened. Crews are out there to strategize on what is most important,” he said.

— with files from the Canadian Press