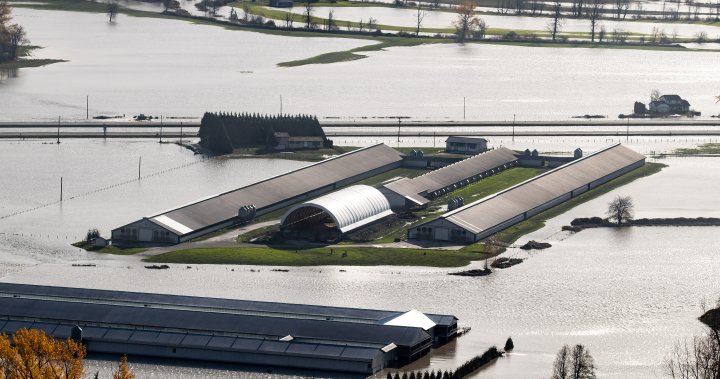 One week removed from torrential rainfall that led to disastrous flooding in British Columbia, the federal government laid out a clearer picture of the situation unfolding on the ground and the efforts to help during a Sunday evening press conference.

“We know that the overall situation remains serious, but there have been some improvements,” said Bill Blair, minister of emergency preparedness.

The flooding has displaced thousands, including up to 41 First Nations of which nine have issued evacuation orders, according to Blair. The damage is widespread, with highways, buildings and homes impacted, resulting in a significant response from the Canadian Armed Forces (CAF).

Given the scale of the flooding and water damage throughout the province, Blair did not mince words on recovery times, insisting that there is a long path ahead and without giving a specific timeline.

“It will take some time to fully recover from this disaster. It will take a great deal of coordination, collaboration and cooperation from all of us,” he said.

At the press conference, Defence Minister Anita Anand noted that at least 12 aircraft are presently in B.C., that over 500 troops have been deployed to the province and will be there by the end of the day, and that a sandbagging machine to help mitigate potential rising waters has been dispatched.

“We will continue to do whatever it takes to support British Columbia, and all Canadians are behind you at this time,” Anand said.

The newly appointed defence minister said that the current environmental disaster unfolding in B.C. is the 12th of its kind that the CAF has dealt with since the start of the pandemic.

So far, military members have assisted with evacuations of stranded motorists, conducted damage assessments, rescued livestock and are helping to repair the Sumas Dike. Anand noted that if things do get worse with a storm expected to bring more rain to parts of southern and northern parts of the province, the CAF is prepared to help.

“Should those requests evolve, we will continue to respond and step up accordingly,” she said.

Acting chief of defence staff, Gen. Wayne Eyre, said the province has not asked for more resources other than the current forces operating and to be deployed.

People living in parts of the province hit hard by the floods could be allowed to cross into the U.S. and back for essential purposes, according to Blair.

“Canadians will have to abide by all of the requirements of the United States to enter into their country, including producing the appropriate travel documents. But they are not required, at this time, crossing into the land border to have … a negative PCR test,” he said.

The federal government has already placed the order in council and said Canadian border service agents have been alerted to the change, as long as the travel is deemed essential, such as filling up for gas, getting medicine or buying groceries.

“To be very clear for people, activities such as visiting a family for a vacation, checking up on your cottage or attending a social event, would not be deemed to be essential under these circumstances,” Blair said.

The Canada Border Services Agency will be working with the U.S. Customs and Border Protection (CBP) to allow residents of disaster areas to access the U.S. for emergency reasons, on a case-by-case basis.

Canada’s current border regulations, which require vaccination to cross into the U.S. and a negative PCR test upon return, remain in place for all other Canadians.

U.S. CBP officers are aware of the extreme circumstances in Canada, but are not required to permit entry into the country if Canadians are not vaccinated, Blair said.

Supply chain will be operation soon

British Columbia has reopened two highway routes between the Lower Mainland and the rest of the province. All major routes between the populous urban centre and the interior were cut off by multiple landslides triggered by heavy rains last weekend.

It’s not just highways that were affected, though, as Canadian Pacific Railway said it is working around the clock to restore washed-out tracks. It said there was damage on the CP corridor between Vancouver and Kamloops and that it will take some time to get operations back fully.

“Based on feedback from rail operators, we are optimistic that rail corridors will open by midweek. This will be an important step in the recovery of our supply chain,” Minister of Transportation Omar Alghabra said.

He also added there is an interim order in place to prohibit non-essential vessel traffic in B.C. waters so emergency responders can have immediate and clear access.

“There remains a lot of work to be done under challenging conditions,” said Alghabra, noting the extent of the damage.

This natural disaster is not the first to hit the west coast, as months earlier, raging wildfires also resulted in evacuations and communities destroyed.

Carla Qualtrough, minister of employment, workforce development and disability inclusion of Canada, noted that as the global climate emergency gets worse, this will “not be the last time that extreme weather events have created serious weather emergencies.”

Qualtrough said British Columbians who have lost their jobs or are unable to work should register with Service Canada and will need a mailing address if they’re displaced and should be prepared to provide their normal residential address. She encouraged anyone applying to get set up on direct deposit in order to access payments easier.

“Many people have been displaced or could have lost their jobs due to the flooding and will need to apply for EI benefits. If you are in this situation, you can and should apply for EI online as soon as possible, even without a record of employment.”

For those who will not be returning home soon, Qualtrough said they should look to the Canada Post website to create alternate delivery arrangements.