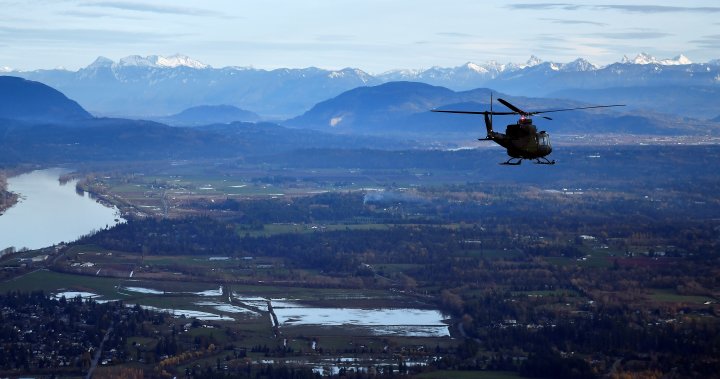 “That will connect us right through to the Alberta border and with the rest of Canada. This would be a very important and welcome development for goods movement for our country and we will update on the status of those track repairs,” Fleming said.

“Two-thirds of containers are moved by rail in this province. So that would be a significant addition to to the goods movement in the province.”

The CP Rail line has been non-operational through the area damaged by the storm that hit B.C. last week.

6:54
‘We will get through this together’: Deputy Premier Mike Farnworth on B.C. floods

‘We will get through this together’: Deputy Premier Mike Farnworth on B.C. floods

Trans Mountain is also expected to have its pipeline operational by the end of the week. Some of it is submerged, but crews are working overtime to restore the flow of gasoline, the company said over the weekend.

The company has more than 350 people working to restart the pipeline.

The pipeline remains closed following a voluntary, precautionary shutdown on Nov. 14 in anticipation of the impacts of heavy rainfall and extreme weather conditions.

Over the weekend, crews continued with efforts to fully evaluate the pipe in the affected areas, with teams being airlifted or hiking into areas where there is still no road access.

Ground inspections have been completed at many sites.

“If all planning and work continues to progress and no further issues with the pipeline are assessed, Trans Mountain is optimistic that we can restart the pipeline, in some capacity, by the end of the week,” the company said in a statement.

“Key to successful execution of the restart plan will be access for equipment, fair weather, and no new findings of concern.”

There is also hope fuel barges from the U.S. will arrive as British Columbians cope with gasoline rationing at the pumps.

There are barges in the water set to arrive in B.C. soon, the province said Monday. Alberta has also diverted some resources across the Rockies to support the ongoing shortages.

When asked on Monday about the current gas situation, Farnworth would not indicate what supply levels are at. He did note the province does not expect to run out of gas nor does it expect to amend the current order requiring gas to be rationed.

“We are confident that there’s enough gasoline, that people are doing the right thing,” Farnworth said.

“We’re confident that the measures that have been put in place are working and that people are doing the right thing.”

Transportation Minister Rob Fleming said more than 250 pieces of heavy equipment are working on highways and corridors around the province.

There are now two routes, Highway 3 and Highway 7, connecting the Lower Mainland with the rest of the province but they are open for essential travel only.

A new washout on Highway 3 has closed that route between Hope and Princeton at this time.

Highway 1 in the Lower Mainland, east of Chilliwack from Bridal Falls to Hope, also opened this weekend.

Fleming said there was some progress made on Highway 1 in the Abbotsford area. Water has receded between Highway 11 and Gale Road, which will allow for emergency traffic and farm vehicles to travel on that route.

Highway 1 through the canyon is now open between the Boothroyd First Nation and Hope, providing the communities of Yale, Supzzum and Boston Bar a direct link to the Lower Mainalnd, Fleming added.

It is for essential travel only.

The highway between Spences Bridge and Boston Bar remains closed. Temporary repairs are underway, Fleming said, and it is expected to be weeks before that area can open.

In addition, the Coquihalla Highway will remain closed for many weeks to establish temporary fixes and many months before it will reopen in full.

All routes on Vancouver Island are now open and the sinkhole on Highway 19 was repaired on the weekend.