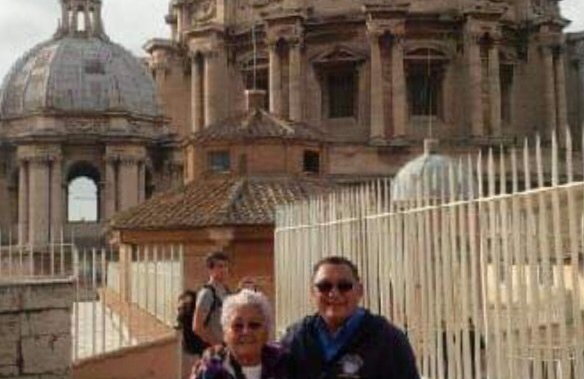 Warning: This story deals with disturbing subject matter that may upset and trigger some readers. Discretion is advised.

Seven years ago, Chief Harvey McLeod and his mother travelled far from home in British Columbia’s Upper Nicola Valley to the Vatican.

His mother prayed and watched for 10 days, he told Global News, and on a Wednesday during their visit, Pope Francis came out to address a crowd of onlookers.

That’s when McLeod — a survivor of Canada’s harrowing residential school system — looked up at the head of the Catholic Church on a balcony and said, “I forgive you.”

“I could feel that energy go through me,” he recalled. “And I know that was my ultimate forgiveness to the church so that I can take the next steps on my journey of finding my peace and happiness.”

It’s a story he would like to share with Pope Francis when he visits Canada — a step toward reconciliation announced by the Vatican earlier this week.

McLeod, now chief of the Upper Nicola Band, attended the Kamloops Indian Residential School between 1966 and 1968 — two years that brought him a lifetime of trauma and anguish, he said.

“In them two years my whole life changed from a person with light, happiness and confidence to a person that wasn’t himself anywhere — that detached from the world, that actually told himself, ‘I’m not going to stand in the light anymore.’”

He dimmed that light so he wouldn’t be seen, heard or singled out at the school, whose name is now tragically, inextricably linked to Le Estcwéy̓ — the 215 missing children whose unmarked burial sites were announced by Tk’emlúps te Secwépemc in May.

He strongly believes the Pope should apologize when he visits and said the acknowledgement would “feel good.” If it doesn’t happen, he added, he won’t let it stop him from finding his path to healing.

5:46
What Indigenous communities are hoping to hear from the Pope

What Indigenous communities are hoping to hear from the Pope

Across the country, Indigenous leaders, residential school survivors and their families are calling on the Holy See to apologize for the Catholic Church’s role in a system of assimilation that forcibly removed more than 150,000 First Nations, Métis and Inuit children from their families.

They were placed in the so-called ‘schools,’ where many were physically, sexually and spiritually abused by those charged with their care. Many were starved as part of scientific experiments on the effects of malnutrition.

Thousands died and the scars left of those who survived and their descendants, run deep.

If the Holy See does apologize for that intergenerational trauma and genocide, First Nations leaders in B.C. say it must be genuine and followed by commitments to act on reconciliation.

“Is it because there was a heartfelt need to look at the 500 years of what you can call or define as genocide? Or was it because of public pressure and the embarrassment of the Catholic Church?” asked Chief Byron Louis of the Okanagan Indian Band.

“The Catholic Church, I think we all need to understand, is not just some religious body — they are in fact, a level (of) government.”

The Vatican has an opportunity to decide “which side of history they want to fall on,” he added, and to set an example of human rights leadership that could resonate around the world.

5:37
Pope agrees to visit Canada to aid in reconciliation

Pope agrees to visit Canada to aid in reconciliation

Terry Teegee, regional chief of the B.C. Assembly of First Nations, welcomed a papal visit, calling it a “marker in our history” if the highest orders of the Catholic Church decide to be accountable.

Indigenous people in Canada are no stranger to gestures and apologies, he added, but acts of “substance” are harder to come by.

“We need the (residential school) records,” he said, echoing Tk’emlúps te Secwépemc Kúkpi7 Rosanne Casimir’s call for the church to hand over all documents pertaining to the system of assimilation.

“Further to that we need help with healing sources, the resources that were promised to us by the Catholic Church, and going forward perhaps that would signify their commitment towards reconciliation.”

Read more:
Canada needs to ‘lean in’: Message on truth and reconciliation from Kamloops, B.C.

The Assembly of First Nations is calling on the Pope to rescind the Doctrine of Discovery and the concept of ‘terra nullius’ — legal frameworks for early Christian explorers that gave them permission to conquer, displace and enslave the non-Christian, First Peoples of the land.

Both stemmed from a series of papal orders given in the 15 century.

The national organization also wants Pope Francis to return church-owned land to the First Nations on whose traditional territory it resides, and to invest substantive resources — well beyond the $30 million promised in September — to long-term healing initiatives.

The Pope must also issue a new papal order, it said, decreeing Indigenous peoples and their cultures are valuable and worthy of dignity and respect.

Such measures would be a real step forward, said Teegee and Louis. Kukpi7 Judy Wilson, secretary-treasurer of the Union of BC Indian Chiefs, agreed and welcomed the long-awaited visit.

Pope Francis, who effectively leads a country, she added, must also follow up on his trip to Canada by issuing orders to every single church he commands.

“They operated them, they ran them. They have all the records and the details,” she told Global News.

“We need to have the co-operation of the Pope himself, directly, to mandate and direct all those different churches, especially the ones holding (residential institution) records.”

Wilson’s family is still rebuilding from the impacts of residential schools, she said, including the loss of a “way of life.”

The Pope must understand the gravity of what he’s addressing on his tour, she explained, from the Indigenous names that were stolen from children who attended the schools, to those who were so devalued by priests and nuns that they weren’t given proper burials.

For many Indigenous peoples, McLeod said “physical presence” is an important concept — the ability “to hear and see” and experience a “sharing of energy.”

“The words that are going to be shared, whatever them words are, I can see and I can feel the energy that comes from the dialogue,” he said, ultimately pleased the Pope will step foot on Canadian soil.

“There is remorse, there is understanding about what was shared with the church on the suffering of individuals like myself.”

He’ll know whether Pope Francis is speaking from his heart, he added — after all, it won’t be the first time he’s seen the Pope address a crowd.