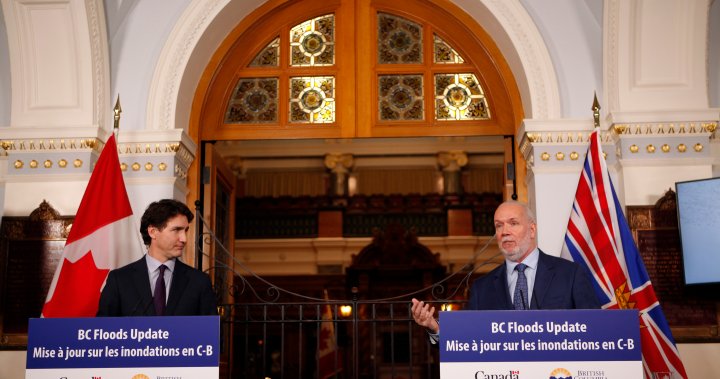 The British Columbia and federal governments are striking a joint committee of ministers to address disaster response and climate resilience, and have agreed to match Canadians’ donations to Red Cross flood relief.

Prime Minister Justin Trudeau made the announcements Friday evening, after meeting to discuss the deadly landslides and floods that have devastated southwest British Columbia.

“(It will) map out the way forward here in British Columbia and establish a model for how we’re going to move forward as a country facing extreme challenges like this,” Trudeau said.

Under the government donation matching program, the federal and provincial government will each contribute $1 for every dollar Canadians contribute to the Canadian Red Cross.

“I encourage British Columbians to give a dollar and there will be three dollars going towards helping people in distressed areas,” Horgan said.

The fallout of the Nov. 14 atmospheric river is shaping up to be the most expensive natural disaster in Canadian history, and while Horgan said it was “premature” to talk about dollar figures, he acknowledged “the dollars, the costs will start to mount.”

Trudeau pledged that the federal government would be there for B.C. with support in both the days and potentially years ahead.

Asked if that amounted to a blank cheque for disaster recovery, the prime minister said the federal government would commit to being a “full partner” in recovery.

“I have committed from the beginning that we will be here for whatever is needed,” he said.

Trudeau said the federal government has already deployed more than 500 troops to the province to help with the fallout of flooding, some of whom he met with on Friday, and who would be on the ground to help prepare for a series of storms expected to begin arriving Saturday.

The threat of future climate disasters featured prominently in both leaders’ remarks.

Horgan took pains to stress the scale — and unprecedented nature — of the damage in B.C., which for the first time in the province’s history cut all major road links to the Metro Vancouver area and pummeled parts of the interior that were hit by prior disasters this year.

2:25
Weather and travel warnings issued ahead of two more storms

Weather and travel warnings issued ahead of two more storms

“This followed droughts and wildfires and heat domes this past summer, and I think it’s important for Canadians to understand that Merritt was facing drought conditions in May, wildfire conditions in June and July and now flood conditions in the fall.”

Read more:
‘The time to prepare is now’: B.C. warns residents ahead of 2 more atmospheric rivers

Earlier Friday, Trudeau toured the flood zone in Abbotsford’s Sumas Prairie, where crews have been working around the clock to bolster dikes as the province faces a series of new storms expected to deliver significant amounts of rain.

The prime minister met with Abbotsford Mayor Henry Braun along with members of rescue operations on Friday afternoon at Abbotsford City Hall, where Trudeau was briefed on the city’s efforts against flooding.