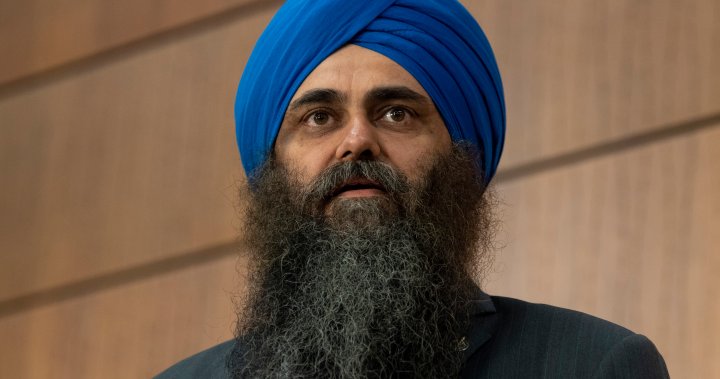 Uppal served as the minister of state for multiculturalism in Stephen Harper’s Conservative government when it entered the 2015 federal election campaign.

The party positioned itself as the defender of ‘Canadian values’ throughout the race by promising measures like establishing a tip line for so-called “barbaric cultural practices.”

Before the election, Harper spent his final months in office pushing culturally divisive policies. Those included a bill banning face coverings from being worn during citizenship ceremonies, a measure Uppal promoted.

The MP apologized for that stance this past June in the days after a Muslim family was killed by a driver in London, Ont. City police have described that attack as hate-motivated because they believe the victims were singled out for their faith.

“I want to be at a place where I could say, ‘Okay, you’re right, that happened, shouldn’t have happened, I should have been more vocal. And that would not happen under today’s Conservative Party,”’ Uppal told The Canadian Press in a recent interview.

Dispelling whatever concerns linger from the Conservatives’ past is among the challenges faced by both the party and Uppal himself. O’Toole recently tapped the Edmonton-area MP to become his chair of outreach, a new role created within his leadership team.

The emphasis on outreach follows the disappointment and frustration many Conservatives felt after failing to make inroads in the Greater Toronto Area — home to many immigrants and racialized Canadians — as during the Sept. 20 election. Party brass were also shocked when long-serving Conservative incumbents were defeated in ridings like Richmond, B.C., and Ontario’s Markham-Unionville, home to many voters of Chinese descent.

The losses in and around some of Canada’s largest cities, including Calgary, have been seen as a blow to O’Toole and his plan to grow the Conservative party in key areas needed to unseat the Liberals.

At the same time, Conservatives remember a time when current Alberta Premier Jason Kenney, Harper’s former immigration minister, helped deliver wins by courting the so-called ‘ethnic’ vote in major cities, where one of his strategies involved dashing between cultural events over weekends.

Balpreet Singh, a lawyer and spokesman for the World Sikh Organization in Canada, says what followed the Kenney era were years marked by relative silence, save for the efforts of some individuals like Alberta MP Garnett Genuis.

The organization did recently meet with O’Toole and Uppal, where they had what Singh says was a productive conversation where they committed to keep the lines of communication open.

Singh believes there’s room for the Conservatives to grow their support in Sikh-populated areas like Brampton, Ont., given how many community members like the party’s fiscal policies. But he says the promises from the 2015 campaign create unease.

“It was felt even though those were targeted at the Muslim community that the Conservatives were not hesitant to play the race card, the xenophobic card when it was felt to be to their advantage, and that’s unacceptable,” he said.

He says one of the issues he raised with O’Toole was his stance on Quebec’s Bill 21, a law prohibiting people like teachers and public servants from wearing religious symbols. Singh says the measure creates a “second class citizenship” for many in his community.

Singh said it was disheartening to see the Conservative leader say he would never challenge a law passed in Quebec. During their recent meeting, however, he says O’Toole indicated the issue was being discussed within the party.

The Conservatives also ran on an election platform which didn’t contain the words “racism” or “Islamophobia.”

Uppal, who worked alongside Kenney in his 2015 outreach efforts, says that hasn’t come up in conversations he’s had with people and believes O’Toole has been vocal that he condemns both.

Read more:
Canada election: Did the PPC split the Conservative vote? Maybe — but it’s not that simple

But Shalini Konanur, the executive director of the South Asian Legal Clinic of Ontario, says many of their clients face growing racism and so are interested in what federal parties have to say about keeping them safe.

“The prevailing view still right now is that they don’t have as much confidence in the Conservative Party’s stand,” she said.

“It’s shocking that the words ‘Islamophobia’ and ‘racism’ didn’t appear in the Conservative platform given the conversations we’re having now in Canada.”

Konanur says the clinic serves about 4,000 people per year and through advocacy and education work reaches between 7,000 to 12,000.

2:01
O’Toole claims he has support to remain Conservative leader as caucus meets

O’Toole claims he has support to remain Conservative leader as caucus meets – Oct 5, 2021

During the election, she says she heard from clients who thought O’Toole seemed genuine and liked him, but weren’t convinced that the party’s fiscal policies would help address unemployment levels in South Asian communities or fix issues with the immigration system.

Konanur says many have the impression the Liberals and NDP are more friendly than the Conservatives on immigration matters, but added that many clients see their social values better reflected by Conservatives.

Uppal says over the years he’s heard feedback from those in different racialized communities that they like the Tories position on taxation and supporting entrepreneurs, “and yet they say, ‘But we just don’t feel like we can connect with you.”’

Azad Kaushik, president of the National Alliance of Indo-Canadians, says he wants to see O’Toole steer the party back to the path set out by Harper when it comes to representing the country’s Indian diaspora.

Kaushik, who himself is a Conservative, says Harper’s hosting of Indian Prime Minister Narendra Modi in the lead up to the 2015 election was a “defining moment” for many of the country’s nearly 1.4 million Indo-Canadians.

“It is not the same after Prime Minister Harper,” he said.