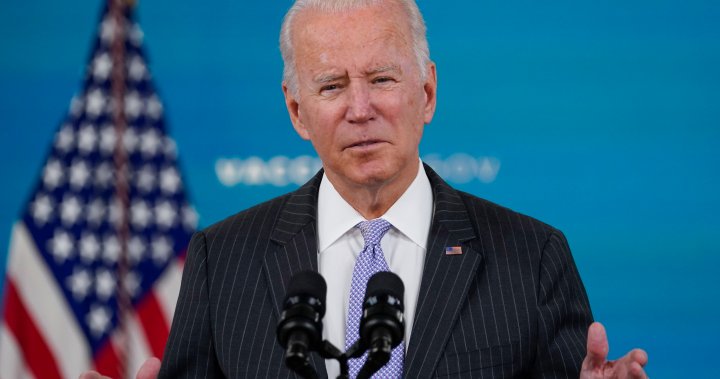 U.S. President Joe Biden said Wednesday the Democrats’ setbacks in Tuesday’s elections underscore that the party needs to “produce for the American people,” but he pushed back against the notion that the off-year election results were a repudiation of his presidency.

Biden suggested that his inability to get Congress to pass a $1 trillion infrastructure deal and a $1.75 trillion package of social and climate programs ahead of the voting didn’t make a difference.

In Virginia’s governor’s race, Democrat Terry McAuliffe lost to first-time Republican candidate Glenn Youngkin in a state that Biden won by 10 percentage points a year ago.

“I think we should have passed it before Election Day,“ Biden said. ”But I’m not sure that I would have been able to change” people’s minds in Republican-leaning areas either way.

He added that, “people are upset and uncertain about a lot of things” including the pandemic, the job market and the price of a gallon of gasoline.

Biden made the comments to reporters after delivering remarks to highlight what he said was a “great day” in the fight against coronavirus pandemic as children five to 11 became eligible to begin receiving the preventive vaccine.

It was a spot of good news for Biden who returned to Washington early Wednesday from Europe to the news that McAuliffe was narrowly defeated by Youngkin, a first-time candidate and former executive with the private equity firm Carlyle Group. And Democratic Gov. Phil Murphy was caught in an unexpectedly close race for reelection in New Jersey, a state Biden won by 16 percentage points.

2:04
Why Virginia’s close governor race is seen as a test for Biden

White House officials noted that while Virginia has trended Democratic in recent years, the sitting president’s party has lost the governor’s race in 11 of 12 elections there.

Before leaving Glasgow on Tuesday, Biden made the case that “the off-year is always unpredictable” and that he had seen no evidence that whether “my agenda passed or not is going to have any real impact on winning or losing” the two governor’s races.

Biden’s polling has fallen in recent weeks, something he blames on coronavirus fatigue among the American public. At the same time, rising prices and supply issues are impacting American households and the political mood.

But the president said those drags could be in the rearview mirror long before midterm elections a year from now if Democrats come together on his agenda.

“If I’m able to pass, sign into law, my Build Back Better initiative, I’m in a position where you’re going to see a lot of those things ameliorated quickly and swiftly,” Biden said.