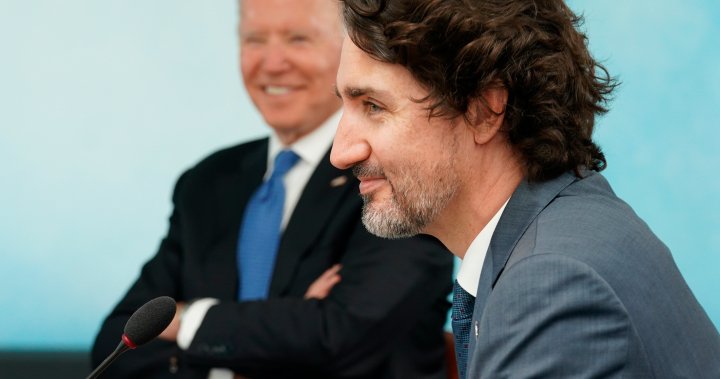 The Three Amigos are back on.

The in-person gathering will mark the first official North American Leaders’ Summit since 2016, when what had been an annual tradition went on hiatus during the presidency of Donald Trump.

It will be Trudeau’s first visit to the U.S. capital since Biden became president in January.

Read more:
Is it time for a new approach to the Canada-U.S. border? Experts explain

“This year, priorities include finishing the fight against COVID-19, getting the job done on vaccines, tackling the climate crisis, creating new middle-class jobs, building an economic recovery that works for everyone, and migration,” the Prime Minister’s Office said in a statement.

Canada in particular has a lot it wants to talk about.

High on that list will be a proposed tax credit for American-made electric vehicles, part of the Biden administration’s ambitious economic and social spending package known as the Build Back Better Act.

Critics say the credit, worth as much as US$12,500 to new-car buyers in the U.S., would give an unfair advantage to Big Three automakers and undermine the highly integrated auto manufacturing process that exists between the two countries.

3:17
What’s ahead for Canada-U.S. relations during Joe Biden’s presidency

That complaint dovetails with Canada’s broader concerns about Biden’s forceful Buy American rhetoric, which includes a more stringent vetting process for foreign contractors and suppliers looking to capitalize on a generational effort to overhaul U.S. infrastructure.

The two countries are also bracing for a showdown on long-standing continental irritants like softwood lumber and dairy imports. The U.S. complaint about Canada’s rules for importing American-made milk products is the first significant dispute since the advent of the U.S.-Canada-Mexico Agreement.

Canada is also anxious to play a vital strategic role in supplying critical minerals and rare-earth elements to make the batteries and electronic components so essential to the rapidly expanding North American electric vehicle market.

News of the meeting also comes on the heels of Monday’s relaxation of COVID-19 travel restrictions, which had prevented fully vaccinated Canadian visitors from driving across the Canada-U.S. border for non-essential purposes.

The White House version of Wednesday’s announcement described the agenda for the meeting as reaffirming trilateral “strong ties and integration” while “charting a new path” on COVID-19, competitiveness, climate change and migration.

“Strengthening our partnership is essential to our ability to build back better, to revitalize our leadership, and to respond to a widening range of regional and global challenges,” the White House statement said.

“With respect for each other’s sovereignty and in a true spirit of partnership, we affirm our unwavering vision that North America is the most competitive and dynamic region in the world.”