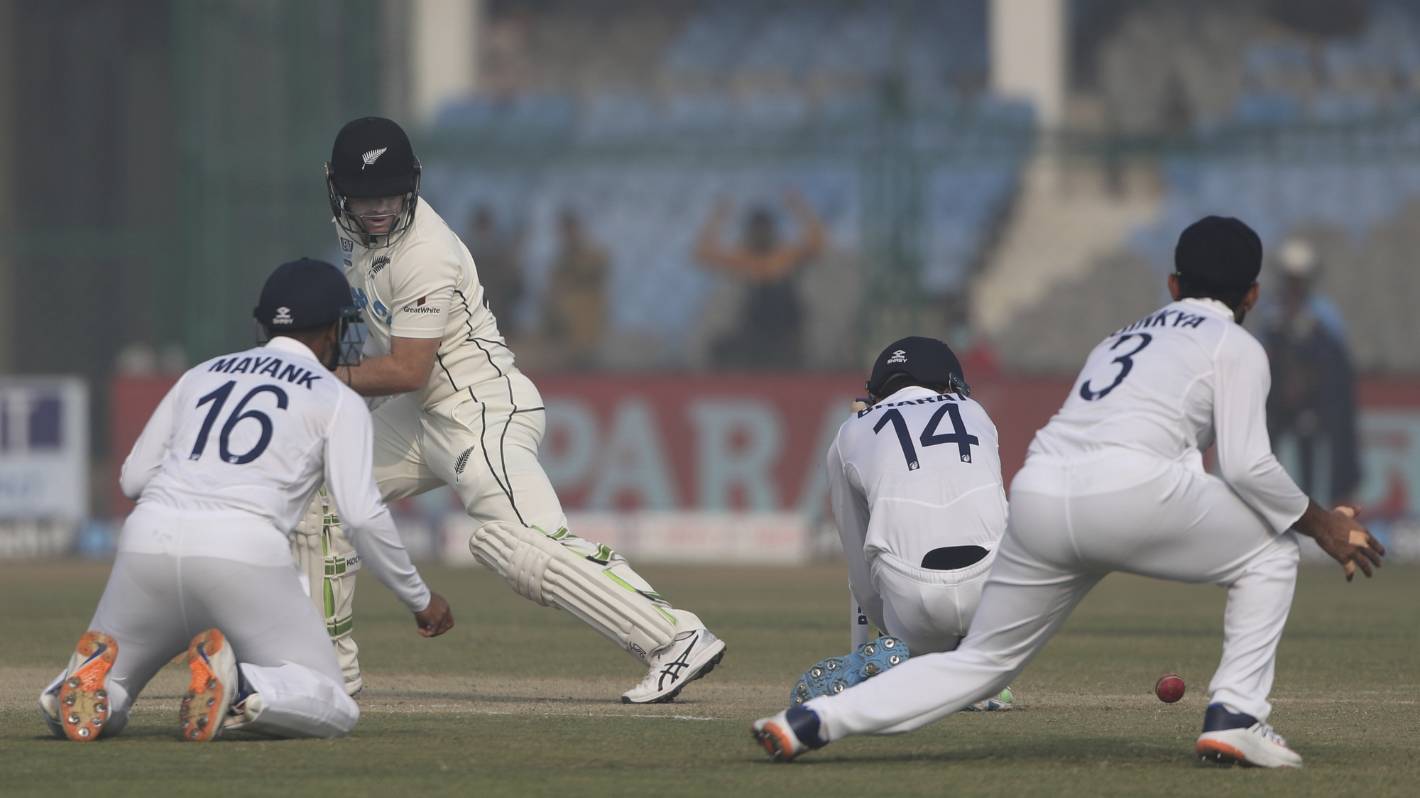 New Zealand were four balls away from enjoying lunch in a healthy situation on day three of the first test against India.

At 197-1 and with two of the country’s most prolific batters in their test history ensconced at the crease, the visitors would have been thinking about planning during the break how to ramp up the heat on their rivals in Kanpur.

But the least-heralded of India’s bowling line-up, Umesh Yadav, trapped Black Caps skipper Kane Williamson lbw with his best delivery of the test to trigger a decline which saw New Zealand lose 10 wickets for 145 runs to be bowled out for 296.

At stumps, India had increased their first innings lead of 49 runs to 63 with nine wickets in hand and two days left to play.

His half-century of victims arrived in just his ninth test, easily besting the previous mark of speedster Shane Bond, who got there in 12.

The day three woes for the tourists came after one of NZ’s best days in test matches in an unforgiving environment, restricting India to 345 batting first and then reaching stumps at 129-0.

After looking worthy of respect but not of fear during the first session, India’s spin trio of Ravichandran Ashwin, Axar Patel and Ravindra Jadeja suddenly appeared to be lobbing hand grenades with alarming regularity once Williamson went.

Tom Latham had been the rock of the innings but fell five runs short of his 12th test century when the opener had a rush of blood on 95 as the pressure mounted on him and the Black Caps.

Latham went down the pitch to left-arm spinner Patel and missed his drive, resulting in a stumping by KS Bharat – a substitute wicketkeeper for the start of day three, with initial glovesman Wriddhiman Saha suffering from a sore neck.

Tim Southee produced a bowling masterclass as New Zealand dismissed India for 345 in their first innings of the first test in Kanpur.

It was the first stumping in tests by a sub keeper since New Zealand’s Bevan Congdon produced one against Pakistan 56 years ago.

Latham had been eyeing his first century in 13 tests – his last ton prior was against England in Hamilton in November 2019 – and had batted for 282 balls prior to his lapse in judgment.

New Zealand had resumed their innings at 129-0 and the opening partnership got to 151 before Will Young – in for the injured Devon Conway – perished 11 short of a first test century.

Ross Taylor and Henry Nicholls went cheaply, Tom Blundell was defiant until scuttled by a delivery which skidded through and struck his stumps at shin height while Rachin Ravindra was undone by a beauty by Jadeja for 13 on his test debut.

New Zealand’s cautious approach and a desire to bat time which would reduce the period required to bat on day five unravelled simply due to a steady flow of wickets.

It meant none of the touring side’s batters ever established a sense of command once the composed Young and dogged Latham were removed.

Usually batting for 142.3 overs in India in a first innings reply after limiting the hosts to less than 350 would be a recipe for either a shot at victory or at least denying the home side another expected win.

But with a run-rate that just dribbled past two per over, New Zealand were left still facing a worrisome two remaining days in the first of their two tests.

“Each batsman’s gone out their with their own method of how they’re going to combat the conditions and also the Indian bowlers who are highly skilful in these conditions,” Young said.

“It is tricky to find that balance between defence, spending time in the middle and getting used to those conditions and also aggression, and how to take those calculated risks to keep the scoreboard ticking over.”

Patel took 5-62 off 34 overs off accurate spin while Ashwin finished with 3-82 off 42.3 overs and Young said batting conditions changed throughout the day.

“Right from day one there were visible cracks on the wicket.

“The cracks are opening up a little bit further as well as three days’ worth of bowlers’ footmarks and a bit of rough for the spinners to aim at. A little bit of uneven bounce too.

“I think a lot of our batsmen today were beaten by low bounce.”