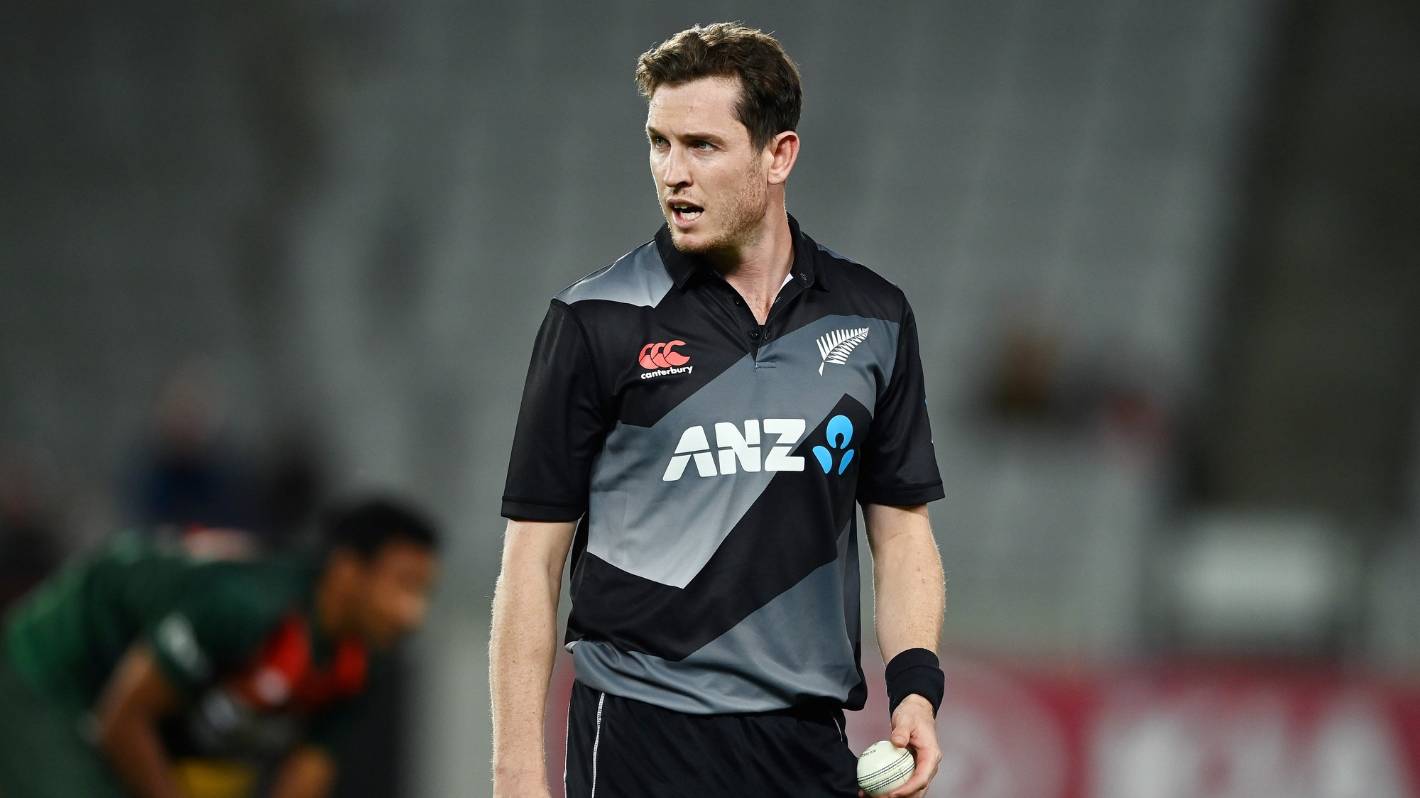 When Adam Milne hopped on the Black Caps bus for the hour-long drive to the venue of their opening match at the Twenty World Cup, he was expecting to play.

But when they got to the ground in Sharjah, he was told the team were still waiting for the ICC to approve him as an injury replacement for Lockie Ferguson, so he would have to sit and watch.

The Black Caps ultimately lost to Pakistan by five wickets, a result which left them facing a must-win match against India this weekend [first ball 3am Monday NZ time], and Milne wondering what might have been.

“I think if you’d looked at the way the pitch played throughout the course of the IPL, the faster guys that had been able to hit the wicket hard and create some uneven bounce had caused some problems for the batters,” he said, noting how Pakistan quick Haris Rauf had found joy.

“I think I would have been able to add something to the team, but it wasn’t meant to be, and I thought our guys bowled really well and unfortunately for us, they came out and batted really well towards that end part of the game.”

The ICC approved Milne as an injury replacement within an hour of the match ending. It then took more than two days for the governing body to explain why the change had not been approved before the match, even though scans had confirmed a calf tear for Ferguson earlier that day. A spokesperson said: “The [event technical committees] at ICC events do not approve changes on the day of the match”.

Having been ruled out of a World Cup himself due to injury, albeit at the semifinal stage of the one-day event on home soil in 2015, Milne knows how his team-mate must be feeling, and he said the bowling group were doing all they could to support him.

But now he’s eligible to play, he looms as a key figure as the Black Caps go in search of a win over India that would help them take a big step towards securing a place in the semifinals.

Milne’s initial omission from the Black Caps’ squad was one of the big talking points when it was named back in August, at a time when he was tearing it up for Birmingham Phoenix in The Hundred in England, continuing a rich vein of form that started over the summer with Sydney Thunder in Australia’s Big Bash League.

“I’d be lying if I said I wasn’t disappointed to make the 15 after having performed pretty well throughout the period I’d been playing, but with selection these things happen, and you’ve got to respect the decisions that the coaching staff and selectors have made,” he said.

Milne said he had been given two reasons as to why he was only a travelling reserve. First, his lack of consistent international cricket – just two matches since November 2018, both against Bangladesh at the end of last summer, after he returned from a 16-month layoff due to a persistent ankle injury in the BBL. Second, a desire to have a range of different types of bowlers in the mix.

Former Black Cap Shane Bond has played a big part in Milne’s revival after a long stretch where a series of injuries have kept him from performing at his peak. As coach of the Thunder, he handed Milne an opportunity in the BBL which eventually led to his international recall, and their work together has continued at the Mumbai Indians in the Indian Premier League, where Bond is the bowling coach.

He is with the Black Caps as an additional coach for the World Cup and when asked before the tournament if he was surprised by Milne’s omission, he swayed out of the way of the question as if it was a bouncer either one of them was bowling. “I’m just pleased I didn’t have to make that decision,” was how he put it. But he also spoke with real excitement about what he felt Milne still has to offer the Black Caps.

Former Black Cap Shane Bond has linked up with the team for the T20 World Cup in a role you might not expect.

“For him to be able to string together a year of performances is extremely exciting. I got him in at the Thunder, he got through the season and had a great season for us, he kicked on with Mumbai, was probably the best bowler of the tournament in The Hundred, and now he’s here at a World Cup with an eye to another World Cup in a year’s time [in Australia].

“You like to see good people have a bit of good luck and thankfully for him so far this year’s been great and I just hope in the next couple of years he can get that continuity from playing and be a leading performer for New Zealand.”

It was more than a decade ago that Milne made his Black Caps debut, as an 18-year-old in a T20 on Boxing Day in 2010, but it took four years after that for his form and fitness to allow him to nail down a place in the international white-ball teams.

He’s largely been absent from them for the past four years, playing just four matches since November 2017, but now he’s back and ready to show what he has to offer.

“I definitely feel like this has been the best period of cricket that I’ve had in a long, long time,” Milne said.

“I’d love to really make the most of it and continue to use this period to develop and perform really well at a higher level.

“I’m excited to hopefully make a difference with the ball in these games here and really prove that this period has been influential for me.”