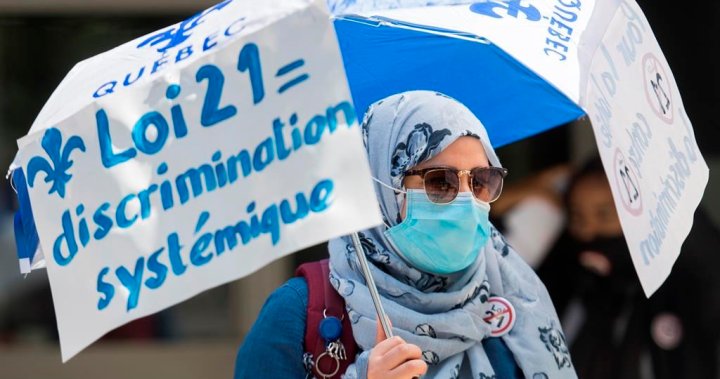 The Liberal government and Opposition Conservatives are facing calls from within to mount a more direct challenge to Quebec’s controversial secularism law after a teacher was removed from the classroom for wearing a hijab.

Federal parties and their MPs have spent the past week reacting to the law, known as Bill 21, which bans some public servants deemed to be in positions of authority — such as teachers, judges and police officers — from wearing religious symbols on the job.

The law was passed in 2019, but received renewed attention outside Quebec last week after news broke that Fatemeh Anvari, a Grade 3 teacher, was told she could no longer teach in a classroom because she wore a hijab.

One of the federal politicians calling for a more forceful condemnation of the law was Conservative MP Mark Strahl, a representative from British Columbia.

Conservative Leader Erin O’Toole has said that while he personally opposes the law, he believes it’s one that Quebecers alone must deal with and that a government led by him would not intervene in any court challenge to it.

But Strahl said he thinks “some issues transcend jurisdiction.”

The MP said he thinks Conservatives should re-examine their stance, which he said is unclear, and be prepared to challenge the law in court.

“We can’t let laws like that go unchallenged,” he told reporters before heading into the Tories’ national caucus meeting Wednesday, where he said the issue would be raised.

“It’s a position that’s shared by many, many of my colleagues.”

In a subsequent interview, she said she felt compelled as a Muslim to speak out and believes there has been a lack of leadership all around on the issue.

“We can’t be selective about human rights,” she said.

Despite the wish from some to adopt a tougher stand, O’Toole and other members of his caucus left the meeting saying nothing had changed.

On his way out, O’Toole, speaking in French, reiterated his personal opposition to the law and said Conservatives must speak as a team on important issues.

As for the Liberals, Prime Minister Justin Trudeau reiterated Wednesday that he has not ruled out federal intervention “at an appropriate time” in a court challenge to the law. For now though, he suggested it’s best to let Quebecers themselves lead that fight.

5:40
Trudeau comments on Quebec teacher reassigned due to her hijab as result of Bill 21

“And right now, a whole bunch of Quebecers are asking themselves questions about how in a free society someone could lose her job because of her religion.”

During Wednesday’s question period, Bloc Quebecois Leader Yves-Francois Blanchet challenged Trudeau to put Quebec’s public opinion on the matter to the test in a referendum. Polls suggest the majority of Quebecers support the law.

On Tuesday, NDP Leader Jagmeet Singh shifted from his earlier stance to say he would support Ottawa stepping into a court challenge.

Liberal MP Salma Zahid, who wears a hijab, issued a statement this week saying it was time for Ottawa to join the legal challenge against the law mounted by the National Council of Canadian Muslims and the Canadian Civil Liberties Association.

“This cannot be allowed to stand unchallenged,” she said.

“To date, the challenge has come from civil society. But as the party that brought the Charter of Rights and Freedoms to Canada, as a government that champions human rights around the world, we cannot allow the weight of this fight to be carried by civil society alone.”

Montreal Liberal MP Anthony Housefather alsosaid this week he wants a national debate on the use of and rules around the notwithstanding clause, which Quebec Premier Francois Legault pre-emptively invoked. The clause gives provincial legislatures and Parliament the ability to bring in legislation that overrides provisions in the Charter of Rights and Freedoms for five years.

It’s a conversation others have suggested is long overdue, four decades after the clause was created as part of constitutional talks. Housefather said the discussion should include whether the clause can be invoked without an actual court challenge of the law in question, as Legault did when Bill 21 was passed.

Newly elected Ottawa Liberal MP Jenna Sudds had similar sentiments in a statement she issued on the secularism law. She called it “a manifestation of intolerant and xenophobic sentiments” that may need federal intervention.

“Canadian governments at all levels have an unwavering commitment to the principles of freedom of religion and expression,” she said. “We cannot in good conscience stand idly by and allow this bill to go unchallenged, for what we permit, we promote.”

— With files from Mia Rabson