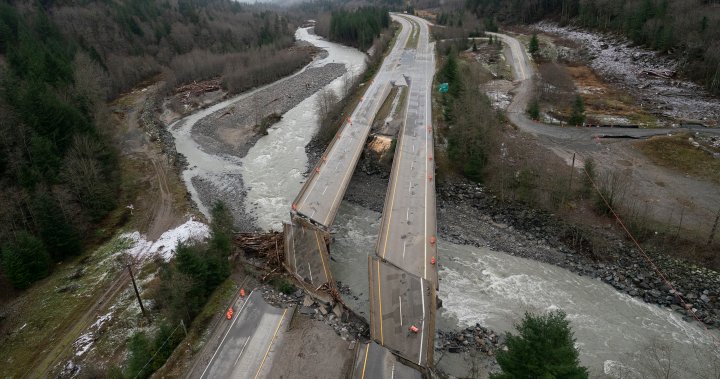 Climate change will cost the federal government in either prevention or in disaster response.

“We’re either going to take it on proactively or we’re going to take it on reactively, right?” said Wilkinson when asked how much and how quickly the government is willing to spend on adapting Canadian infrastructure to withstand the effects of severe forms of weather linked to climate change.

“We’re going to either spend money trying to clean up the disaster that’s happened here in British Columbia in the last little while, and what happened in Calgary in 2013, or we’re going to try to get ahead of it and make the investments with respect to ensuring that our infrastructure is resilient.”

READ MORE: Here’s how climate change will impact the region where you live

The full costs of the widespread flooding that has wrought havoc across British Columbia over the past week are still being tallied. But what’s clear is that the effects are catastrophic.

Canadian Forces members deployed last week as part of what federal Defence Minister Anita Anand called an “all hands on deck” emergency response, one she said will take weeks, or more. The bulk of that effort, so far, is based in Abbotsford, the Fraser Valley city among the hardest-hit in the flooding.

Abbotsford Mayor Henry Braun said the focus right now is on getting the situation under control.

But once that’s accomplished, he says attention will need to turn to preparing the city for more extreme weather in the future.

“I think those kinds of conversations need to be had,” he said, noting the cost of key projects like modernizing the protective dikes around the city sits at $400 million. And other communities like Hope and Coquitlam are facing the same problems.

“So we need to get a little more serious about this because if we don’t, this is going to happen again,” Braun said. “We need to bring those dikes into conformity with the situation, in the climate that we’re in. There is no doubt. Nobody has to convince me of climate change. I’ve lived here 68 years. The climate is different today than it was 68 years ago.”

5:26
‘The climate is different today than it was 68 years ago’: Abbotsford Mayor on aftermath of devastating floods

‘The climate is different today than it was 68 years ago’: Abbotsford Mayor on aftermath of devastating floods

The federal government has some programs targeting climate change and disaster preparedness, but they’re expected to come under pressure as the impacts of extreme weather become more frequent and demands for funding grow.

Programs like the Disaster Mitigation and Adaptation Fund as well as the Federal Adaptation Policy Framework aim to take infrastructure built decades ago and adapt them so they can withstand the increased stresses of the increasingly extreme weather linked to climate change.

But the Disaster Mitigation and Adaptation Fund is currently budgeted at $2 billion over 10 years, and the climate is rapidly changing in Canada.

Wilkinson said not every project can be done at once, but that the federal government is committed to working with provinces to identify the most pressing needs to update critical infrastructure.