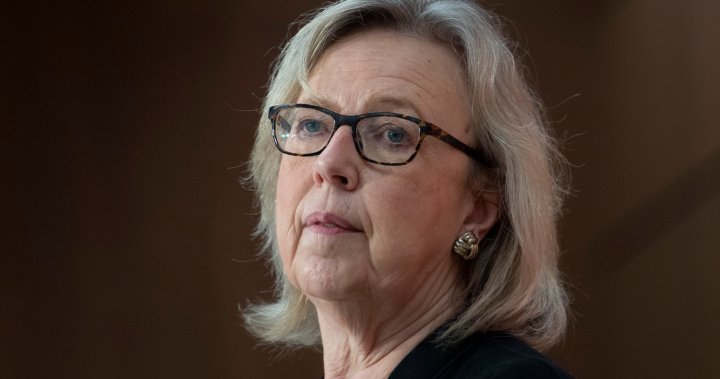 Canada is still falling short on the amount of drastic environmental action that is needed to limit global temperature increases amid a narrowing timeline, says former Green Party leader Elizabeth May.

In an interview with The West Block‘s Mercedes Stephenson, May reflected on the “laundry list” of pledges announced or re-announced by the federal government at the COP26 climate summit over the past two weeks, and warned the current commitments will not be enough.

“Canada’s commitments fall far short of what the science requires,” she said, pointing to the message from United Nations Secretary-General Antonio Guterres that a vital global goal is now “on life support.”

“It requires more cuts than we have now committed to doing as a nation, and the collectivity of nations aren’t there yet.”

The core goal in question is the pledge under the Paris Agreement to “limit global warming to well below 2, preferably to 1.5 degrees Celsius, compared to pre-industrial levels.”

The idea behind that is while many of the impacts of global warming global are now irreversible, the most damaging can still be prevented and mitigated by limiting the increase of the global average temperature to around 1.5 Celsius.

May’s comments came as the COP26 climate summit in Glasgow, Scotland, ended and as the world has borne the brunt of increasingly costly and devastating environmental disasters over the last several years in the form of wildfires, droughts, floods and severe weather events in many different forms.

“The impacts for the planet as a whole, if we go to two degrees, are quite substantially more dangerous than if we can hold to 1.5 degrees,” she said, adding Canada can still become an energy superpower. “But it’s going to be solar and it’s wind and it’s geothermal and it’s tidal.”

The world is in the midst of a reckoning over longstanding reliance on fossil fuels and the worsening impacts of climate change, which multiple international reports have warned is reaching a critical level.

Yet questions remain about how and if to phase out things like government subsidies to fossil fuel production as well as coal. Countries struggled last week to find consensus on the text of a new draft agreement expected from the summit, with much of the tension between richer and poorer countries.

Demand for action to limit the effects of climate change is growing, with the summit a frequent target for protests as activists and young people demanded quicker, stronger action to cut emissions.

There is also a growing swell of interest from the business and financial communities, where interest in sustainable investing products have skyrocketed over recent years to become a $35-trillion industry.

While there are still holdouts – primarily countries and regions with heavy economic dependence on fossil fuels – May said they need to either recognize the economic potential in the transition underway or get left behind as the world moves forward.

“For people in Alberta and Saskatchewan who don’t want to see the end of fossil fuels, it’s kind of like keeping on wishing, if you were in the horse and buggy business in the earlier part of the 1900s, that you could hang on to the jobs that everyone had in making wagon wheels and stabling horses and making buggy whips,” May said.

“There’s a technological revolution. The reality is that the investment money is moving to renewables. The excitement around a new green economy is unstoppable.”