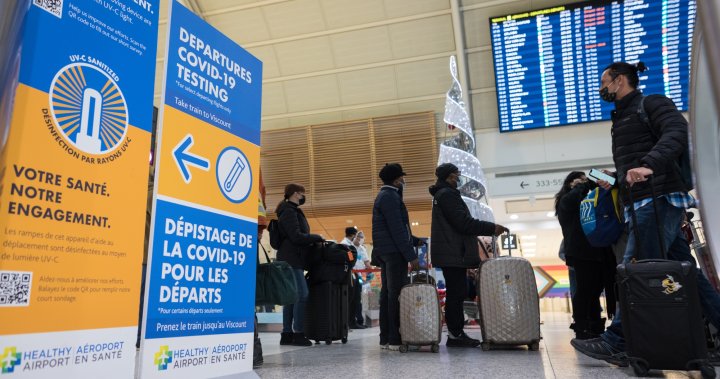 Canadian public health officials were eyeing the “high pandemic potential” of infected travellers arriving in Canada from dozens of countries seeing outbreaks of COVID-19 in the weeks just prior to the World Health Organization formally declaring a pandemic, according to newly released documents.

Global News filed an access to information request in spring 2020 requesting all records prepared by the Public Health Agency of Canada regarding “worst case scenarios” and “pandemic planning” during the one-month period prior to the WHO’s formal declaration on March 11, 2020.

In response, the agency released 138 pages of records showing that public health officials believed there was a “high pandemic potential” posed by infected travellers arriving from countries other than China.

“Risk of importation needs to be assessed because while air travel to China is now limited, spread to other countries mean that these countries are now a source of infected travellers coming to Canada,” officials from the Public Health Agency of Canada noted in a Feb. 27, 2020, memo.

In particular, officials said the airports in Vancouver, Toronto, Montreal and Calgary were the most likely arrival points for travellers from “high pandemic potential” countries into Canada.

Yet it wasn’t until March 16, 2020, that the federal government shut down the borders with a sweeping crackdown on foreign nationals from most other countries coming to Canada.

For nearly two months at that point, health officials had been insisting the risk to Canadians from the virus was “low.” That same memo noted that “larger Canadian cities may see hundreds to thousands of moderate to severe cases, requiring supportive emergency preparedness.”

“There may be 7,000-11,000 cases in the largest metropolitan areas in Canada, but there is considerable uncertainty around these estimates,” the memo noted.

“These figures are likely to be a worst-case scenario.”

The assessments from the early days offer a stark contrast against the current reality: a pandemic poised to enter its third year with a newly identified variant, Omicron, surging around the world.

In Toronto alone, there have been more than 182,000 confirmed cases of COVID-19 since the pandemic began, while Canada as a whole has now seen more than 1.8 million cases.

The country now stands on the other side of a grim milestone, with 30,000 Canadians dead from the virus, and provinces hustling to roll out massive numbers of COVID-19 booster vaccines in a frenzied bid to blunt the impact of the highly contagious Omicron variant.

Ontario Premier Doug Ford described the effort on Tuesday as a “wartime footing.”

Among the documents released to Global News were scenario planning that noted the potential for “societal disruption” to critical infrastructure, supply chain issues, and “widespread, mass civil unrest” if the virus began to spread widely in Canada.

Officials recommended looking at where Canada might be able to ramp up domestic production of things like personal protective equipment and critical resources — something the federal government is still working on, with recent deals to produce things like COVID-19 vaccines and medication domestically.

Just this week, Deputy Prime Minister Chrystia Freeland said during the fall fiscal update that the pressure still weighing on global supply chains make predicting what the coming year will look like a challenge.

“The ongoing pandemic also exacerbates the supply disruptions and labour shortages impacting a range of industries, with acute challenges extending until 2023.”

It’s a far stretch from the assessments in early 2020 that “the epidemic in China appears to be declining,” but one in apparent keeping with the pattern of curveballs being thrown by the virus.

6:47
The threat and severity level of Omicron

The threat and severity level of Omicron