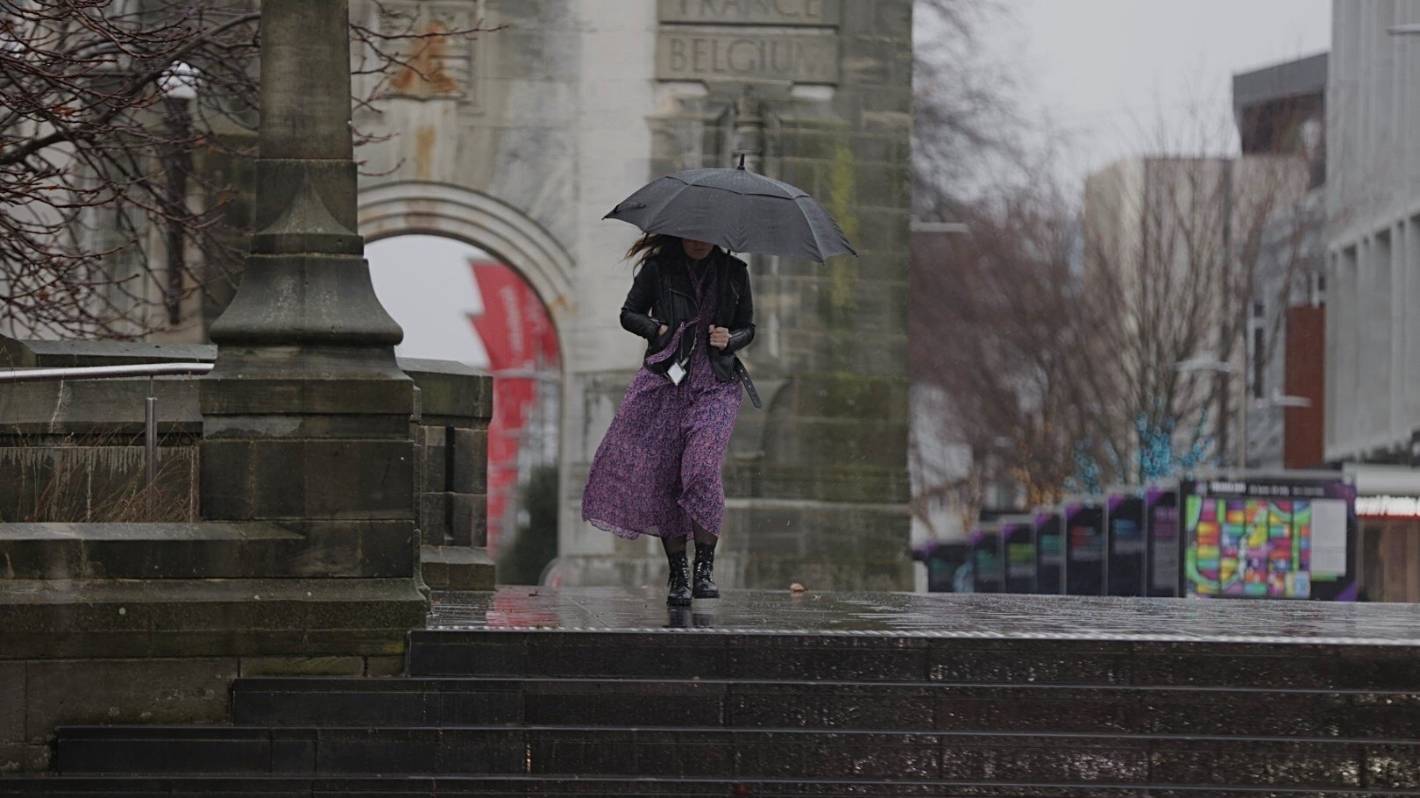 Rain and hail is on the cards this week for Christchurch. (File photo)

Christchurch could get up to four times its average December rainfall in just 29 hours this week, forcing the city council to prepare for “likely” flooding.

MetService has issued an orange level heavy rain warning for the Canterbury Plains north of Ashburton, including the foothills and Christchurch.

Up to 160 millimetres of rain could accumulate in the 29 hours from 1am on Wednesday, particularly north of Christchurch, MetService meteorologist Peter Little said.

The average rainfall for December was 42mm, meaning the city could get up to four times its usual monthly rain in just over a day, Little said.

“It’s going to be significant … flooding is likely.”

The heavy rain could cause streams and rivers to rise rapidly, he said.

Surface flooding in urban areas was likely, slips were possible, and driving conditions could be hazardous.

Rain was forecast to fall throughout Wednesday, and would start to ease on Thursday morning, but showers may persist through the day and into Friday as a new low weather front moved in.

“It’s been a very cloudy month for sure; not the start [to summer] the Garden City was hoping for.”

The rain was set to ease completely by the weekend.

Surface flooding in low-lying areas was likely, so the Christchurch City Council had prepared pumps on Maces Rd in Bromley, the Flockton area, and Ebbtide St in New Brighton, head of three waters and waste Helen Beaumont said.

Mostly settled weather returns to the country in time for the weekend.

Sumner and Southshore’s beach and estuary stormwater pipes were being managed, and extra staff would be on hand to address any problems that arose in those areas, she said.

“If you know there are leaves blocking sumps or drains by your property, it would help us if you could remove them, if it is safe to do so, and put them in your green wheelie bin.”

Any residents with flood issues could call the council’s call centre on 03 941 8999.

If there were widespread issues, priority would be given to responding to calls about flooding that was causing a safety issue or threatening people’s homes and businesses.

“If you need to be on the roads over the next few days, please drive slowly, particularly through any surface flooding, so that you don’t push water onto people’s properties,” Beaumont said.

“Also, try and avoid walking or biking through surface flooding as there is a chance it could be contaminated with wastewater.”

“Ensure you use your headlights, and give extra following distance to the car in front.

“If you’re in doubt as to whether water across the road is too deep to drive through – don’t do it.”

Canterbury has been no stranger to heavy rainfall and flooding this year.

In May, heavy downfalls from a ‘Code Red’ storm caused floodwaters to rise, cut power, and threatened lives and property in Canterbury.

It was only the second time a red warning had been issued by MetService in Canterbury for rain.

A state of local emergency was put in place for the entire Canterbury region.