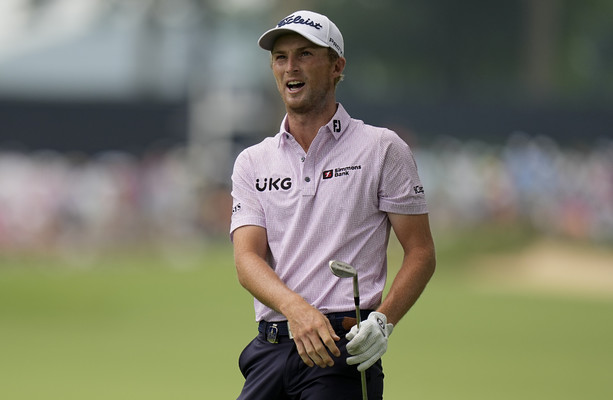 JUSTIN THOMAS BATTLED through blustery conditions to seize the early lead in Friday’s second round of the PGA Championship as 18-hole leader Rory McIlroy prepared to challenge daunting Southern Hills.

Ninth-ranked Thomas, the 2017 PGA champion, sank a nine-foot birdie putt on the ninth hole, his final hole of the day, to shoot a second consecutive three-under par 67 and swipe the outright lead in the clubhouse on six-under 134.

The 29-year-old American grinded through brisk winds Friday with gusts above 40 mph, opening and closing with birdies and adding two more on par-5 holes against a lone bogey.

Four-time major winner McIlroy fired a 65 on Thursday to seize a one-shot lead over Americans Will Zalatoris and Tom Hoge and all three were set for an afternoon start.

Back-nine starter Thomas rolled in a six-foot birdie putt at the 10th and followed at 13 by dropping his approach inside four feet of the cup and sinking the putt.

Thomas found a bunker and made bogey at the par-3 14th then made eight pars before sinking a 23-foot birdie putt at the par-5 fifth, setting the stage for his closing glory.

Winds were predicted to decrease as McIlroy, Tiger Woods and Jordan Spieth, trying to complete a career Grand Slam, took to the course.

Woods, in his second event of a comeback from severe leg injuries suffered in a February 2021 car crash, struggled to an opening 74 and said his surgically repaired right leg was hurting.

The 15-time major winner placed 47th in his return in April’s Masters, where he said just walking 72 holes was an achievement.

But with a projected cut at 4-over, the 46-year-old star was in jeopardy of not reaching the weekend at Southern Hills.

The world’s three top-ranked golfers were grouped in a major for the first time since the 2013 US Open but all were struggling over par after a 10th-tee start.

Get closer to the stories that matter with exclusive analysis, insight and debate in The42 Membership.

Top-ranked Masters champion Scottie Scheffler, who has won four of his past eight starts, was on 4-over with one hole to play.

Third-ranked US compatriot Collin Morikawa, the reigning British Open champion, was at 3-over.

Spain’s second-ranked Jon Rahm, the reigning US Open champion from Spain who could return to number one with a victory, was on 2-over.