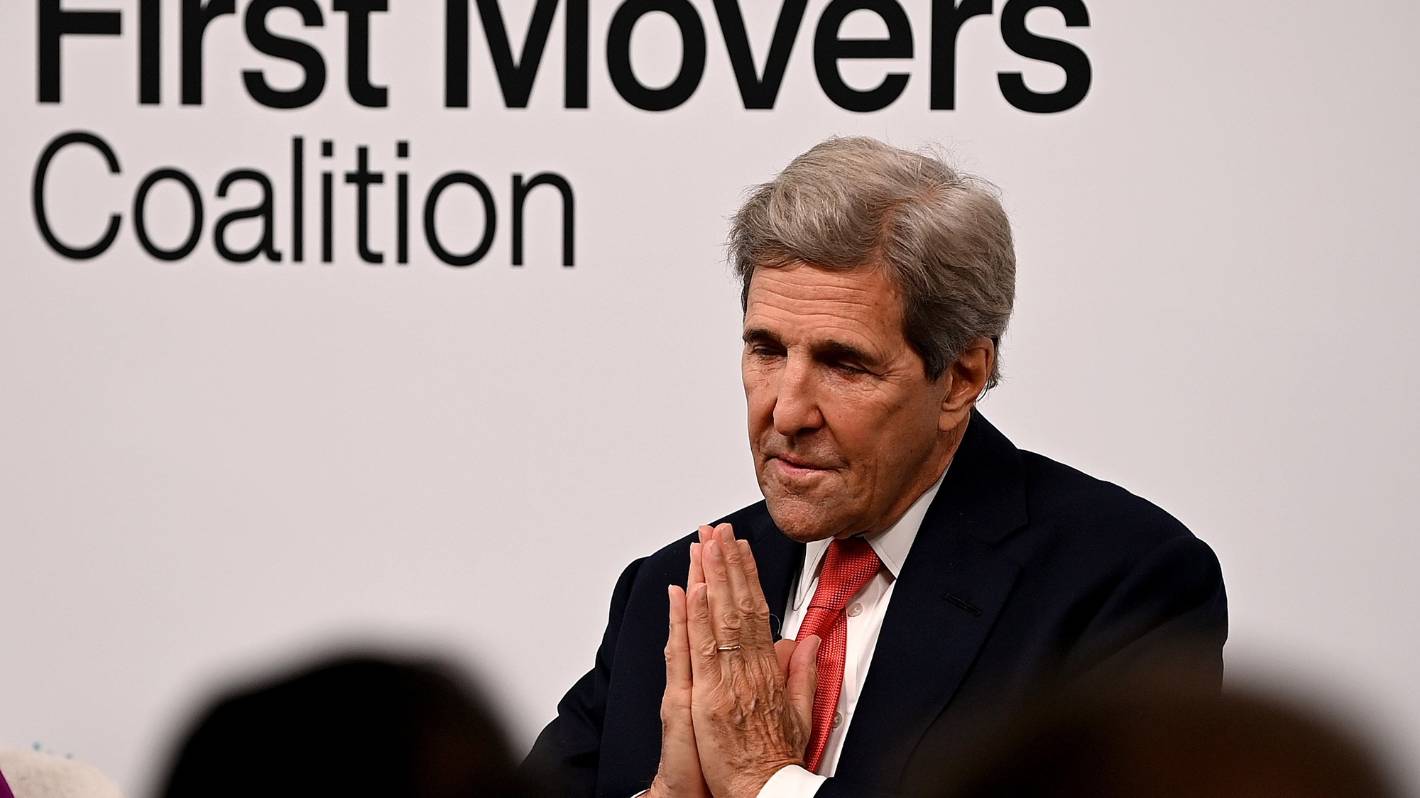 Countries have gathered to negotiate the final details of a global bid to keep the planet under 1.5-2C. Olivia Wannan reports from Glasgow.

The US has rounded up cement, aviation, shipping, steel and tech multinationals into a coalition pledging to lower their emissions, launched during the climate talks.

Globally, air travel, concrete, international freight and steel produce a lot of carbon dioxide, and are particularly tough to decarbonise. Some companies on the list – including shipping giant AP Moller-Maersk – have carbon footprints the size of small countries, so their lower-carbon efforts could have a significant impact.

But for a coalition claiming to be leaders, most of the goals are fairly unambitious, one expert said.

US special presidential envoy for climate John Kerry​ launched the coalition on Thursday, calling it “one of the most exciting things and important things” at the 26th Conference of the Parties (or COP) in Glasgow.

“There’s a dynamic setting in at this particular COP… this is different. There’s more energy, there’s more focus, more sense of urgency than I’ve seen at any of these meetings ever,” Kerry said.

“For the first time in a massive way, the private sector is at the table and, frankly, leading in the way that even some governments are not.”

The coalition has 32 founding members, though more firms can join. Metal makers – including Fortescue Metals Group and SSAB – are on the list, as are aviation firms Airbus and Boeing, alongside US airlines Delta and United. Tech giants Amazon and Apple are also in the group.

The companies have committed to at least one of four goals: to encourage zero-carbon shipping and aviation, to purchase lower-carbon steel and to switch to zero-emissions trucks.

Cement manufacturers Holcim, Cemex and Dalmia Cement are founding members, but the coalition has not set a goal for lower-emissions concrete – though the product may be subject to a second phase of commitments, to be announced next year.

As zero-carbon trucks start to hit the road, one coalition goal asks members to ensure all medium trucks they use or purchase are zero-carbon, and “at least” 30 per cent of large trucks, by 2030.

The aviation and shipping targets require “at least five per cent” zero-carbon fuel by 2030, while the goal is for at least 10 per cent of all steel consumed to be “near-zero”.

Ralph Sims​, a climate expert with Massey University, said it was positive to see businesses in these sectors acknowledging the vital need to reduce their carbon footprint.

While good progress had been made in recent years with lower-carbon planes, trucks, ships and steel, it was challenging to assess how easily the targets might be achieved, Sims said. The green tech would also need to be powered by renewable electricity to be truly zero carbon, he added.

It is easy for businesses to set targets, but much more challenging to meet those goals in practice, Sims said.

“They are largely hopeful that low-carbon technologies will be further developed and commercialised over the next few years in order for them to meet their emission-reduction goals,” he said. “However, there is no guarantee that these technologies will all prove to be successful or cost-effective, or that they will be widely deployed by all countries – especially many developing countries – over the next decade or two.”

Robert McLachlan​ , also of Massey, said those gains across all the high-emitting industries would be a very positive development for the climate. “But [it’s] probably not what the highest ambition parts of each sector should be aiming for.”

He noted the goals were weaker than some national initiatives, such as the UK’s plan to use 10 per cent sustainable aviation fuel by 2030.

“I guess with an initiative like this their goal is to have moderate targets, so as to get very large numbers of companies signing up,” he said.

Notably, the pledge wouldn’t prevent a member from increasing its carbon footprint, such as Maersk’s recent investment in air cargo – a more-polluting form of freight.

It also said nothing about efforts to reduce demand for carbon-intensive products, McLachlan noted.

“The industry see such regulation as a threat, so they want to be seen to be acting to avoid that.”

To stay up-to-date with COP26, and broader climate topics, the Forever Project newsletter will give you a weekly update. Sign up here.