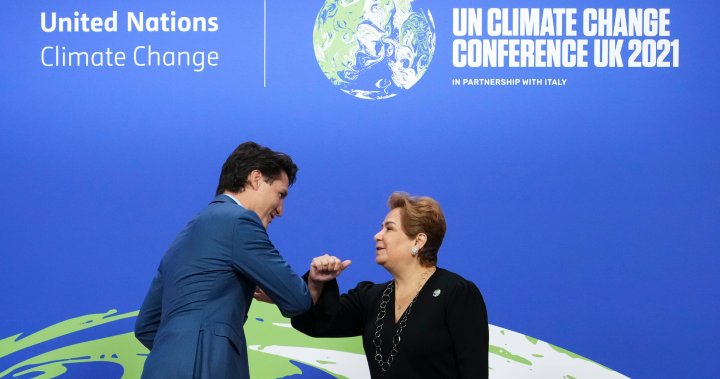 Prime Minister Justin Trudeau used his platform before world leaders gathered for the COP26 climate summit this week to urge the creation of global standards when it comes to pricing pollution.

Touting the domestic carbon price policy put in place by his Liberal government, Trudeau said the world can no longer act as if climate change does not exist because the devastation wrought on communities, like the town of Lytton, B.C., is only going to keep happening as the world heats up.

“Just as globally we’ve agreed to a minimum corporate tax, we must work together to ensure it’s no longer free to pollute anywhere around the world,” Trudeau said.

“That means establishing a shared minimum standard for pricing pollution.”

On Tuesday, he said there are “many different ways” of pricing pollution in different sectors, and that what is crucial is “to establish a principle of stringency and equity to make sure that everyone is pricing at the same level.”

Putting in a carbon price domestically proved to be a battle, fraught with both political and legal fights that culminated in multiple provinces — led by conservative premiers — challenging the policy before the Supreme Court of Canada, which ultimately upheld the pricing.

But putting one in place globally could be an even tougher fight given the differing approaches being taken in many jurisdictions.

Here’s what you need to know about the ideas being discussed right now.

What is a carbon price?

A carbon price is a concept most Canadians will be familiar with, given the country has had one in place since 2019 as a federal backstop for provinces without their own systems for pricing carbon emissions.

Under the program, every tonne of carbon emitted in a province where the federal carbon price applies costs an industrial emitter a set price. In Canada, the price will hit $170 per tonne in 2030, up from the $65 set to take effect in 2023. It is currently set at $40 per tonne, going up to $50 per tonne next year.

That translates into higher prices for things like gasoline, which the federal government tries to offset with a tax rebate for citizens. The essential thinking behind carbon pricing is that by making pollution more expensive, emitters will have an incentive to adopt lower-emission alternatives.

Canada’s program is still new and there has been debate about whether it is having the desired effect, though many economists say it will take time to see the results.

But could it be replicated globally at this point?

“The best you can hope for [at COP26] is that you actually get a deal on Article 6.”

What is Article 6, and why does it matter to these talks? It’s a section of the Paris Agreement, signed in 2015, that proposes the creation of an international carbon market where parties to that agreement can trade credits to hit their emissions reductions targets — and it appears to be picking up steam.

Under Article 6 of the Paris Agreement, the signatory parties agreed on mechanisms where they could cooperate voluntarily to work toward hitting their climate goals under the deal.

Those credits would count toward those targets, and could be basically traded among parties to the agreement on an international carbon marketplace that would be governed by the United Nations, via an as-yet-undetermined governance body.

McDermott said while the rough shape of that proposal has been laid out in the agreement, the details have not been hammered out. That is one area where leaders likely have a realistic shot at reaching a consensus during the COP26 meetings, he said.

Effectively, it would lay out the terms for a model similar to cap-and-trade in order to help countries meet their targets under that deal — and cap-and-trade has proved a popular model for roughly half the countries in the world that already have some form of pricing on pollution in place.

According to the United Nations, 40 national governments around the world have put in place some kind of carbon price in their jurisdiction, as well as another 25 “sub-national” governments.

Those cover roughly 15 per cent of global emissions.

Forty-six others are currently in the works.

It’s all part of the global push to get to net-zero carbon emissions by 2050, and prevent an average global temperature increase of more than 1.5 degrees Celsius as a result of climate change.

Why is this coming up now?

Although the proposals in Article 6 were laid out in 2015, the COP26 climate summit taking place this week in Glasgow, Scotland, is the first time the calls for an international standard for pricing carbon seem to be really breaking through in a big way.

The increased focus comes as the world is grappling with the devastating effects of climate change in a very real, very immediate, and very expensive way.

The question now appears to be on the best way to move forward for those countries that have already put some kind of pricing system in place, be it carbon price per tonne or a cap-and-trade system.

READ MORE: U.S. aims for global plan to cut down on methane emissions, seen as key in climate fight

The challenge facing calls for a global standard price is, as McDermott explained, the fact that countries that have put in place cap-and-trade systems already have prices on carbon that are set by the market, rather than by governments.

At the same time, businesses are looking for clarity on the rules of play, and for stability that they can plan longer-term forecasts and strategies around.

Why does this matter for businesses?

Martha Hall Findlay, chief sustainability officer at Suncor, said she is hopeful the conversations happening at COP26 will result in “practical and realistic direction towards solutions.”

“Those discussions are increasing,” she told Global News on Friday.

“My hope is that they end up becoming prominent at COP, that we move away from the extremes and that we actually focus on, OK, we have a really big challenge here — how do we reduce emissions and how do we get there together?”

In an open letter to world leaders this month, the secretary-general of the International Chamber of Commerce said those conversations are “critical” for businesses, and urged leaders to come to an agreement on how to turn the proposals under Article 6 for an international carbon market into action.

“A further failure to agree on a robust set of rules to implement Article 6 risks driving up the costs of climate action in the years to come,” wrote John W.H. Denton in the letter.

He added the business community recognizes Article 6 would not itself “lead to a global carbon price,” but that it could be a necessary first step to creating more transparent, multilateral pricing policies.

As the world works to navigate what is hopefully the beginning of the end of the COVID-19 pandemic, those pathways are more needed than ever, he added.

“From a real economy perspective, this is clearly vital to avoid the unintended consequences of unilateral climate policy measures— which increasingly risk triggering damaging climate-related trade frictions which could place a significant drag on any post-pandemic recovery.”

— with a file from Global News’ Heather Yourex-West.