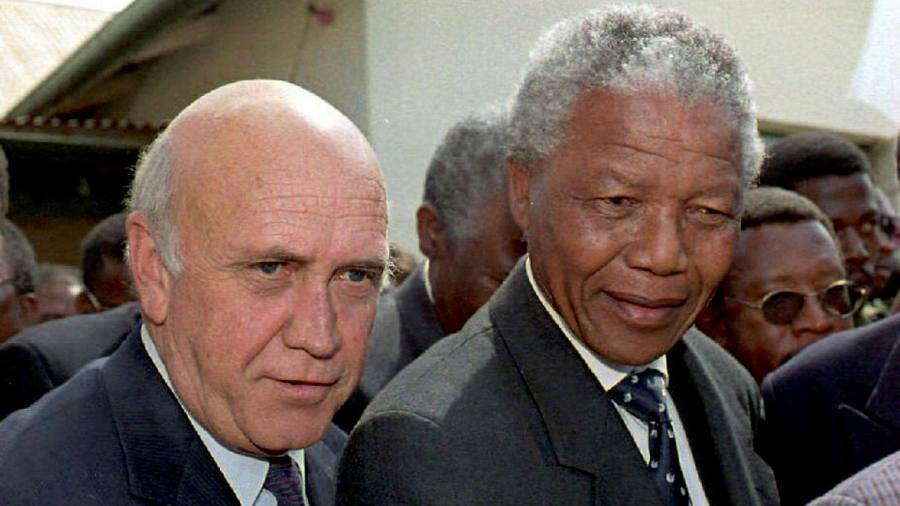 For South African Lukhanyo Calata, the son of a murdered activist, the death this month of apartheid’s last president FW de Klerk represents a missed opportunity. “He’s gone, and he’s gone with answers that we needed,” said Calata.

Calata’s father Fort was killed by an apartheid death squad and, 36 years on, no one has been brought to justice. Much of Calata’s anger is reserved for the ruling African National Congress over a deal to suspend prosecution of apartheid-era crimes that he said sold out “the blood of our fathers”.

His response to de Klerk’s death also reflects the huge public ambivalence over the man who shared the 1993 Nobel Peace Prize with Nelson Mandela for negotiating the transition to democracy but who as president was ultimately responsible for the brutality of the regime.

De Klerk’s foundation has said that he will be buried privately in a family-only ceremony on Sunday. President Cyril Ramaphosa, 30 years after he faced de Klerk in the talks to end apartheid, said that South Africa’s flag should be flown at half-mast before the funeral and that a state memorial service will be held later to remember him as former deputy president under Mandela.

Hours after de Klerk’s death, his foundation released a video on its website in which he apologised for “the pain and the hurt and the indignity and the damage” caused by apartheid.

Even during the transition to democracy, there was a view of de Klerk as “someone who talked good, but had an iron fist behind him,” and used repression as negotiations went on, said Dale McKinley, a researcher and author on South Africa’s transition.

And as disaffection with democracy has grown in recent years, that view is now “particularly widespread among the youth,” he added. “There is a very real desire to uncover the full history . . . part of the transition deal was not to pull skeletons out of the closet.”

More broadly, de Klerk’s legacy “is certainly contested,” he said. “The ANC, regardless of its own problems and factional battles, will still see FW de Klerk as someone who helped them and should be recognised,” and others will also see him as having avoided a bloodier end to apartheid, he said. Meanwhile, “a lot of Afrikaners thought he sold them out.”

The murder of Calata’s father and three other men is one of a litany of apartheid crimes that have never been prosecuted, even though a 1993 inquest found that security forces had killed the “Cradock Four”, and South Africa’s Truth and Reconciliation Commission (TRC) denied amnesty in 1999 to their killers. De Klerk attended apartheid state security council meetings that called for “removal” of the activists.

De Klerk’s foundation confirmed in July this year that there had been “an informal agreement between the ANC leadership and former operatives of the pre-1994 government” to suspend prosecutions.

This month, Ronald Lamola, South Africa’s justice minister, said a judge would preside over an inquiry into why prosecutions were delayed but he stopped short of confirming whether this inquiry would be public. “I feel betrayed, like many other South Africans,” said Yasmin Sooka, a human rights lawyer who served on the TRC, of the lack of justice.

At stake is the wider credibility of South Africa’s justice system after failures to prosecute the corruption under Zuma. “There is a culture of impunity in South Africa,” Calata said. “The thread of lack of accountability stems from our past — the apartheid past.”

Despite the video released after his death, many say de Klerk sought to muddy that past. In his last years he aired views that he expressed at the TRC — that apartheid was wrong, but had not been a crime against humanity. “Unless we have the courts confirm that apartheid is a crime against humanity, that the apartheid state was a criminal state, that set up death squads . . . the narrative will be in about 20 years that all of this didn’t happen,” Sooka said.

De Klerk also had cases to answer over a 1993 raid that he authorised in which five children were killed in their beds, and also over the involvement of his government in so-called “black on black” political violence as apartheid crumbled, Sooka said.

The Calatas might have justice yet. South Africa’s national prosecuting authority has told the family that it will say next month whether it will bring a prosecution in the case. If not, Calata will fight on.

“If it means I have to do this for another 20, 30 years, that is what I’m going to have to do,” he said. South Africa as a whole is “sitting with unresolved issues — unresolved pain,” he said. “For my family at least, there is a small ray [of hope] that this may come to an end soon.”