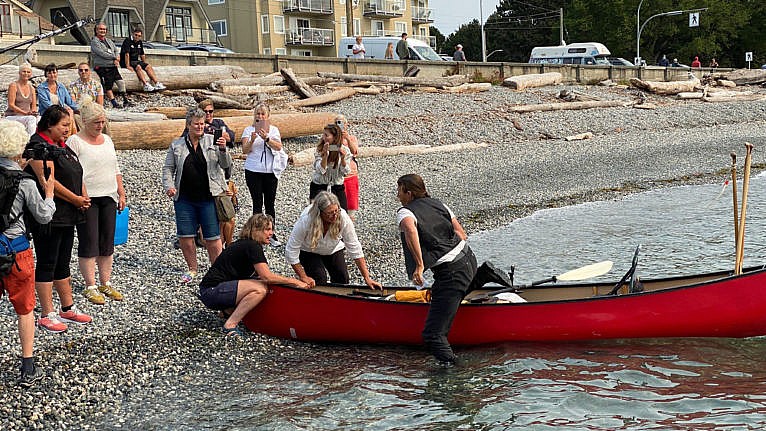 The B.C.-based filmmaker walked, hiked, paddled and snowshoed across Canada in what she calls an ‘ecological and reconciliation pilgrimage’

I was greeted on the shore by the daughters of the hereditary chief, and they walked the final mile with me. It’s pretty powerful that they chose to do that, and then sing a song and tell the crowd gathered there—which was mostly just friends and family—that we are one.

For the first six weeks after my return, I was still camping outside. After six years [out on the trail], that was normal life for me. It’s a very grounding experience when you’re alone in nature for weeks at a time. You have to accept that no one’s going to rescue you if things go sideways. It’s also a very humbling experience to be fragile out there, alone on the vast waters of Lake Superior, or deep in the woods on a fur-trader trail.

I called this journey an ecological and reconciliation pilgrimage. I wanted to honour the ancestors of this land. When you’re paddling on the waters, those are the most ancient trails in Canada. It’s a way that people have travelled on this land and water for thousands of years. The trail for me was like an umbilical cord that connected us all.

This story was told to Leila El Shennawy by Dianne Whelan, a B.C.-based filmmaker. Whelan began her trip in St. John’s, N.L., and paddled and hiked 27,000 km., ending in Victoria on the traditional territory of the Lək̓ʷəŋən People.