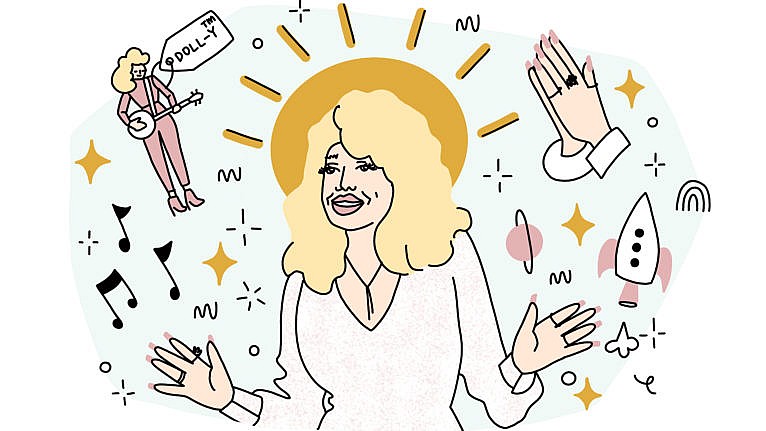 She donated a million dollars to fund vaccine research and wrote a thriller releasing spring 2022. Here are some (slightly far-fetched) ideas of what she may do next.

Evangelicals like to ask, “What would Jesus do?” But Dolly Parton fans have co-opted this saying, which we genuinely posit here: after donating $1 million to fund research for the Moderna vaccine and writing a thriller with author James Patterson, set for release in spring 2022, what will the 75-year-old country-pop icon do next? Here are some ideas.

As one of the most prolific songwriters in history—and the woman who famously turned Elvis down when he wanted to record I Will Always Love You because signing away her rights just wasn’t worth the dough—Parton’s fearsome business savvy (she only agreed to star in the 1980 flick 9 to 5 if she could write the theme music) would stop a streaming giant like Spotify in its tracks.

In 2009, Dolly released a record called Backwoods Barbie; the title track features her singing about how she dons “too much makeup, too much hair.” Which begs the question: why hasn’t Dolly launched a line of dolls in her image? It could be the dolls she never had as a child, like Banjo Dolly or Big-hair Dolly. Better yet: a Dollywood (Dolly’s amusement park) dollhouse.

A devoted Christian, Dolly would never stray from God. But launching her own string of megachurches? Kanye created Sunday Service, Justin Bieber attends Churchome. So what’s stopping Dolly? You’d better believe her fans would flock to get some life guidance from the Dolly Lama herself, especially if it comes in the form of cheeky one-liners—“the higher the hair, the closer to God,” she says.

Jeff Bezos can send William Shatner into the galaxy all he wants, but what the solar system needs is some rainbow-coloured stardust. Dolly’s space mission would be the most glam, powerful expedition known to womankind—and more appreciated by the masses, since she is universally beloved. Plus, she’d get to look down onto Earth and know that she has made it a better place, for sure.

This article appears in print in the January 2022 issue of Maclean’s magazine with the headline, “What would Dolly do?” Subscribe to the monthly print magazine here.