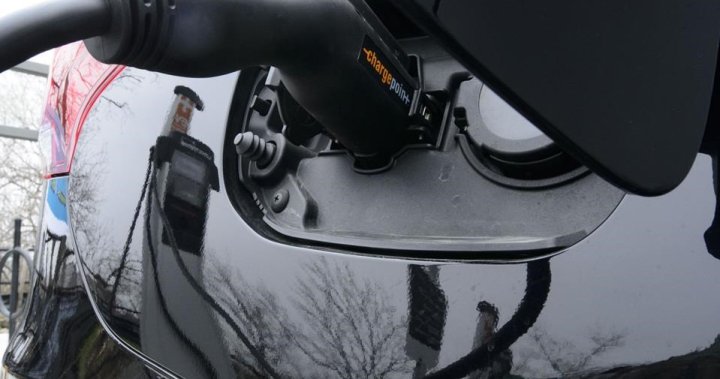 The federal government wants to overhaul the rebate program for electric vehicles so that it more closely aligns with the kinds of cars Canadians want to buy, says Transport Minister Omar Alghabra.

The Liberals promised in their election platform to spend another $1.5 billion over the next four years on the Incentives for Zero-Emission Vehicles (iZEV) program, which is one part of a big push to get more electric vehicles on the roads as Canada strives to reach net zero by 2050.

The current program has been immensely popular, but Alghabra is looking at improvements.

Right now, the program restricts the rebates to new vehicles with a maximum base price of $45,000, and a maximum price for models with upgraded features of $55,000.

That will leave out many of the new SUVs and pickup trucks that will start flooding the market next year, including the F-150 Lightning electric pickup that Ford says will start around $58,000.

“The vast majority of vehicles purchased today are SUVs and pickup trucks, and while (zero-emission vehicle) options are becoming available for these segments, many of these will be priced out of the current iZEV program,” Alghabra said in a written statement issued by his office.

It also omits used vehicles, for which there is an emerging market.

“That’s why our government is looking at how the program may be revised to better align with current consumer preferences,” Alghabra said.

In 2020, more than three in four new vehicles registered in Canada were pickup trucks and SUVs, while passenger cars made up only one in five.

But because of the models available, more than 60 per cent of new zero-emission vehicles registered in 2020 were passenger cars, and 35 per cent were SUVs and crossovers.

According to Plug’n Drive, an Ontario-based non-profit that promotes the use of electric vehicles, only four zero-emission SUV models are currently available in Canada. None of them has a price tag low enough to qualify for the rebate. There were no pickup trucks among them.

There are, however, more than 40 new electric-vehicle models expected in the next two or three years and most of them are pickups and SUVs.

Cara Clairman, president of Plug’n Drive, said the lack of real SUVs and pickups “is a real challenge.”

“It’s been a big deal up till now, because let’s face it, the early EVs were all pretty small and so that was a hard sell for Canadians,” Clairman said.

The first $300-million budget for the iZEV program was to last three years but was snapped up in under 20 months. Another $287 million was added a year ago, and only $48 million remains.

More than 121,000 vehicles were purchased with the rebates, which range from $2,500 for plug-in hybrids to $5,000 for battery only. Leased vehicles can see smaller rebates, depending on the length of the lease.

Clairman is among several electric-vehicle experts who say rebates to bring the cost of electric cars more in line with their gas-powered equivalents are a critical part of the puzzle.

The year after Premier Doug Ford cancelled Ontario’s rebate program in 2018, new electric-vehicle registrations plunged 41 per cent. Ontarians registered 38 per cent of all new electric vehicles in 2018. In 2019, that was 17 per cent.

Quebec and B.C. have both had rebates for several years, and together account for three in four electric vehicles sold in Canada. They are also the only two provinces with sales mandates that penalize automakers whose sales don’t include a minimum proportion of EVs.

Most of those programs also include help to install electric-vehicle chargers at home.

Rebates are not cheap, and some economists argue they’re one of the most expensive ways to cut greenhouse-gas emissions. A September 2020 paper led by Christopher Ragan, director of the Max Bell School of Public Policy at McGill University, concluded there are better and cheaper ways to encourage people to use electric vehicles.

Alghabra said the first 100,000 cars rebated under the iZEV program are reducing Canada’s greenhouse-gas emissions by about 352,000 tonnes a year, or about what 78,000 gas-powered cars produce on average over 12 months. Electric vehicles still produce some emissions, including when plug-in hybrids use their gas engines, and if the electricity used to charge comes from fossil fuels like coal or natural gas.

In his paper, Ragan said even in Quebec, where almost all electricity comes from zero-emissions hydroelectricity or wind power, the goal to get one million electric vehicles on the road by 2030 would cut emissions just 3.6 per cent.

That is a fraction of the target to cut total emissions by 37.5 per cent.

“In other words, EVs should not be considered as the primary or even an important way for Quebec to reduce its carbon footprint,” Ragan argued.

Switching gears: EVs important tool in tackling climate crisis – but is it feasible?

Wilf Steimle, president of the Electric Vehicle Society, said rebates are a short-term expense to overcome the sticker shock for some drivers until the prices become on par with gas-powered equivalents.

“It’s important to note to not lose sight of the fact that it is short term, that the price disparity is solving itself,” he said.

Analysts at BloombergNEF, which studies the energy transition, said in May they expect new electric vehicles to be cheaper, on average, than their gas-powered counterparts within five years.