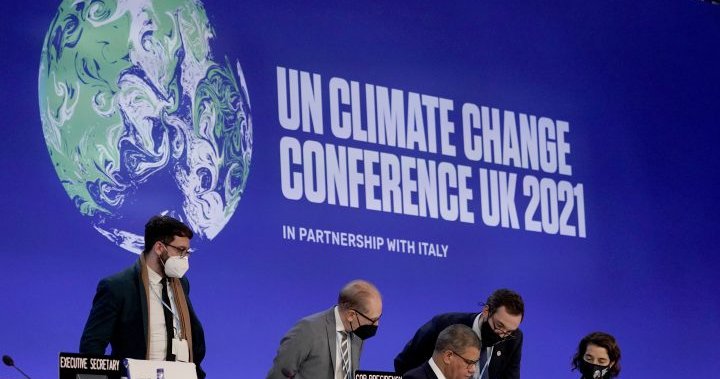 The delegates are trickling home and Glasgow’s streets are clearing of protesters.

Now, experts say, the real work begins of putting meat and bone to the pledges and commitments made by world leaders to keep global warming below catastrophic levels.

“The next couple years are going to be the most important, fastest-moving period of carbon reduction in Canadian history,” said Rick Smith, president of the Canadian Institute for Climate Choices.

With the UN-sponsored COP26 climate conference coming to an end, the federal government has to put some specifics behind promises. Business leaders are looking for details on everything from when the commitment to cap fossil fuel emissions will kick in to regulations on methane releases to tax credits for carbon storage.

“At the end of the day, it comes back to how you translate those targets into policy in Canada,” said John Dillon of the Business Council of Canada.

Dillon said he expects the climate discussion to broaden after Glasgow to include sectors such as construction, agriculture — even the military.

“The military produces a lot of GHG emissions.”

18:53
How Indigenous Guardians are on the frontlines of climate change

How Indigenous Guardians are on the frontlines of climate change

How quickly those promises are implemented and how deeply they’ll bite will be heated debating points.

“It takes time to adopt new technologies,” said Jack Mintz, President’s Fellow of the School of Public Policy at the University of Calgary.

“The big question for Canada is how fast do you drive down fossil fuel investment in order to encourage more investment in renewables, without creating a lot of harm and cost. I don’t think we have a very satisfactory answer.”

Read more:
The COP26 draft deal calls on countries to beef up climate promises. But is that enough?

Different countries will have to agree on which approaches they’ll take, Mintz said. Germany, for example, isn’t keen on hydrogen fuels made from natural gas while Canadian producers are.

But make no mistake, action is coming, said Mark Jaccard, an energy economist at Simon Fraser University. He said the recent federal election, in which a solid majority of Canadians voted for parties with strong climate policies, has given the federal Liberals a strong mandate to move.

“I know there is going to be huge discussions inside government of how you actually do that. (But) you should see stuff pretty quickly here.”

Shane Moffatt of Greenpeace agreed the federal Liberals have a green light to go green — but he warned climate activists will have to keep working to ensure actual policy emerges.

“One of the biggest outcomes from this COP is the sense of expectation and the momentum for more action now,” he said. “There is lots of public support but connecting that public support with real policy changes is sometimes elusive.”

Read more:
How to spot ‘greenwashing’ in your ESG investments

As well, large international questions remain. For example, some sort of global trading system for carbon offsets to allow a country to get credits for helping another country reduce emissions hasn’t gone much further than Prime Minister Justin Trudeau’s suggestion that it would be a good idea.

Dillon said many companies aren’t waiting for governments and are moving ahead on their own. But they can only do so much on their own.

“Some of the big, big investments will require more clarity from government,” he said.

“Glasgow lands right in the middle of this period of intense activity in Canada to finally put the pedal to the metal. It’s going to accelerate what was going on already.”