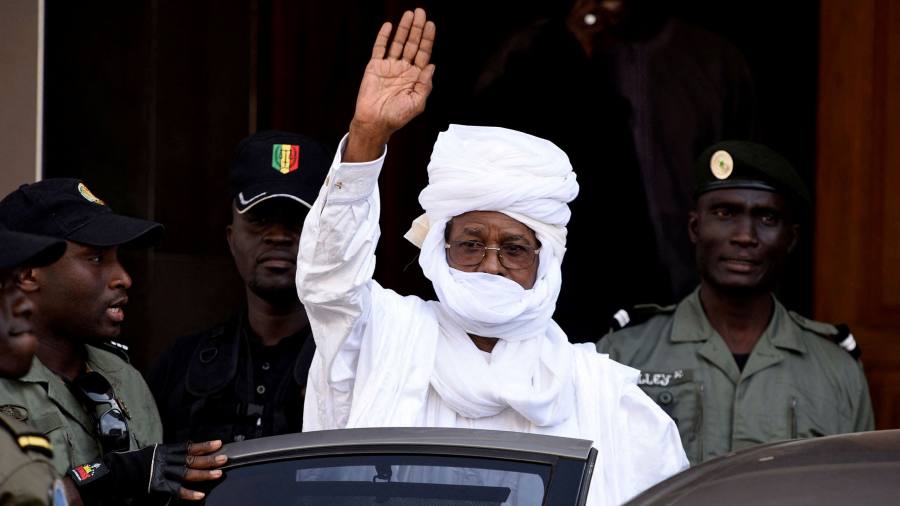 Hissène Habré, the former president of Chad who was the first African leader to be convicted of crimes against humanity by a court on the continent, has died aged 79 in Senegal after contracting Covid-19.

Habré, who was convicted of overseeing the killings of tens of thousands of people in the central African country, was jailed in 2016. Senegal’s justice ministry announced his death on Tuesday, according to local media.

“Hissène Habré will go down in history as one of the world’s most pitiless dictators, a man who slaughtered his own people, burnt down entire villages, sent women to serve as sexual slaves for his troops and built clandestine dungeons to inflict medieval torture on his enemies,” Reed Brody, a longtime Human Rights Watch official who for years worked with the former dictator’s victims, wrote on Twitter.

Habré seized power in 1982 and was backed by France and the US as a bulwark against Libya’s Muammer Gaddafi. His repressive rule was marked by gross human rights violations.

He was overthrown in 1990 by the former commander-in-chief of his armed forces, Idriss Déby Itno, and fled to Senegal.

A 1992 truth commission in Chad found that Habré was responsible for the deaths of roughly 40,000 people during his eight-year rule.

A Belgian judge issued a warrant for his arrest in 2005. The move prompted the African Union — long criticised for giving despotic members free rein — to intervene, arguing that Senegal should try Habré “on behalf of Africa”.

It took seven years before the trial began and only then after the International Court of Justice in The Hague ordered Senegal to either try Habré or extradite him to Belgium.

The election of Macky Sall in Senegal on the back of a popular movement against a predecessor dogged by corruption allegations helped spur the trial, which lasted 10 months.

The case was brought by 4,000 victims of his oppression, many of whom faced threats and intimidation to drop their campaign. Habré was finally convicted in 2016 and sentenced to life imprisonment.

Habré’s successor, Déby, was also brutal but became a critical partner for the west in the fight against jihadist groups in the region, including Boko Haram. Déby went on to be one of Africa’s longest-serving rulers before he was killed while visiting soldiers on the frontline of a battle in Chad against a rebel group in April this year.