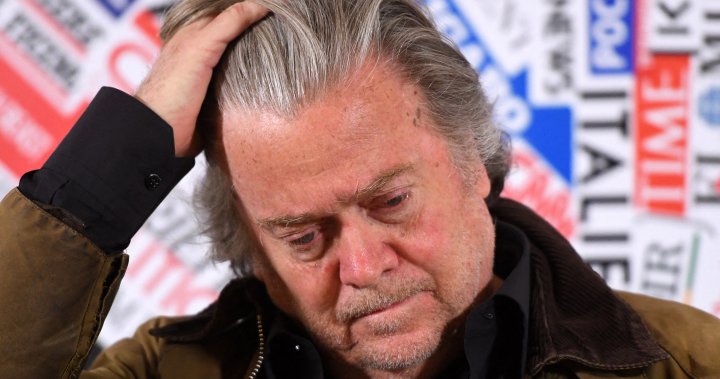 Former Trump aide Steve Bannon was indicted on Friday by a federal grand jury on charges of contempt of Congress.

Bannon, 67, faces two counts of contempt — one for his refusal to provide documents related to the Jan. 6 riots at the U.S. Capitol to the congressional investigators, and the other for not agreeing to sit for a deposition, the Department of Justice said in a press release.

Each count could mean between 30 days to one year behind bars, and a maximum fine of $1,000, according to the Justice Department.

The subpoena issued to Bannon on Sept. 23, 2021, was for him to appear before the House of Representative’s select committee and produce documents of interest.

Bannon was believed to have information relevant to the events of Jan. 6, according to the select committee’s subpoena. The committee has said that Bannon has made public statements suggesting he knew ahead of time that “extreme events” would take place on Jan. 6.

Bannon said on a Jan. 5 podcast that “all hell is going to break loose tomorrow.”

Bannon served as chief strategist and counselor to former U.S. President Donald Trump up to 2017 and has been a private citizen since. He also played a senior role in the 2016 election of Trump and previously headed Breitbart News, a right-wing platform.

The indictment comes as a second witness, former White House Chief of Staff Mark Meadows, resisted a similar subpoena from the committee on Friday. The chairman of the panel, Mississippi Rep. Bennie Thompson, said he will be recommending contempt charges against Meadows next week.

If Meadows is found in contempt by the full House, the Justice Department could pursue charges against him as well.

Bannon’s indictment shows the Justice Department’s “steadfast commitment” to making sure that the body adheres to the rule of law, Attorney General Merrick Garland said.

This is not the first legal peril Bannon has faced. In August of last year, he was pulled from a luxury yacht and booked on allegations that he, along with three of his associates, ripped off donors trying to fund a southern border wall. He was pardoned by Trump during the final hours of his presidency.


— With files from The Associated Press, Reuters and Eric Stober