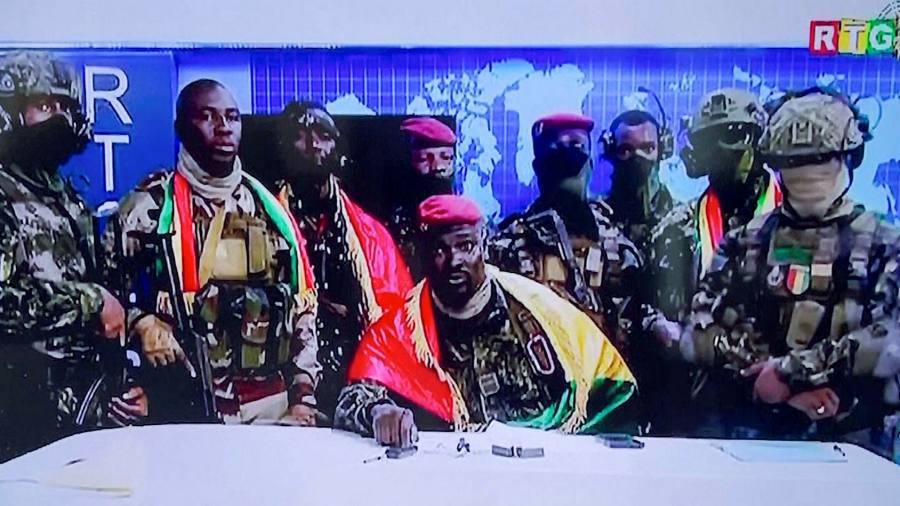 The military junta that overthrew Guinea’s president has said it will form a unity government and urged mining companies operating in the mineral-rich west African country to continue operations as it sought to tighten its grip on power.

Colonel Mamady Doumbouya, the leader of the junta that is calling itself the National Committee for Reorientation and Development, told members of the ousted administration in a meeting in the capital Conakry that its planned unity government “will be set up to lead the transition” to civilian rule. He said that ports in the world’s second-biggest bauxite producer would remain open for export and a curfew in mining areas had been lifted “to ensure continuity of production”.

Guinea supplies a quarter of the world’s bauxite, mostly to China and Russia as the main ingredient in aluminium. Its price hit the highest level in a decade on Monday, reaching $2,776 per tonne on the London Metal Exchange.

International powers have condemned the coup. Doumbouya had earlier said he was holding ex-president Alpha Condé in a “safe place”, and ordered that Guinea’s ministers be replaced, according to a statement read on state television. Military commanders will take over as governors of the country’s provinces.

“We’re here to allow Guineans to live together and for all of us to enjoy the benefits of this country, that’s our objective. We’re not here to play games. We’re here to learn from the mistakes that have been made — the whole army is here . . . to help build this country,” Doumbouya, a former French legionnaire, told France 24, the French TV station. “We have all the security forces behind us to once and for all end the misery of the Guinean people.”

The African Union, UN and regional bloc Ecowas all issued statements condemning the coup. “Ecowas reaffirms its disapproval of any unconstitutional political change,” the bloc said. The US said in a statement that the coup “could limit the ability of the United States and Guinea’s other international partners to support the country”.

Doumbouya and members of an elite national army unit overthrew Condé on Sunday after a brief firefight near the presidential palace. Videos of the 83-year-old president being held by soldiers quickly circulated online, even as the defence ministry claimed that the incursion had been repelled. There were reports of celebration in the streets of Conakry after Condé’s ousting.

Guinea has some of the world’s best bauxite and iron ore deposits but its 13m people remain largely impoverished. It generates most of its revenues from mining exports, which have helped power the economy to more than 6 per cent growth annually over the past five years, following a severe drop after the west African Ebola outbreak that killed 2,500 Guineans.

Russia’s Rusal and US company Alcoa are big investors in the bauxite sector, while Anglo-Australian mining group Rio Tinto, Chinalco and the China-backed consortium SMB Winning own parts of Simandou, one of the world’s most important iron ore deposits, in south-eastern Guinea.

“This situation may seriously shake up the aluminium market as 20 per cent of global aluminium production uses bauxite from this small and very poor country,” Oleg Deripaska, Rusal’s founder and previously main shareholder, wrote in his Telegram channel late Sunday.

The coup comes less than a year after Condé, a former democratic activist, won a contentious third term after pushing through a constitutional change that allowed him to run. The move sparked widespread street protests that the government responded to with a violent crackdown.

Sunday’s events make Guinea the third country in the region to suffer a coup over the past year amid fears of democratic erosion across west and central Africa.

The coup is part of “a pattern fast emerging in the region . . . linked to elections . . . and a ruling class who rules without the interest of her citizens at heart,” said Idayat Hassan, head of the Abuja-based Centre for Democracy and Development. “It is telling that citizens [would] support a coup d’état.”

Mali is now run by a military junta that overthrew the democratically elected president last year, while Chad has a ruling military council that swiftly installed 37-year-old Major General Mahamat Idriss Déby as president following the death of his father, Idriss Déby, in April.