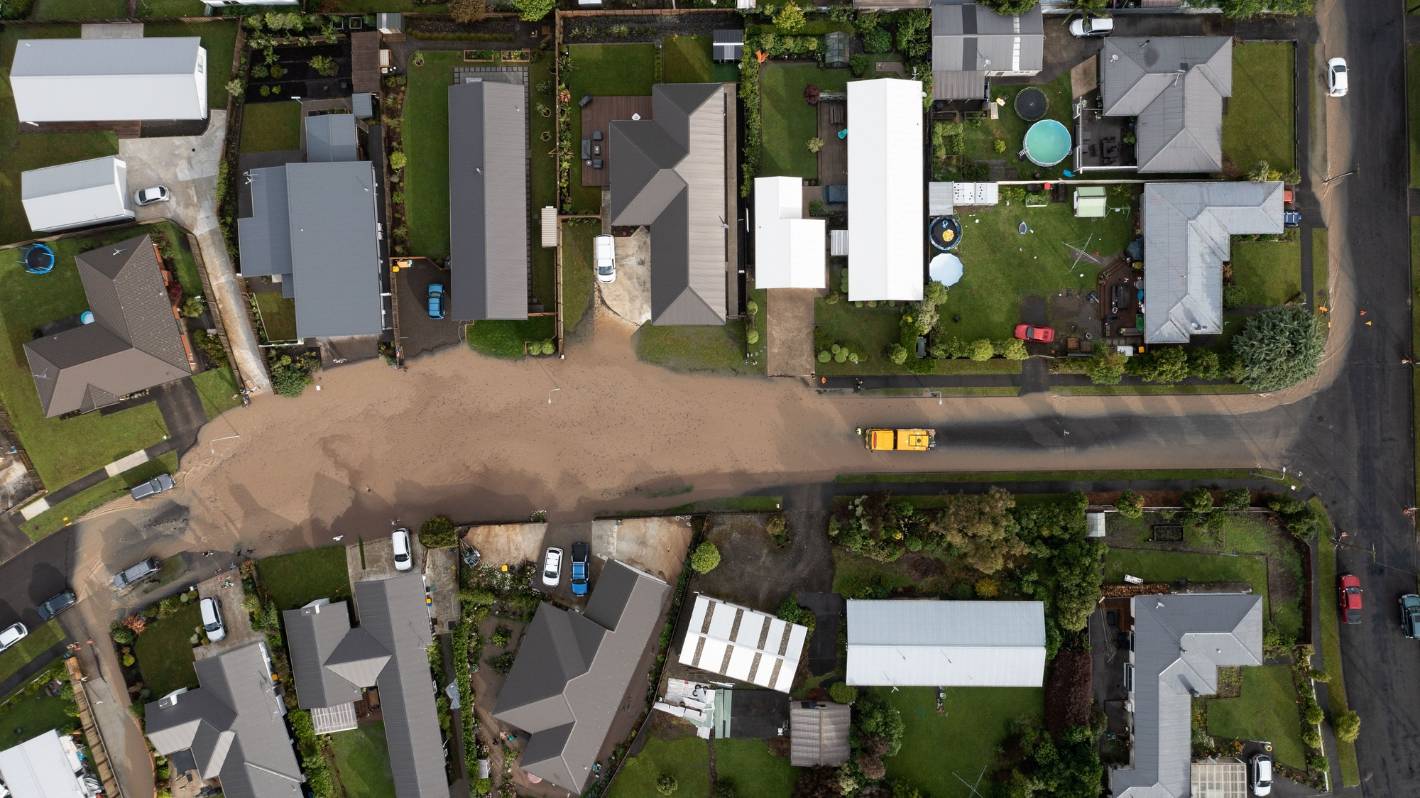 Residents are being told to be ready to evacuate as heavy rain in the Manawatū-Whanganui region has caused flooding in the town of Feilding for the second time in one week.

Fire crews have responded to several reports of surface flooding in Feilding on Wednesday and a pop-up welfare centre has been set up at St John Ambulance Hall on Bowen St for residents who may need to evacuate.

Water had only just begun to recede from homes and streets in the town after significant rainfall on Monday evening caused road closures and dozens of call-outs. But the forecast was for even more rain on Thursday, and there was a possibility that more flooding may occur in and around the Makino Stream, the local council posted online on Wednesday night.

At the scene on Wednesday night, Manawatū District Council infrastructure manager Hamish Waugh, who was door-knocking residents on South St who live by the Makino Stream, was telling them to pack their bags “just in case”.

READ MORE:
* Thunderstorm and flash flood warning worsens Wellington’s weather woes
* Taranaki backroads detour may be gone by the weekend
* SH2 to close to retrieve 35-tonne truck down side of Remutaka Hill

He said the floodgates had closed and there was nothing more the regional or district council could do to stop the flooding.

The Makino Stream was high, lapping at the base of a busy bridge turning onto Awahuri Rd. The rain had stopped by 7.30pm Wednesday but more was expected later on.

Waugh said: “The third wave is coming, we are expecting one or two more periods of heavy rain … the flood gates are activated … We’re not saying to evacuate. We’re encouraging people to keep an eye out.”

Those in Halcombe were advised to avoid flushing their toilets unless “absolutely necessary”, as the wastewater treatment ponds are inundated, the council said.

The Manawatū District Council posted to its Facebook page at 5.22pm on Wednesday, stating it was aware of surface flooding across Feilding.

“We’re working closely with Horizons to monitor the Makino Stream, and we will liaise with them if action is necessary. We’ve had queries about sandbags, which we don’t have.”

A second post at 5.34pm Wednesday said Pharazyn Rd and the Makino Floodgates at Reid Line were closed until further notice. Halcombe Rd was later closed from North St through to the Rangitīkei River Bridge.

“Please stay at home and don’t go sightseeing. Travel only if necessary, and please watch your speed around areas that are flooded, as wake from vehicles will travel through to people’s properties,” the council wrote.

Meanwhile, more than 1500 houses were without power in Feilding on Wednesday afternoon.

A Powerco media spokeswoman said power was cut to 1522 customers at 3.15pm after lightning struck electrical equipment. All properties were reconnected by 6pm.

Waka Kotahi NZ Transport Agency regional maintenance and operations manager Jaclyn Hankin said the heavy rain caused potholes to appear in the roads, and crews were doing their best to address it.

One image circulating online appears to show a giant sinkhole on Reu Reu Rd in Halcombe, north of Feilding and east of Marton.

“Our contractors have been out in the rain over the last couple of days, working hard to ensure that the state highways remain safe for motorists.

“Potholes and debris have appeared on roads across the region, so please keep speeds down and stay alert. We want everyone to get to their destinations and back home safely.”

It was expected to take some time to repair the potholes, especially while the severe weather continued.

“We need people to drive to the conditions for the safety of everyone on the roads, including our contractors who are doing a great job in very bad weather.”

MetService previously issued a severe thunderstorm watch for the area from 12.30pm to 8pm on Wednesday night, which covered the Whanganui, Manawatū, Tararua, and Horowhenua regions.