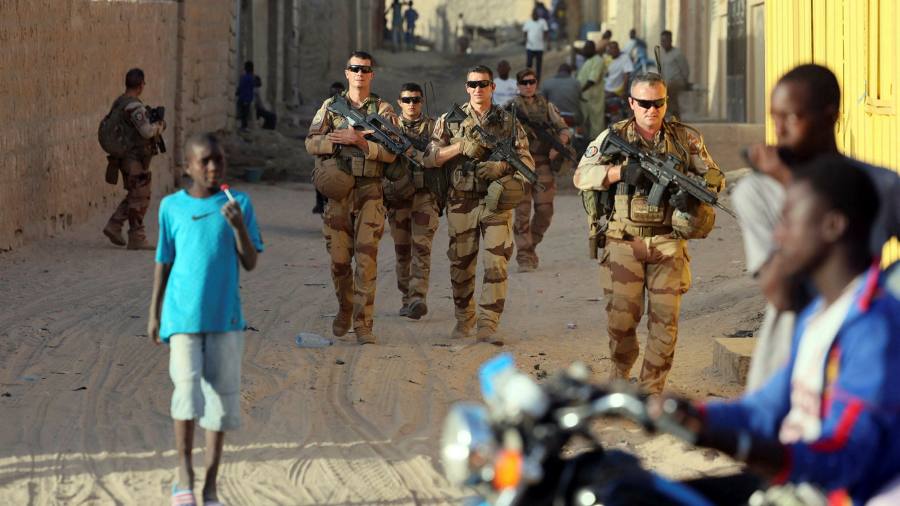 On his arrival in the Saharan Malian town of Timbuktu in 2013 to celebrate its liberation from Islamists with the help of French forces, France’s then president François Hollande was greeted as a hero and hailed with shouts of “Vive la France!”

Less than nine years later, France has handed over its Timbuktu base to Malian forces and the mood in the west African country is one of bitterness and anxiety.

Several hundred kilometres away in the capital Bamako, the French presence is still strong but Russian flags are also visible — on the dashboards of rust-bucket taxis; on sale in roadside stalls and at the occasional pro-Russian demonstration.

Like the Americans and their allies in their two decades in Afghanistan, the French-led Operation Barkhane has failed to eradicate the jihadi threat in Mali and the Sahel region.

Malian leaders have harshly criticised the French for a strategy they say has worsened the conflict and for their decision to halve their 5,000-strong military presence. They have turned to Russia, a shift that has consequences not just for security but also France’s influence.

Bamako is in talks to hire mercenaries from the Kremlin-linked Wagner Group, which is under US and EU sanctions and accused of war crimes. At the UN general assembly in September, Malian prime minister Choguel Maiga said France had abandoned Mali, leaving it with little choice but to seek “other partners”.

The talks with Wagner have infuriated Paris. After two coups d’état in Bamako in less than a year, France says that the Malian government lacks legitimacy and that a partnership with Wagner could jeopardise a fight against the extremists who have killed thousands and displaced millions across the Sahel. The Wagner talks make clear how far relations between the two have deteriorated, say diplomats and analysts in the region.

Although northern Mali is more secure than in 2013, violence has shifted into centre of the country where the majority of the 20m population lives. Targeted French killings of jihadis and joint operations with local forces have done little to quell the crisis.

Extremist violence has also spread to Burkina Faso, which has seen wide swaths of the country fall from government control, and Niger, where hundreds of protesters in November blocked a 100-vehicle Barkhane convoy in frustration. French authorities are investigating reports that its Barkhane troops were responsible for the deaths of two protesters.

This year was the most violent in the past decade for the three countries in terms of events such as terrorist attacks and battles, with 2,426 such incidents, compared with 244 in 2013, according to data from the Armed Conflict Location and Event Data project. In terms of fatalities, it was the second deadliest after 2020, with 5,317 deaths across the three countries, compared with 949 in 2013. Mali alone recorded 948 violent events in 2021, against 230 in 2013.

In June, French president Emmanuel Macron announced a drawdown of Barkhane forces. He has argued that the French military, which has lost 53 soldiers, can no longer compensate for the “non-work” of the Malian state. The decision came three months after the UN found that a French air strike had killed 19 civilians, including women and children, at a wedding party in central Mali. France denies that any civilians died in the bombing.

At the same time, Paris has made a series of strategic decisions that have rankled the Malians. Over the past two years, it has focused on the more brutal Islamic State in the Greater Sahara (ISGS) in the tri-border region between Mali, Niger and Burkina Faso, instead of Jama’at Nusrat al-Islam wal-Muslimin (JNIM), the consortium of al-Qaeda-linked groups that accounts for the vast majority of violence in Mali.

Mali was “wondering why France is focused on ISGS, which is about 10 per cent of the problem, instead of JNIM, which is 90 per cent”, said a western diplomat. A Macron adviser acknowledged that France had focused on the tri-border area, but said both groups were priority targets.

Many also blame the Paris-led western intervention in Libya where jihadis lived and trained. “They [the French] came to play fireman in Mali, but they set the fire in Libya,” said Boubacar Sidiki Sylla, the national co-ordinator in Mali for Urgences Panafricanistes, an anti-French, pro-Russian group active across francophone Africa.

With the lack of perceived results on the ground, resentment rooted in France’s colonial past has bubbled over. Macron has said he wants to break with Françafrique, the system of close commercial, economic and political ties that has defined the relationship since independence.

But critics say that the 44-year-old leader has instead maintained a paternalistic approach, such as when he summoned his older African counterparts to a château in Pau, southwestern France, last summer to insist on their public support for the military operation in the face of rising anti-French sentiment.

“He wants to be the boss . . .[but] we are a very proud people,” said former national assembly president Ali Nouhoum Diallo. One diplomat pointed out that the licence plates on embassy vehicles in Bamako are numbered in the order in which the countries recognised Mali’s independence, with France coming in at number 10. And yet, the diplomat said, “they demand this exaggerated respect, [which] does damage to them”.

The senior Macron adviser said the problem was not France’s attitude but that the Malian junta was breaking its commitment to hold elections in February, and was clinging to power it seized illegitimately. “Trying to make all this seem like a fight between Mali and the old colonial power is a pretty crude trap that we [won’t] fall into,” the adviser said.

This longstanding anti-colonial sentiment is meanwhile being exploited by Russia- and Wagner-linked groups, according to western officials, while Maiga’s fiery UN speech highlighted the contradictory nature of anti-French sentiment. “They are telling France to leave, but also attacking them for leaving,” said Michael Shurkin, an ex-CIA analyst and global programmes director at Dakar-based consultancy 14N Strategies.

Moussa Mara, who served as prime minister in 2014-15, said France was a convenient bogeyman for a junta that, like its predecessors, had no plan to fight terrorism. “There are some people who think that if it doesn’t rain in Mali, it’s the fault of France,” he said. “Putting France up as [the] opponent — that’s a strategic political decision. You get applause. It creates an opportunity to delay the election.”

Barkhane is the only significant counterterror force operating in the region, say analysts, and few even among France’s greatest critics believe weak domestic armies could effectively fight the jihadist threat. The UN’s 14,000-troop Mali peacekeeping operation Minusma is largely reactive.

Paris has, for years, tried to internationalise the counter-terrorism effort in the Sahel, but with little success. The US provides surveillance and intelligence and the UN provides logistical support. The special forces Takuba Task Force that France has long touted as the mission’s next phase includes troops from Estonia, Portugal, Sweden and other European countries, but remains largely French.

Among western allies, the reluctance to engage all out militarily is both political and practical — they recognise a reality clear to most Malians. “The conflict in Mali is not going to be resolved by military forces,” said Yeah Samake, an opposition politician. “It is more complex.”

Many Malians, furthermore, want talks with the jihadis, whose aims on the ground tend to be local or criminal rather than religious or ideological. Paris disagrees.

There are no Wagner fighters known to be in Mali yet, but two diplomats in Bamako and one senior Mali security source confirmed that there have been “suits on the ground” ironing out potential contract details, including surveying gold mines that might be used as payment.

“People are convinced that the French are there to steal their natural resources,” said Shurkin. “Meanwhile, they want to turn to the Russians, who are explicitly there for that purpose.”

With France drawing down and no one else coming in, said a western diplomat, it was little surprise Mali had reached out to Russia. “The junta is desperately asking every western country for military assistance . . . even the least martial European countries, but everyone says no,” said a western diplomat. “They are saying we are drowning in a sea of insecurity and we need to grab something.”

Even Diallo, a harsh critic of France right back to his student days in pre-independence Senegal, has few illusions about Russian help. “Mali can work with different partners to unify the country, but thinking the Russians will come here and die for Mali? No. You’re fooling yourself.”