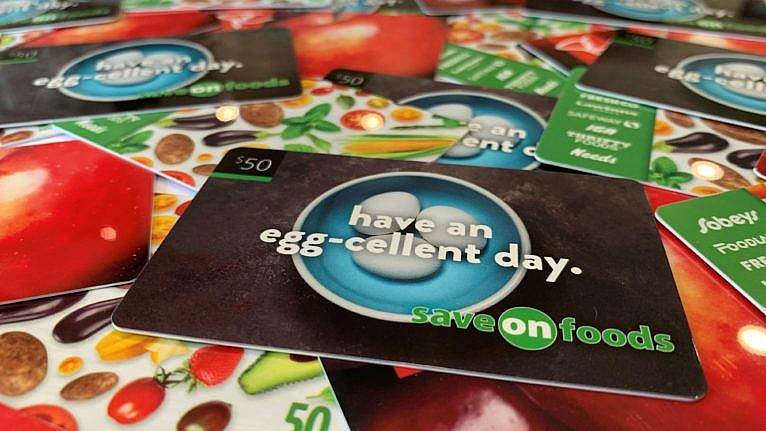 One foundation in Calgary has shifted from giving food to providing the ability to shop for it. Early signs suggest it serves families better.

A trip to the local food bank is for many Canadian families a holiday tradition. Parents drive to the store with their kids to purchase bounties of non-perishables to drop off at the local food bank, along with all the fixings for their own dinners, intending to teach their children the importance of giving back.

But for many families on the receiving end, this ritual is neither life-affirming nor edifying. Some travel long distances only to wait in hour-long lines for food that may not suit their religious, cultural or health needs. Others can’t afford the transportation. For many, the experience is imbued with stigma. “When you’re just handed things, you’re kind of expected to just take what is given to you,” said one single mom of two that took part in a study conducted by Calgary-based charity I Can For Kids Foundation. “When you’re able to go out and [grocery shop and meal plan] it just makes you feel more human.”

After distributing food hampers to families across the province for five years, I Can For Kids Foundation recently pivoted from food-relief charity to financial-empowerment charity, supplying $50 grocery store gift cards to thousands of families with the aim of targeting the root cause of food insecurity: lack of income. “We’re not saying [gift cards] are the answer,” says Bobbi Turko, the foundation’s co-founder and executive director. “What we are saying is that it’s a far more dignified and inclusive approach to supporting households that are experiencing food insecurity than a food hamper model can be.”

Substituting food hampers with purchasing power is part of a broader rethink of how to address hunger across Canada, as food insecurity rates rise, while the longstanding means of addressing it—food banks that depend on supply and Canadians’ ability to give—struggle to keep up.

The full results will be released in the New Year, but preliminary findings suggest that supplying low-income families with gift cards relieves financial stress, restores clients’ dignity and autonomy, and improves diet quality. “There’s this perception that people are poor because they’ve made bad choices and therefore we can’t trust them to make good choices,” says Turko. But the study’s early findings suggest the opposite: parents equipped with gift cards became more likely to buy nutritious food, as their children’s exposure to, and interest in, eating fresh fruits and vegetables grew.

The study also included 17 agency partners (social workers, caseworkers, and community facilitators) who serve as intermediaries between the foundation and recipients to ensure those in most need receive support. The laborious process of picking up and dropping off food hampers was often left to these agency partners, yet became so time-consuming that it sidetracked them from their chief responsibilities to offer assistance and support. The switch to grocery gift cards relieved this burden: internal evaluations of the program found the model is a more logistically efficient way for the agency’s partners to support their clients.

A greater sense of empowerment was observed in almost every recipient that participated in the study, says Yun Lee, one of the lead researchers from the University of Calgary. Lee is close to tears as she recalls one mother’s gratitude for being able to buy fruit for her kids to eat on a road trip, and another family who fulfilled their childrens’ desire for s’mores while shopping for a camping trip. “The autonomy to choose the foods that they put in their grocery cards has allowed parents to build special moments,” says Lee.

As a demonstration of what additional income can provide, the study’s results are compelling. The foundation plans to donate $44,000 in gift cards during the month of December, all purchased at a discounted rate offered by the participating stores—Co-op, Real Canadian Superstore, Safeway, Save-On-Foods and Sobeys. As the organization works through a long waitlist of families hoping to receive cards, and the results of the initiative become known, Turko is optimistic that Canadians will begin to rethink their charitable giving in the years to come.

“Donating food makes the donor feel good; it doesn’t always make the recipient feel good,” Turko says. “I hope that the results of the study open up a bigger conversation surrounding poverty reduction and that people will be a little more understanding of what people are going through that are experiencing poverty and food insecurity.”

Nathan Sing writes about food security and hunger issues in Canada. This holiday season, he is reporting on innovative initiatives and programs that address the roots of  food insecurity, with emphasis on how average Canadians can help.

Sing’s one-year position at Maclean’s is funded by the Maple Leaf Centre for Action on Food Security, in partnership with Community Food Centres Canada. Email tips and suggestions to nathan.sing@macleans.ca.