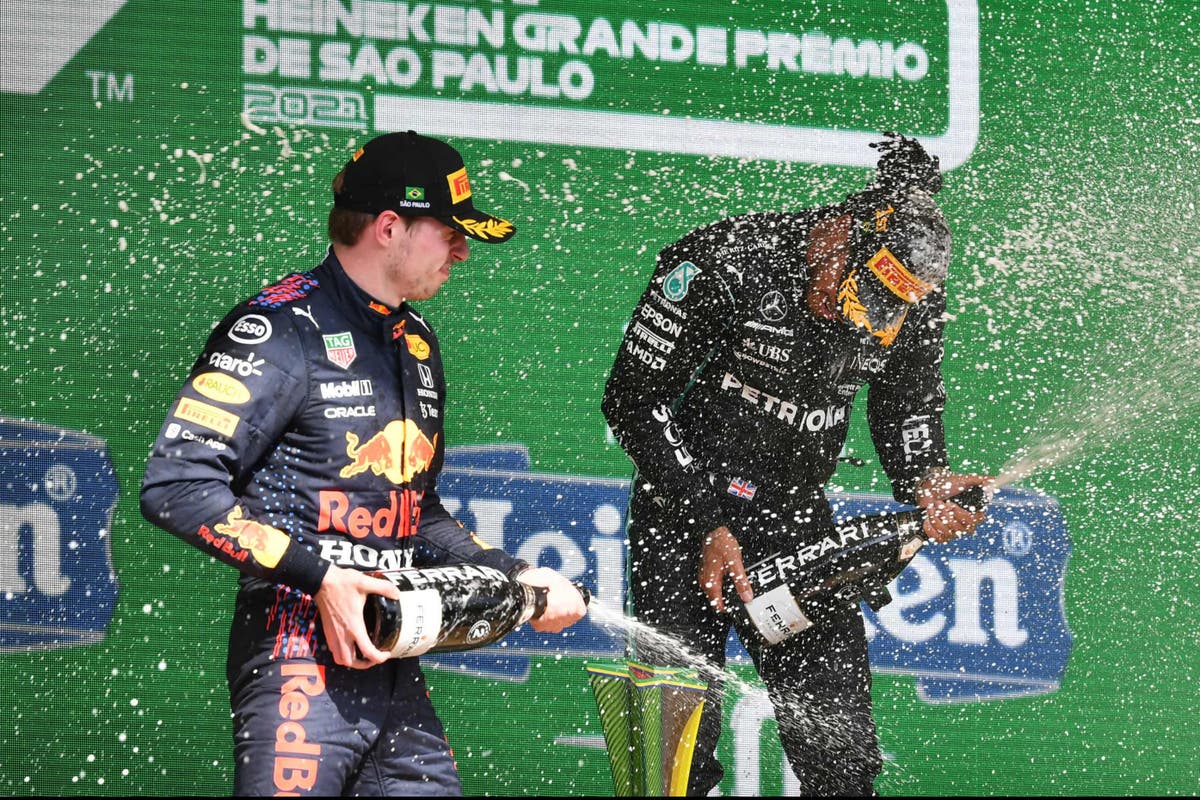 his season had always been designated as the moment Formula One would reignite.

But such aspirations appeared to be put on the back burner when the wide-ranging raft of regulation changes aimed at closing up the pack and improving the racing spectacle were delayed until 2022 amid the Covid uncertainty.

And yet this year has provided an unexpectedly captivating precursor with Lewis Hamilton and Mercedes’ dominance finally at an end. Quite how it ends, no one knows. In fact, trying to ascertain how events will unfold from one weekend to the next are nigh-on impossible.

In Brazil, Hamilton had every obstacle imaginable thrust in his way. First came the news he needed a new engine, paving the way for a costly five-place grid penalty. Then his rear wing was deemed illegal – albeit by just 0.2millimetres – so he was sent to the back of the grid for the sprint race.

He scythed his way through the field from last to fifth so smoothly that McLaren’s Lando Norris suggested he needed to be on three wheels to give the rest a chance.

Come the main event on Sunday, Hamilton made his way from 10th – with that five-place penalty applied – to take the win, impressively avoiding contact as he was driven off the track by Max Verstappen, the legality of which was still being discussed long after F1 had packed up in Sao Paulo and turned its attention to Qatar this coming weekend.

Despite another near coming together on track, there were no barbs exchanged between the championship protagonists. Listening to Hamilton’s race radio, it was clear he was riled by the stewards’ decision not to take any action.

But outside the cockpit, and with that moment 23 laps from the end proving inconsequential in the eventual race result, he remained sanguine. His overwhelming outlook on a thrilling race was simply that this is how an F1 world championship should be.

As for Verstappen, he felt not remotely in the wrong, the pair leaving it to their team bosses to take up the squabbling.

On the surface, a disqualification for a rear wing just 0.2mm outside the legalities of the sport’s rulebook, particularly in light of the fact that part had been damaged, was harsh.

And the Austrian took further umbrage at Red Bull yet again being able to alter its own rear wing in parc ferme, a move only allowed on safety grounds.

The accusations and counter accusations are only growing between Mercedes and Red Bull. Christian Horner’s finger-pointing was at the change in pace of the Mercedes. A week ago in Mexico, it was an also-ran, its driver in Hamilton effectively waving the white flag in the title race.

The new engine clearly made a difference but Horner’s argument was that leap in pace could not be put down to the power unit alone.

Whatever his gripe, he said there were no plans to protest in Brazil, although the specifics of that comment suggest a protest could yet follow. On what grounds remains to be seen but he pointedly called out the FIA and said he trusted it to police the sport correctly.

FIA race director Michael Masi spent more time in discussion with Red Bull and Mercedes than he would have cared in Brazil, both teams ensuring their disquiet was aired publicly.

Wolff versus Horner has created a tetchy sideshow that has made for entertaining viewing and added to an already feisty championship battle.

But it has not taking away from the main attraction – Hamilton versus Verstappen. As for what happens next is anyone’s guess.

A week ago, the momentum was with Verstappen, the F1 paddock relocates to Qatar this week with the momentum with Hamilton, albeit still with a 14-point deficit in the standings.

The speed of the Mercedes suggests it has the edge but, adding to the unknown quantity of this season finale, both Qatar and the subsequent Saudi Arabia have never been raced on in F1’s history. What happens next? I don’t have a clue.