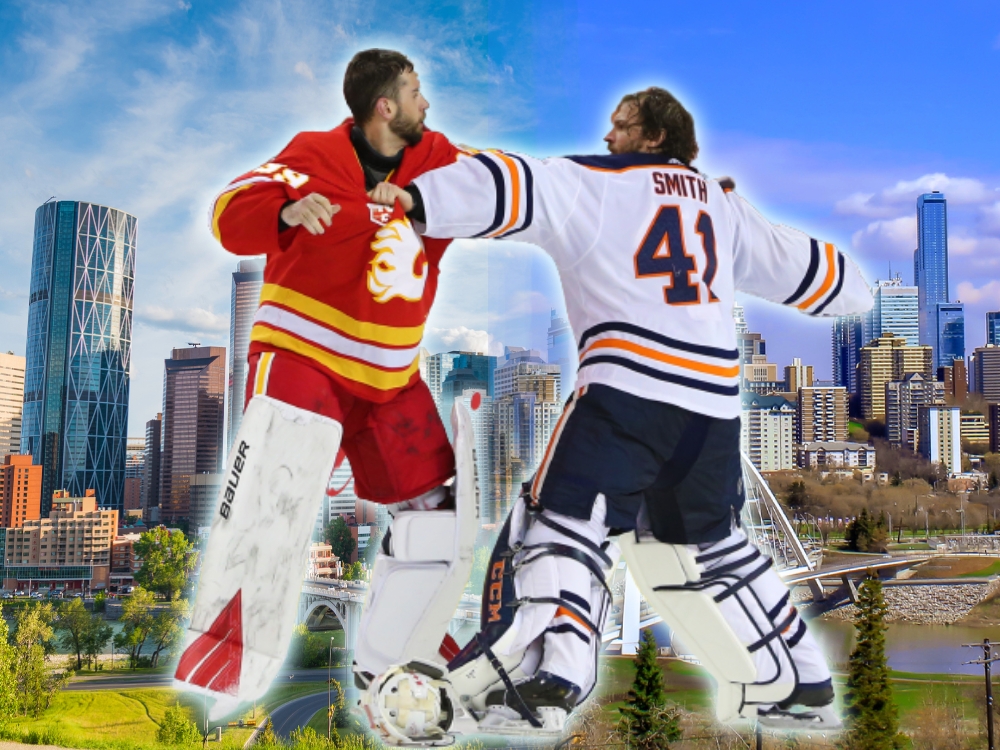 A curious thing happened late last Sunday night. Scores of Edmontonians were watching a Calgary Flames game, and in many cases, even cheering for them to win.

Obviously they weren’t newly converted Flames fans, but rather they were tuning in to see who the Edmonton Oilers would play against in round two of the Stanley Cup finals. Once Johnny Gaudreau’s puck flew over Dallas Stars’ netminder Jake Oettinger’s shoulder in overtime, rejoicing was heard across the province as the Battle of Alberta was set in motion.

The Battle of Alberta had taken on legendary status amongst Edmonton and Calgary hockey fans, often generating the liveliest games during the regular season. Not since 1991 have the two teams met to battle in the playoffs. It’s fair to say playoff fever has reached fever pitch in both cities.

Rivalries in the sports world go hand in hand like beer and hockey, but what makes the Oilers/Flames competition so intense is that for many fans it’s personal. The divide between Alberta’s north and south has existed for well over 100 years, pronounced by Canadian Pacific Railway’s decision to move its planned route through Western Canada away from Edmonton and via Calgary instead. It was a decision that allowed Calgary to prosper at a quicker pace than Edmonton, causing a rift that still has ramifications to this day.

Alberta’s capital may be Edmonton, but it’s Calgary that gets all the credit. For most Canadians when they think of Alberta they conjure up images of cowboys on wind-swept prairies with the majestic Rocky Mountains standing guard on the horizon, i.e. Cowtown. There’s no denying Calgary is a dazzling city, from the gleaming glass towers of its downtown to the gentle Bow River and the exalted Kananaskis Country to the west, but Edmonton has soul.

The rough and tumble blue-collar stereotype thrives in Edmonton’s many diverse neighbourhoods, where the ‘work hard, play hard’ mantra was seemingly coined. Edmonton may not have noticeable landmarks such as the Calgary Tower, but if you look beyond the giant mall you’ll see a fertile river valley from which the city is centred around, a rich arts and culture scene, and above all else, unwavering support for its storied NHL team.

Ultimately, there is little difference between an Edmontonian and a Calgarian … other than the cowboy hat. Centering a city’s identity on a professional sports team is absolutely silly. Battle of Alberta supporters know this and support it through playful mayoral wagers and gentle ribbings from friends and family up and down the QEII. Pity the poor people of Red Deer, the halfway point between Edmonton and Calgary, forced to pick sides in this playoff series. Perhaps one day Canada’s percolating civil war can finally be played out in spectacular West vs East fashion with an Oilers vs Toronto Maple Leafs Stanley Cup final, but that’s contingent on the Leafs, you know, not choking in the first round.

After years of pandemic lockdown and divisive politics, Albertans look forward to watching a friendly competition that won’t tear apart families or leave bitter feelings, unless you’re on the losing end of a bet, of course. Let Connor McDavid and Zack Kassian settle this provincial feud on ice by beating the tar out of Johnny Hockey and Matthew ‘Turtle’ Tkachuk.

Sign up to receive daily headline news from the Edmonton SUN, a division of Postmedia Network Inc.

The next issue of Edmonton Sun Headline News will soon be in your inbox.