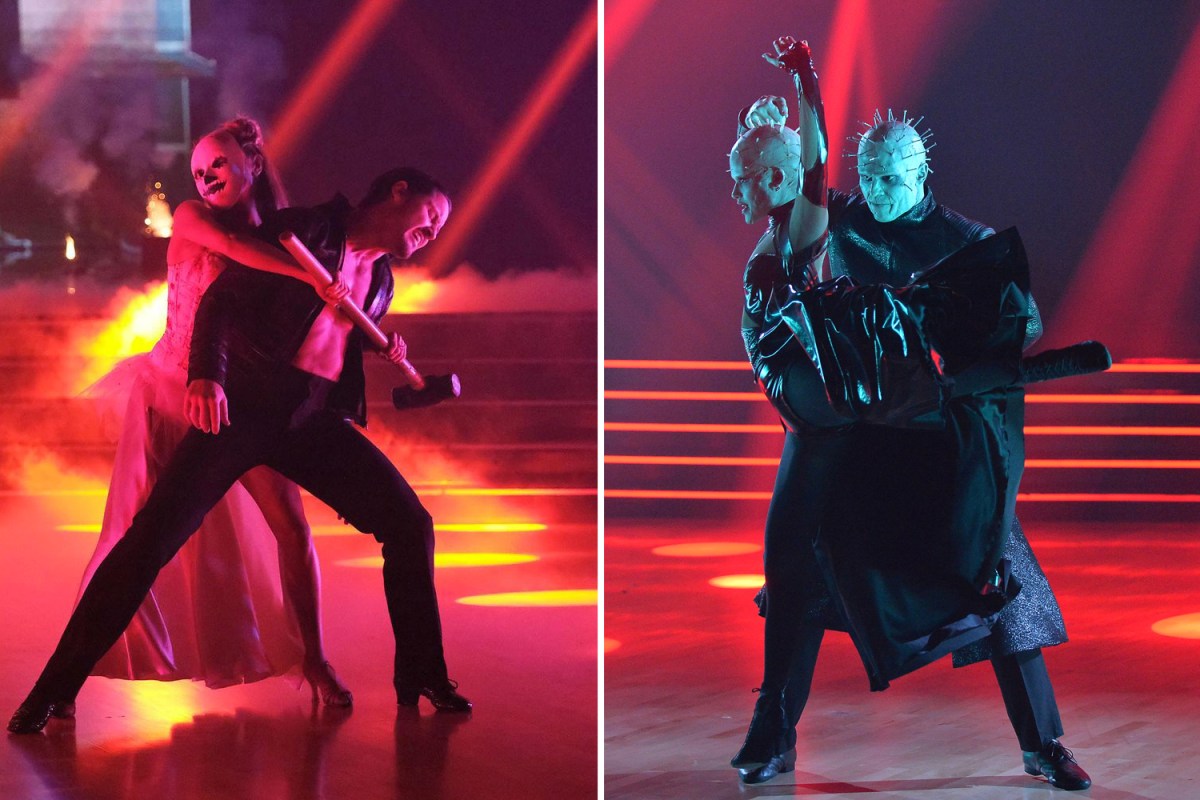 They aren’t limiting their looks to a single day either.

The costumes started popping up well before the spookiest day of the year.

Whether it was for a show or just for Instagram, the stars brought their A-game.

Some even rocked more than one look, and fans couldn’t get enough.

JoJo, 18, ditched her adorable bows and brightly colored clothes in favor of a truly terrifying look on the set of Dancing With the Stars.

She was unrecognizable as she suited up as Pennywise, the nightmarish clown.

The duo performed a spooky, but delightful, jazz dance to “Anything Goes” by District 78 featuring Patrice Covington.

While fans loved the routine they were left terrified — but amazed — by JoJo’s costume.

One follower on Instagram wrote: “Wow. Hair & makeup are NAILING it.”

“If this ain’t terrifying idk what is,” another added.

Megan thee Stallion didn’t ditch sexy all together, but put a strong focus on scary instead.

The rapper, 26, posted photos of herself dressed in a Hellraiser costume on Instagram.

She captioned the post: “Pain has a face. Allow me to show you. Gentlemen I am pain #hottieween.”

She looked almost nothing like herself, though her signature curves were still on display in the Halloween getup.

Fans were blown away by her creativity.

Another fan added: “You won.”

“You didn’t have to snap this hard,” a third follower wrote on social media.

Heid Klumi, the queen of Halloween, has been teasing her look — and her annual epic Halloween bash — for some time.

The super model posted photos of herself sporting what looked to be an open wound over much of her back.

She also appeared to be wearing dark eye makeup, though she kept her face obscured in most of her recent posts about her costume.

Heidi is known for taking Halloween very seriously, but this year she’s gone as far as creating a video element.

She posted a behind the scenes clip on Instagram, which showed her cackling maniacally in a shower stall, shoveling meat into her mouth, and sitting in the makeup chair to take on her new look.

The video appears to provide some back story for Heidi’s costume — presumably a zombie — and how she became undead.

Heidi shared a second clip, this time with the caption: “When there’s no more room in hell the dead with walk the earth…”

Comments have been disabled on the Halloween posts, but fans always anxiously await her costume reveal.

KREEPING UP WITH THE KARDASHIANS

Kourtney, 42, is also known for putting together elaborate Halloween costumes.

Both shared photos of their look on Instagram. Kourtney appeared in photos wearing a blonde wig, fishnet top and leather pants.

Kourtney captioned a series of photos of her and Travis in costume: “‘Till death do us part.”

The caption appeared to be a nod to their recent engagement.

Travis commented on the photos: “our love will never dieeee.”

DANCING WITH THE MIZ

Mike “The Miz” Mizanin transformed into Pinhead during a Halloween-themed episode of DWTS.

The wrestler gave fans a look into the making of his look via Instagram.

Many were blown away by how different The Miz looked.

One fan wrote: “Turned out amazing.”

In a separate Instagram post he revealed that it took “6 hours of #makeup” to achieve the look.

The Miz and partner Whitney Carson performed a Paso Doble to “Wicked Games” by Raign.

Their performance earned them a high score of 34 out of 40, with Len Goodman calling it a “top performance.”

PREPARE FOR THE PURGE

Olivia Jade and partner Val Chmerkovskiy suited up for The Purge during the DWTS Halloween episode.

The pair’s look scared audiences, but their dance moves wowed them.

They performed a Paso Doble to the song “Beggin” by Maneskin, scoring a 36 out of 40.

She showed of a different version of her dance look via Instagram.

The post came after Olivia cleared up rumors about her relationship with Val, assuring viewers it’s strictly platonic.

Jason Biggs and his family opted for a group Halloween scare this year.

He and wife Jenny Mollen dressed up as vampires. They posed with blood dripping from their fangs.

Their children went as a ghost and skeleton. Their faces were covered from the camera in the photos.

He captioned the photo: “Casual night with the fam.”

One commenter wrote: “Bite that neck!”

“So good,” another added.

Olympian Ryan Lochte, wife Kayla Reid and their children dressed up as the Addams Family for Halloween.

The swimmer posted with a cigar in his mouth and a cane by his side. His wife wore a long dark wig and slinky black dress.

“This is perfect!!” another commented.

Amy King — cousin to the Duggar siblings — suited up as a mummy for Halloween.

She shared a photo on Instagram of herself wrapped in white.

Amy had her son by her side for the adorably spooky Instagram Story photos.

Celebs scariest Halloween costumes from Dancing With The Stars this year including JoJo Siwa, Olivia Jade and The Miz