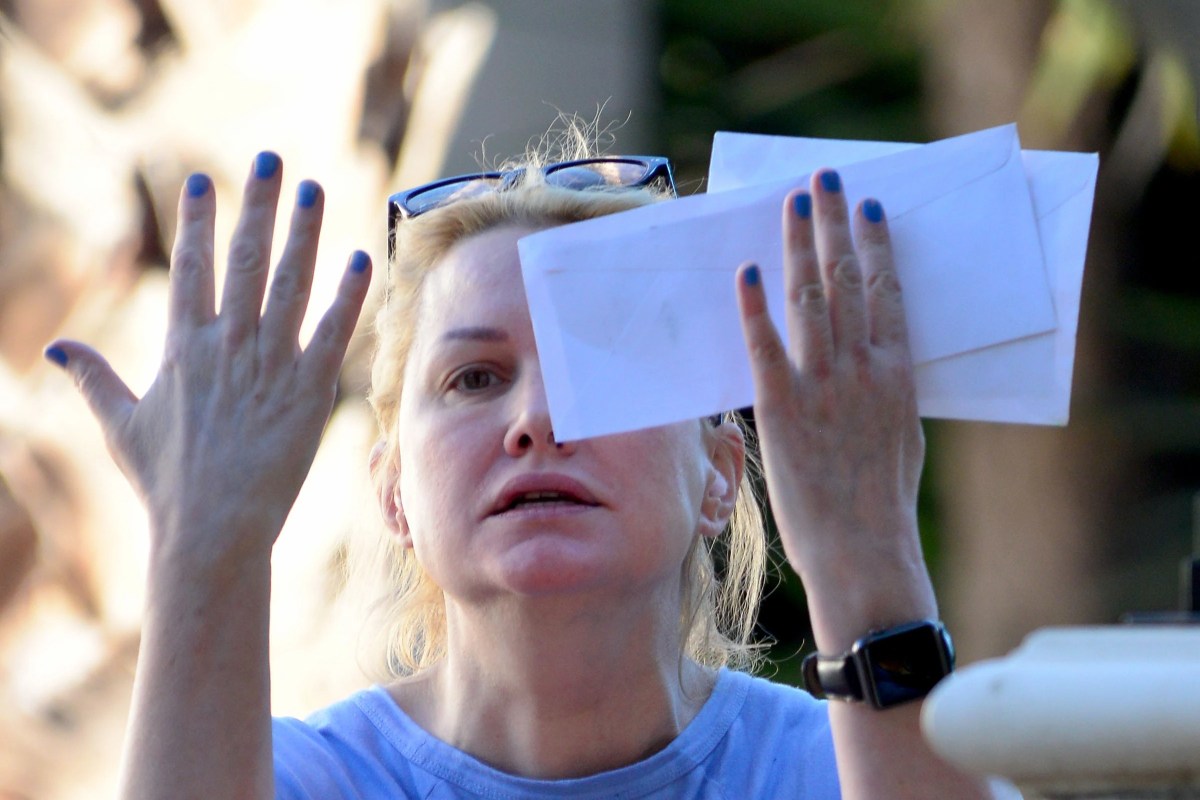 IOAN Gruffudd’s ex-wife Alice Evans has been spotted waving her ringless hand around just hours after accusing him of having a three year affair with her close pal.

Furious Alice, 49, was seen outside of her home in Los Angeles the day after she made the shock claims.

Alice has accused her estranged husband of having an affair with Bianca for three years behind her back, and was today seen waving her ringless hand at photographers.

Wearing a blue t-shirt and sunglasses she went to collect post before letting a friend into the property.

She greeted the female pal into her home, hugging her before showing her left hand off to show that she had removed her wedding ring.

The actor, who wed Alice in 2007, filed for divorce in March after she accused him of gaslighting her.

Following her estranged husbands Instagram post, she ranted:  “So it turns out that my husband, after two years of telling me I’m a bad person and I’m not exciting and he no longer want so to have sex with me and he just wants to be on set abroad…


Phillip apologises for ‘cultural appropriation’ as This Morning visits Glasgow


Universal Credit shake-up so 2million can keep an extra £1,000 a year

“Has been in a relationship for THREE years behind all our backs. Good luck, Bianca.”

Alice first spotted they were dating after she noticed Ioan shared the exact same picture as Bianca, who she was friends with.

Ioan had shared a picture of himself cuddling up to Bianca, writing: “Thank you for making me smile again.”

Bianca is also an actress and producer, who has starred in TV series Bloodline.

Alice claimed Liar star Ioan had “walked out” on her after saying he “no longer loves her”.

She broke the news to fans in a since deleted post on Twitter, explaining that her husband had given very few details about his decision.

She wrote: “Sad news. My beloved husband/soulmate of 20 years, Ioan Gruffudd, has announced he is to leave his family, starting next week.

“Me and our young daughters girls are very confused and sad. We haven’t been given a reason except that he ‘no longer loves me.’ I’m so sorry.”

Alice, who met Ioan on the set of 2000 film 102 Dalmatians, accused him of “gaslighting” and “mentally torturing” her, adding she was “very confused and sad” in an emotional statement.

Ioan later said: “Look, as I said before, it’s an extremely difficult time for the family.

“Our thoughts are with our children obviously right now and I’d really respect a little bit of privacy right now, thank you.”