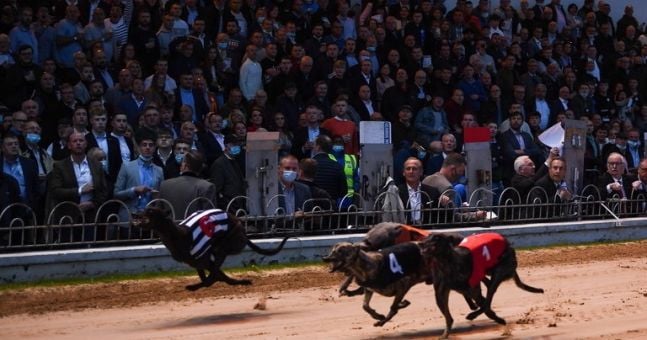 The build up to this year’s English Derby seems to stretch on longer than normal but the classic finally got underway at Towcester on Thursday evening and it was certainly worth the wait. From an Irish point of view, Skywalker Barry and Da Bold Freddie were the highlights but the undoubted star of proceedings was Lautaro and his trainer Patrick Janssens.

Lautaro is a greyhound with a huge reputation and he fully justified it with a brilliant, foot-perfect display as he smashed the track record. In victory he completed an incredible four-timer for Patrick Janssens.

The Irish have a far stronger hand in tonight and Saturday’s sessions and they can be expected to have a number of winners of the coming days. Of the Irish in action this evening, Bobsleigh Dream, Ballinabola Ed, Kildare and Scarty Yank are all strongly fancied to come out on top.

In fact, it would be no surprise if Cape Cloud and Coolavanny Calvn won tonight either. The latter has come in for strong support in the ante-post market but faces a tough opening round assignment with the defending champion, Thorn Falcon, amongst his rivals.

That isn’t the clash of the night, however. Instead that involves two of Ireland’s very best, Part Blake and Singalong Sally. The pair meet in Heat 12 where the start will be of prime importance. The pair are drawn side by side in three and four with Singalong Sally expected to edge inwards on her rival.

Tomorrow night’s heats should provide further Irish success. Deadly Showtime and All About Ted stand out as the best chances although plenty others including Barefoot Supremo, Wide Open and Romeo Magico also have strong claims in their respective opening round assignments.

Whatever happens over the next two nights, there are plenty of twists and turns to come in the five weeks leading up to the final on June 25th.

On these shores, it’s also a very busy period of the calendar. The Sporting Press Irish Oaks gets underway at Shelbourne Park tomorrow night and the reappearance of Susie Sapphire is sure to attract a few extra punters through the stiles.

The Derby, Puppy Oaks and Easter Cup champion is also the defending Oaks champion and, while she has been handed a tough opening round assignment, should again show why she is regarded as one of the greatest to ever race.

She motored around Shelbourne Park in a prep trial last weekend and has been reported a perfect order by her trainer, Owen McKenna. If she is to defend her crown she needs to account for some hugely talented rivals in the coming weeks. Scooby Duchess and Ballymac Ariel are closest to her in the outright betting but there are plenty including Maries Wedding, Droopys Gloss, Droopys Request and Illnotbeback that will have plenty of support also.

The stars of the future dominate the landscape this evening at both Tralee and Kilkenny. At Tralee, Tullig Cryname seems to have the Lee Strand 550 at his mercy after posting a brilliant 29.39 in last week’s quarter finals. He looks likely to continue his winning ways.

Thing are a little tighter at Kilkenny in the Champion Open Unraced Stake. Another Holiday was the standout performer last week but faces a mighty tough test in the opening semi-final. If he does everything right, he will again take some stopping but the brilliantly fast Pablo Escobar is nominated as a massive danger. The second semi is also very competitive although the nod goes to Vixons Showman on the strength of the draw.

The top-class action doesn’t end there, however. On Sunday, the focus switches to Clonmel where the second round of the Larry O’Rourke National Produce Stakes should provide more world class performances. Recent Con & Annie Kirby Memorial winner Sword Rex was a stunning winner in 27.93 last week and a repeat of that run would see him tighten his grip further at the head of the outright betting.