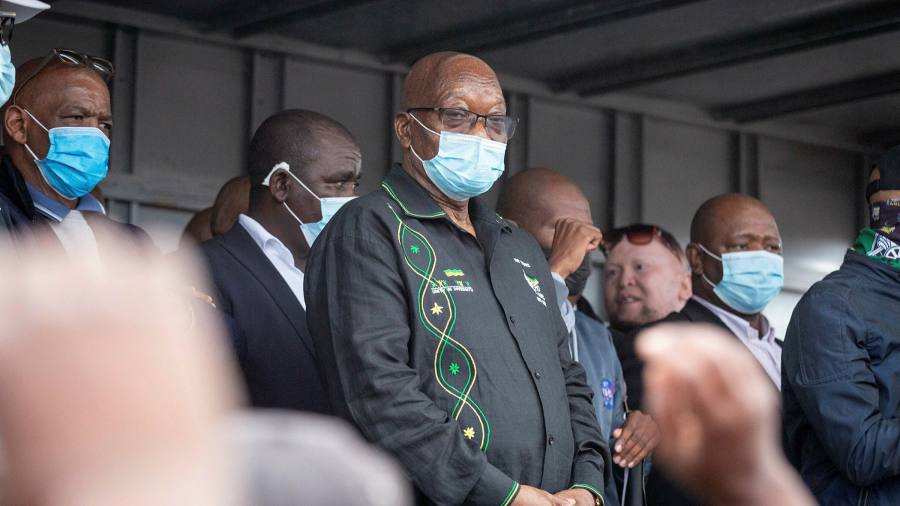 Jacob Zuma is to be released early from prison after the former South African president was found eligible for medical parole two months after being jailed for contempt of court — a sentence that sparked the country’s worst post-apartheid violence.

Zuma was handed a 15-month sentence by South Africa’s constitutional court in July for defying its order to attend an inquiry into claims of corruption during his nine-year presidency, which ended in 2018. But his parole had been “impelled by a medical report”, the country’s correctional services department said on Sunday.

The former head of state, who is 79, had been receiving treatment in the medical services wing of Estcourt prison in KwaZulu-Natal province, where he was being held. He was transferred to hospital outside the jail and underwent an unspecified surgical procedure last month, according to correctional authorities.

Zuma’s early release comes at a tense moment for President Cyril Ramaphosa, who is trying to continue a battle to root out systemic graft in government despite infighting in the ruling African National Congress over his predecessor’s fate.

Zuma’s imprisonment was widely seen as a victory for the rule of law, but reprisals by his supporters triggered days of arson, looting, and attacks on infrastructure that killed more than 330 people in KwaZulu-Natal and Gauteng, two of South Africa’s most populous regions.

The violence, which Ramaphosa called a “failed insurrection”, ended only with a massive deployment of the army on to the streets.

South Africa has released other high-profile inmates on medical parole in the past, most famously Schabir Shaik, an ally of Zuma who was paroled while serving a 2005 sentence for corruption in 2009 on the grounds that he was terminally ill. He is still alive.

Medical parole was also given to Jackie Selebi, a former police chief convicted of corruption in 2012, before he died in 2015.

“Apart from being terminally ill and physically incapacitated, inmates suffering from an illness that severely limits their daily activity or self-care can also be considered for medical parole,” the correctional services department said on Sunday.

Zuma “will compete the remainder of his sentence in the system of community corrections” under supervision and he could be sent back to prison if he does not comply with conditions, the department said. Community corrections in South Africa can include house arrest.

Last month Zuma’s trial on longstanding corruption charges relating to a 1990s arms deal was also adjourned after his lawyers sought a delay on medical grounds. The trial is due to resume this week.

Zuma repeatedly refused to attend the anti-corruption inquiry, which has now wrapped up testimony after dozens of witnesses implicated him in the looting of state contracts and manipulation of appointments to aid allies including the Gupta business family. Zuma and the Guptas have denied wrongdoing.

Even before Zuma’s release the ANC was reeling from a failure to register candidates in local elections, which could lead to historic losses for the party across South Africa’s towns and cities when they are held in two months.

Last week the constitutional court ruled out a postponement of the polls and said the vote must be held by November 1 at the latest.

Opposition parties could win control of dozens of municipalities from the ruling party, which lawyers say is unlikely to secure a reopening of the registration of candidates.